At a big press event on Thursday, Facebook plans to launch new ways to filter the news feed. These include a Photos feed of Facebook and Instagram photos, as well as a revamped Music feed of what friends are listening to, concerts, and new albums, according to multiple sources both within and close to Facebook. Larger images and image-based ads in the web and mobile feeds are coming too.

[Update 3/7/2013: Facebook just held its press event and my sources were right. It launched content-specific feeds for Photos, Music, and more, plus increased the size of photos and ads. Read all about it here and check out our hands-on video.]

Why is Facebook adding new streams? Because we are information junkies. Give us a feed and we’ll read it. But when we scroll so far we hit re-runs – we hit the road. So Facebook has a plan to give us something different to look at starting March 7th. If the “new look” for the news feed that it’s unveiling works, it could get us spending more hours on Facebook and seeing more — and more intense — ads.

Facebook has neglected the news feed, which has functioned largely the same since it launched on the web in 2006, and on iPhone in 2009. A column of friends’ faces on the left, their status updates to the right, and a whole lot of white space. Content-specific feeds have been hard to access, and the “Top News” or “Most Recent” sorting options mostly re-shuffle content rather than surfacing different stories.

Speaking on the condition of anonymity, a Facebook employee, a member of the social ads industry, and several developers concurred that multiple feeds and larger images in posts by users, Pages, and ads are what’s in store for Thursday. 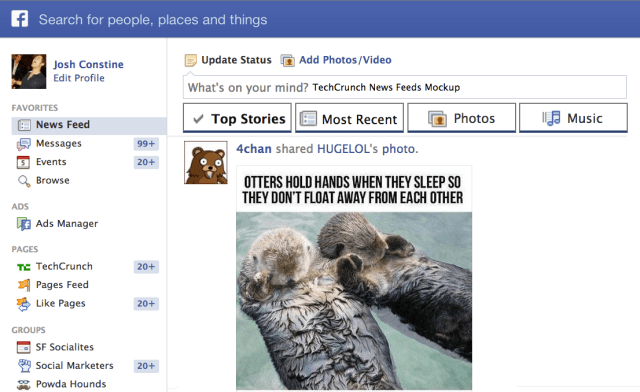 As for what’s not confirmed for this week is the employee-only test build of a radically redesigned mobile feed in a native iOS app that I witnessed a few months ago. One source said that they didn’t think this major mobile redesign is ready yet, contrary to my initial speculation when the launch event was announced. All in due time with that one. If it does launch this week, it could be a standalone app like Camera, or an option in the primary apps.

Before I get to the details about what my sources say is launching, let’s look at some supporting evidence and reasons why these are the right moves for Facebook. If you want the abbreviated version, skip to “So What’s Launching?”

Over the last year, Facebook has been piling up some dedicated, content-specific feeds. But they’re tough to find. Just after its September 2011 developer conference, the company debuted a Music feed, which it’s been slowly adding more content to. At first it was just what friends were listening to in apps like Spotify, but now it includes updates from musician Pages, upcoming albums and nearby concerts, as well as suggestions of music you might like. Few users know about it, though, as access is hidden deep in the Apps section of the sidebar.

Considering how popular link discovery sites like Reddit have become, it’s strange that Facebook doesn’t highlight its links feed anymore. The tough-to-find link lets you see all the websites friends have shared. 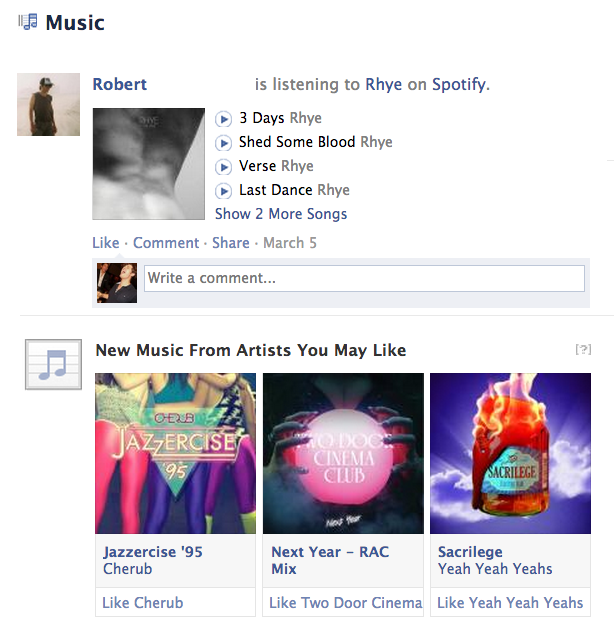 In October 2012, Facebook added a Pages-only feed that only shows updates from Pages you Like. There’s also the recently tested “My Offers” feed and even a forgotten Notes feed.

What all these separate feeds have in common is that they’re buried in the sidebar navigation menu and scattered across categories like Favorites, Pages, and Apps. If Faebook surfaced at least some of them in a more prominent, cohesive way, we’d be a lot more likely to switch to them when we finish reading the main feed.

Feeds That Don’t Exist But Should

When I talked to product manager Josh Williams ahead of the launch of Facebook’s new location-discovery service Nearby, and to CTO Cory Ondrejka at a Facebook reporters event, both said there were interesting things to be done with content-specific feeds. For example, stories shared from third-party Open Graph apps like Instagram, RunKeeper, Foursquare, and Foodspotting could benefit from their own feed designed to show what friends are up to off Facebook and help you find new apps to download.

When Facebook launched the Music feed the day after f8, I suspected “news” and video feeds to launch, but they never did. The lack of a “news” news feed was odd considering Facebook wants to compete with Twitter as a place where people discover…news. The lack of a video feed of what friends had been watching was actually the result of a legal ban. But in December the U.S. government eased restrictions from the Video Privacy Protection Act, paving the way for a feed of Netflix and Hulu activity.

Most surprisingly, there’s no feed of just photos, though there used to be. Now the Photos sidebar bookmark just leads to your own images and albums, which isn’t very helpful. A photo-only feed viewed full-screen or at a much wider width could be a hit. It’s been very successful for Instagram, and Facebook has been doing its best to take cues from its fresh and beloved acquisition.

Zuck Said The Feed Will Get A Richer Design

CEO Mark Zuckerberg himself said the news feed needs to evolve to be more vivid. Smartphones and fast connections make it much easier to share media than when the feed first launched. As Business Insider mentioned last week, Zuckerberg said on the Q4 earnings call that:

“As our news feed design evolves to show richer kinds of stories, that opens up new opportunities to offer different kinds of ads as well…One of the product design principles that we’ve always had is we want the organic content to be of the same basic types of formats as paid content, right? So, historically, advertisers want really rich things like big pictures or videos and we haven’t provided those things historically. But, one of the things that we’ve done in the last year is you’ve seen the organic news feed product that consumers use moving towards bigger pictures, richer media and I think you’ll continue to see it go in that direction. And, I think that a lot of the success of products like Instagram is because of that. It’s a very immersive – even on a small screen, just – it’s a wonderful photo product.”

The key word in Zuckerberg’s comment is “immersive.” Facebook’s web and mobile feeds are full of chrome. There are always-visible navigation bars on the top of both web and mobile, as well as sidebars galore on the web. Facebook tried to give the news feed a more real-time feel last year with Ticker, but a lot of people hate it, ignore it, or take advantage of Facebook’s kind option to minimize it.

By taking the navigation chrome, sidebars, and Ticker and trimming them down, hiding them while we browse, or cutting them entirely, Facebook could free up a ton of space. It could use that to expand the width and height of the feed so it could show more stories and bigger images. This would keep us focused on the beautiful content shared by our friends, reduce exhaustion, and keep us scrolling. 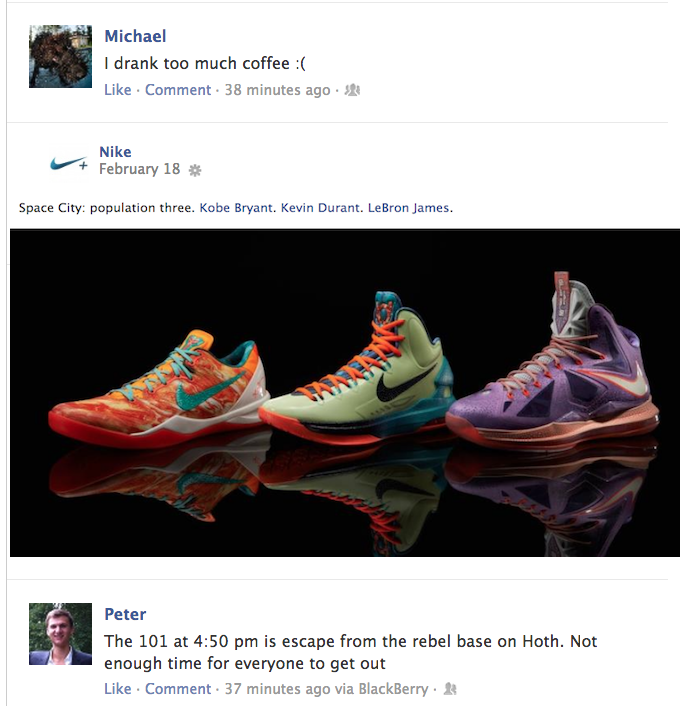 It would also throw a bone to advertisers that they’ve been barking for for years. The top request from advertisers to Facebook is “we want more attention-grabbing ad units like the auto-play videos, flash units, and home page takeovers we get elsewhere on the web.” Facebook has largely refused. The nine-year-old company only launched its news feed Sponsored Stories ads two years ago and mobile ads one year ago. It didn’t want to interrupt or distract from the user experience.

But by upping the size of images and stories shared by users, Facebook could give the same to businesses without the ads being an eyesore. It could command higher prices, too. Unlike Gifts, game payments, or even search which aren’t core to Facebook, better news feed ads could help the social network make money off its most trafficked and addictive property. Even earning a little more per feed ad could make a huge difference to its bottom line. It might even be enough to convince investors that Facebook is ready to play ball with business, which could finally get its stock price back up to the $38 IPO mark it fell from.

That’s all the why. Here’s the what. On Thursday, Facebook will introduce a new design for the news feed that prominently offers the option to switch between different content-specific feeds. Two sources said that on the web, buttons located at the top of the feed below the search box will let users switch to view one of the different feeds at a time. It’s unclear if Facebook will use the same design in the mobile feed. I think it’s more likely to prominently place the options to switch between the feed in the navigation sidebar if it doesn’t overhaul the mobile feed’s design entirely.

One of the dedicated feeds will be a Photos feed of images uploaded to Facebook and Instagram. This will make the most pronounced integration of Instagram into Facebook since its acquisition. Photos have long been its most popular content type, but one that’s been underutilized without a dedicated feed, so this could be a huge win for Facebook. Instagram showed the power of photos alone, and the new Facebook Photos feed could get people browsing for hours. There will likely be an option to browse this feed full-screen, as if it were one big album. 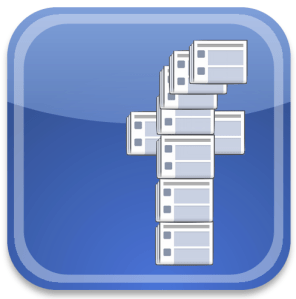 Several sources say a Music feed will also be featured. It will show what friends have been listening to on services like Spotify, and Rdio, as well as upcoming nearby concerts, recently released albums, posts by musicians that users Like, and suggestions of musicians to subscribe to. As I noted above, Facebook already has a Music feed, but its bookmark is buried deep in the Apps section of the homepage sidebar. Facebook is known to have hired contractors to build designs of the music feed for web and mobile, and now it looks like the revamped version will launch.

Other potential feeds that could launch include Links or “news,” Videos, and Apps, but sources were unable to confirm these.

Lastly, Facebook will also start displaying image and link posts in a larger format, whether they’re from users or Pages or are ads. This will be especially helpful for the Photos feed, as it means even when not browsed full-screen it will have a rich feel. Ads will become more vivid and noticeable, too. The format change should coax more marketing spend out of luxury brands that are accustomed to larger, glossy-style ads.

Overall, the launch event should be a big win for both Facebook and its users. We’ll have more control over what content we see and gain new ways to interact with what our friends share. Discovery of specific types of media will improve, and time on site is likely to increase. Advertisers and investors will likely rejoice. How Facebook will roll out the changes isn’t yet clear, but I’d suspect a somewhat staggered launch to prevent shock and the typical “new-is-bad” chatter from snowballing in the feed.

After spending years focusing on its app platform, the profile, and search, Facebook’s crown jewel will finally get some polish. Nothing connects us like the news feed. It delivers the feel of a small town square to a global network. It’s given us ambient intimacy, and it’s about to bring us even closer.

[Update 3/7/2013: Facebook just held its press event and my sources were right. It launched content-specific feeds for Photos, Music, and more, plus increased the size of photos and ads. Read all about it here and check out our hands-on video.]