At the Launch Conference in San Francisco today, Twitter co-founder Ev Williams took the stage to talk to conference founder Jason Calacanis about everything from his experience at Twitter and the rise of Vine to sharing his take on Google and Facebook as well as the latest from Medium, his latest effort to shape the future of digital publishing.

Williams, a serial entrepreneur, has played a key role in helping to shape the way we create and share content on the web, as the co-founder of Pyra Labs, which produced Blogger — and was bought by Google in 2003. In doing so, Williams is often credited with coining the term “blogger” and helping to popularize both the term “blog” and the medium itself. After leaving Google, Williams went on to co-found Odeo and “idea incubator” Obvious, which produced both Twitter and, most recently, Medium (among others).

Through his experience at Obvious, Williams said that he learned two important things about himself. After departing from Twitter, he, Biz Stone and other early Twitter employees revived Obvious, but thereafter he found himself “stuck in a rut,” he told Calacanis. In helping to incubate (and finance) startups like Medium, Branch and Lift, he came to realize that he wanted to focus on building a company and a product — not simply to play the role of investor and advisor.

Seeing a market opportunity, a problem that “mattered” and leveraging his experience at Twitter and Blogger, he took a more active role at Medium, because “having an impact is at the top of my list of criteria” when deciding where and how to invest his time, he said. There was also the fact that Medium is a publishing tool, allowing people to create collections of content around a particular theme and/or subject, while inviting others to add their own contributions to those collections, as Drew wrote in November.

The startup focuses on ideas and concepts he had while at Blogger all the way back in 2000, features that he’d even built for the platform but never got around to implementing, he said. The idea with Medium, and what captured his attention — a problem that he says he feels like he has to solve, an idea most entrepreneurs are familiar with — was the opportunity to create a better Twitter for long-form content, a space that’s currently owned by Tumblr.

In a sense, he says, it’s along the same lines as what Twitter has been able to do with Vine, its popular video sharing app (where Williams sits on the board). It’s “still early, and I can’t take any credit for it, but I like it because it captures the essence of Twitter, for video … it’s becoming one of the first platforms to not just duplicate what came before it — the process for every new medium or platform — but create an experience, feel and interface that is unique to the format.

All of his ventures are either directly or indirectly attempting to address the long-standing problems that still exist in online media today, the Twitter co-founder says, particularly in the fact that, as the Web has succeeded in lowering the cost of content distribution, it’s created a flood of new content and information. The new economic model around publishing today incentivizes and rewards frequency, volume and keeping costs low when it comes to content creation, which, in turn, disincentivizes investment in a particular piece of content — and long-form content. It prioritizes lower quality content and burying higher quality content.

While Twitter and Blogger have both played a role in creating and instituting this new model, the first generation of digital publishing has focused on metrics like unique visitors and page views, which, while it’s a good start, he says, the way we measure the engagement around and value of content needs to evolve.

Medium, Williams says, is focused on understanding whether or not people have read the content, whether they read all the way to the end, whether they engaged, shared and commented — whether they actually got something from that content. “We’ve done speed and quick release in publishing, now let’s focus on the other things,” he told the crowd.

When asked how Medium involves and what his product development process is like, Williams said that, for him, “usage is like oxygen for ideas,” and that he tries to focus on what people are doing on the platform, how they’re interacting with it — not doing data analysis or stressing over user feedback. That way, he says, you are able to get a more organic understanding of what’s important (and of what users care about) in realtime, as the product moves forward. Then you can nudge development in that direction. 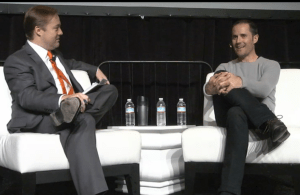 As it relates to Medium, Williams said that he wants to create a platform that can give context to the content that people create, eventually leading to a system where the whole becomes more than the sum of its parts. The idea is to allow people to build a cohort of like-minded ideas and, to measure the value of its content, Medium is recording a rough heuristic for “reads,” Williams said in an attempt to discover whether or not people are reading the content, did they stick with it and get all the way through the post, etc.

That being said, Williams continued, he realizes that there’s more friction for Medium as a publishing tool than there is for, say, Twitter. “It’s not like a tweet, it’s not as easy, and we don’t expect the ratio of creators to consumers to be the same for Twitter and Instagram, for example; the point, instead, is not to lower the barrier to get everyone creating, but to get the maximum audience for the really good stuff.”

It would be great to get back to a system in which accuracy matters, and maybe it’s naive to think that quality can (and will) get more attention, he says, but it’s possible to use the network and great design to build a system that creates a better product — and thus creates more attention. “Most of the web is ugly, and the system is broken, it’s terrible for consumption,” he says. “By giving quality more attention and by creating a better system to create better content, we can solve that problem.” And, naturally, better design is part of that.

While the economics of journalism “is a very tough problem,” Williams says, building an economic model that supports journalism “is a worthy goal” and something Medium is
“definitely going to experiment with,” he concluded. The economics are different building a content platform than it is for a publication, any time you build a content platform, you will have commercial usage, and if it’s sizable than there’s money to be made, which is different than the problem The New York Times faces, for example. The idea is to create a bunch of people who are motivated to create content not because they’re getting paid, but because they want to create.

When asked what advice he would give to aspiring entrepreneurs, Williams said that they should focus on building something that they want to exist in the world and to “focus on it entirely.” Something good will come out of it. Of course, as we get older, he continued, that focus becomes much more difficult to maintain, because there are more opportunities — and distractions. “The only way I can manage that is if I say ‘no’ tons of times every single day.” The only way you can really do your best work, he says, if you learn how to say “no,” something that’s easier said than done.

Calacanis also asked Williams what his impressions were of the biggest Silicon Valley tech companies, like Google, Apple and Facebook. Of Google, Williams said that he’s “still a huge fan” and that most people who have worked their maintain a soft spot for the company. “Their values are real,” he continued, “and I love that Larry [Page] is making big bets. I think they’re going to continue to take over the world.”

As to Apple, Williams said that he, strangely enough, doesn’t know the company very well. “It’s funny that Apple is in Silicon Valley, employs tens of thousands of people, yet I don’t seem to know any of them. That’s strange to me.” The big issue for both Google and Apple is that it’s really hard for a company to create real value and be successful in different markets. The thinking is, he says, that Apple has all these smart people, it has all the money, so they should rule the next big thing. But, generally speaking, that’s not the way it happens.

At Google, Williams said, he realized why these big companies — in spite of all their success, all the buzz and giant market caps — create a landscape in which there will always be opportunities for entrepreneurs. In any field a founder chooses, traditionally the conversation has always been one in which VCs will ask, “but what if Google got into this? What would happen to your company then?” While the Google “danger” has always loomed for entrepreneurs, when he got to Google, he realized that it’s hard to innovate and build internally. In fact, most of Google’s most popular products (like YouTube, Android and Maps) were a result of acquisitions.

I realized there’s plenty of room for startups, not because of inefficiency or incompetence at these companies, but they’re just not focused on creating the best value for nimble companies, flexibility and innovation. So that’s the best part of this system, all of these companies eventually fall, or mature, or slow down, he says, and that means that we get to create new things.

You can watch the whole interview here.