Once rejected by Kickstarter, the smartphone-controlled door lock Lockitron was a crowdfunding hit on its own site. Still, for the foreseeable future, most locks will be opened with the insertion and turning of those sculpted metal strips known as keys. Their manual mechanics are an anathema to today’s early adopter. Worse, they jangle around in your pocket, ready to unleash their inner Inigo Montoya on whatever naked, valuable glass-clad object that dares invade their domain. Recently, though, a trio of crowdfunded projects sought to establish study enclosures to organize and keep those rustling rapscallions literally in line. 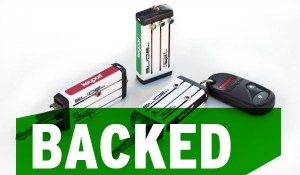 Backed: KeyPort Slide 2.0 Seeking no less ambitious a goal than reinventing the keychain, the KeyPort Slide 2.0 is, as its numerical suffix denotes, the second-generation of an early attempt to keep keys in line. Like the original, it does this by keeping them fully enclosed. Also true to its name, the Slide allows you to extend the business end of your keys out from the enclosure to do its unlocking, after which it is retracted back into the KeyPort. And the whole package can fit into that otherwise useless front mini pocket in your jeans that the iPod nano once claimed.

The slick functionality comes at a price, though. In order to work with the KeyPort, the fat part of the key normally used for gripping are replaced with tiny blades that allow insertion into the device. This requires a trip to your local key duplicator in the best of circumstances. The KeyPort Slide comes in three colors and, if you’re something less than the master of unlocking, you can include such goodies as a flash drive, LED flashlight, bottle opener and barcode holder. Over 1,600 backers have slid more than $110,000 toward the KeyPort, pushing it past its $75,000 goal. The KeyPort Slide 2.0 is expected to ship in May. 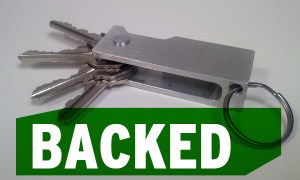 Backed: KeyFlip. If you’re feeling a bit freer with your keys or are averse to chopping off their heads, you may be more interested in the KeyFlip. Similar to the hinge on a Swiss Army Knife that keeps blades neatly tucked away, the KeyFlip enables keys to fan out. Fine, you say, but does it include an integrated bottle opener so I don’t need to get an iPhone case that includes one? You know it does. But the bite-size video raises some concerns. It appears that there may be difficulty in isolating the key you need. This is a particular concern for less-used keys since, unlike with the KeyPort, there’s no handy color coding for association. Over 800 backers didn’t give a flip as the KeyFlip, due to ensconce backers’ keys this month, collected nearly $32,000 beyond the $2,200 sought. 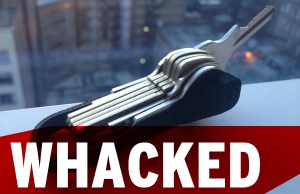 Whacked: BladeKey Pocket Key Organizer and DIY Pocket Tool. The BladeKey is the patented cousin of the KeyFlip, keeping unmodified keys close to each other. However, it’s a racier relative, showing off enough of the keys’ form to be banned at the Grammy’s per CBS’
Standards and Practices department. The company, which had been selling plastic versions of the vaguely elongated earmuff-shaped devices, hoped to step up to aluminum.

The move up to the classier material, though, seemed to contrast with its reliance on zip ties, which the campaign page devotes six bullet points to defending. Did you know that zip ties are easier to remove and insert than pop rivets? You’re welcome. Available in sizes to accommodate three, six or nine keys, the zip-tie-embracing aluminum BladeKey was to ship in March, but the Indiegogo campaign ended with only $1,656 collected of its $15,000 goal.