Editor’s note: Derek Andersen is the founder of Startup Grind, a 35-city event series hosted in 15-countries that educates, inspires, and connects entrepreneurs. He also founded Commonred and is ex-Electronic Arts.

I met Ryan Smith about nine years ago in a college apartment in Provo Utah. We were both attending school, and after asking him what he was working on he replied, “I’m building an online research company with my dad called Qualtrics.” Nine years later Qualtrics has 5,000 customers, $70MM in funding, and turned down a $500MM acquisition offer last year in a bold attempt to build a billion dollar company.

Qualtrics was well described last year when Sequoia Capital partner Bryan Schreier called them the “largest software company you haven’t heard of yet.” That is changing quickly. If you don’t know, Qualtrics was created by Ryan and has dad as a way to help schools and companies gather feedback and data on students/customers through surveys. They have 5,000 customers including FedEx, Hewlett-Packard, JetBlue, Microsoft, PepsiCo and Zappos. I recently interviewed Ryan at Startup Grind Utah and learned how it all happened.

In the summer of 2001 while doing an internship at Hewlett-Packard, Ryan’s dad Scott called him and said he had throat cancer and would begin treatment immediately  so Ryan returned home and took a semester off school. While at home he found that his dad, who Ryan describes as a “super early adaptor,” had built the technology that was the beginning of Qualtrics. Each day after Scott returned from chemotherapy they would work on the product. By the time Scott had returned to full strength, Ryan had signed up 20 customers and they had hired a small team to build out the product.

The first customers were in academia. Ryan realized that he could easily find key decision makers’ contact information online, and since it worked for one it seemed only natural that it would work for others.  The first customer was a professor at the Kellogg School of Management. Ten years later the first 10 Qualtrics customers are still customers.

All of this was literally happening from Ryan’s parents’ basement in Provo Utah in 2002 and 2003. Ryan’s first big hire was a friend that he convinced to turn down a $60,000 job to make $8,000 at Qualtrics. Don’t worry – after over delivering he made $12,000 the next year. By 2004 they had 20-people and there were so many cars on their street that neighbors complained and the garbage trucks couldn’t pick up the trash. Eventually they were making $100,000 a month. Five years after inception and making more than a million dollars.

The product and company stayed focused on the original vision and customers. Ryan would call his brother Jared at Google to talk about ideas and possible directions and Jared would hammer home focus. “Don’t talk to me about anything other than 250 school.” They stayed focused and eventually did get to 250 schools, using the product usage volume and virality to double as the marketing plan. The first press they ever did was a story just 9-months ago after their funding was announced. They’ve turned down Inc. Magazine’s fastest growing companies list for six years in a row. “What’s wrong with making money quietly? Actually there’s a lot of upside to it.”

With the team and business growing, Ryan had maxed out in his technical capacity to manage and build the engineering team. “I thought to myself, ‘Who is the best engineer that I know?'” There are few in the world better than his brother Jared who built a 180 person engineering & product management team at Google and had worked there since 2004. Jared Smith is one of these elite Valley tested engineers that every founder dreams about joining their startup but deep down knows there’s only a 1% chance he/she ever actually will. In Ryan’s case it actually did and the effect was dramatic. Ryan estimates Jared’s engineering impact on the same team was a 7X increase in productivity. Meanwhile customers and revenue continued to march ahead.

The first VC calls started coming on strong in 2008. The team would politely decline and grind ahead. By 2010 they had 100 employees and were receiving three investment inquiries per day. I’ve spoken with a half dozen VCs whose offers were flat out turned down by Qualtrics. I get the impression that many had never experienced anything quite like it.

Finally in May of last year it was announced that Accel Partners, who had been reaching out for three years without giving up, and Sequoia Capital were investing $70MM into a company that had never raise $1. So why even raise money? “One plus one has to equal five. If one plus one doesn’t equal five this deal doesn’t work. It has to be so compelling to achieve our objectives that we’re all in. We got Sequoia and Accel and that’s exactly what happened.”

With 300 employees and no basement big enough to hold them, Qualtrics now has a ‘spared no expense’ headquarters in Utah whose culture, perks and creative design would go toe-to-toe with anything you find in Silicon Valley. “The Smith’s have managed to build an organization in Provo that is focused on performance, and a culture of performance driven by complete transparency,” said Patrick Llewellyn, President and CEO of 99designs who recently visited the office.

Ryan is surprisingly level headed about his own future and the company’s. With $70MM in funding, the pressure and expectations couldn’t be higher. “Billion dollar opportunities are rare. What we’re trying to do is very big and I’m working harder now than I ever have.” 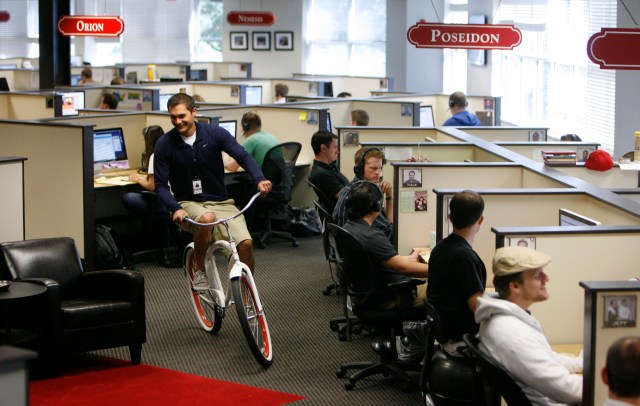