We wander the streets with tiny computers in our pockets and in our hands. We talk casually to these computers, just like Captains Kirk and Picard talked to the computers on their Enterprises. With the push of a button, our computers give us unprecedented access to the bulk of human knowledge. These computers sometimes talk back to us. But underneath all the noise and chatter of speech, the computers in our pockets communicate with one another in an endless stream of ones and zeroes. Packets whiz through the air, unseen, unappreciated.

Those invisible ones and zeroes floating through the air cost real money. Proletarians like you and I enjoy a small allotment of ones and zeroes that we’re allowed to send and receive. The robber barons who mediate our access to the bulk of human knowledge grow rich even as they reduce the quantity of ones and zeroes they permit us to send. The computers in our pockets yearn for more ones and zeroes, but we, like over-protective parents at a pizza party, cautiously step in to prevent a binge.

There are some, though, that seek to make it easier — and more affordable — to send ones and zeroes through the air. Karma offers a lilliputian device with simple, easy-to-understand pricing. There are no onerous contracts. You are not required to commit to exclusivity to Karma for several years, unlike what the robber barons demand of you.

The Karma device creates a WiFi hotspot that moves around with you, and connects your WiFi connected devices to the Internet. This is just like the tethering option available on your pocket computer; but Karma sends data through Clearwire’s cellular network. Use it at airports and hotels to avoid exorbitant access fees. Use it with your WiFi-only tablet while you’re riding a bus or a train.

The nifty thing about Karma is the notion of “social bandwidth”. It seems a little extravagant to have a device dedicated to getting your little tablet onto the Internet. The same access point could easily service multiple devices. And that’s just what Karma does: it creates a public WiFi hotspot, with your name right there in the SSID: “Scott’s Karma”. Complete strangers can connect to your hotspot, and the Karma service handles all the account creation and billing nonsense. You just say to the world “Hey, here’s a WiFi hotspot you can use” and you’re done.

When someone new starts using your Karma hotspot, they get 100 MB of free bandwidth to consume; no need to pay anything at all. You also get a bonus 100MB for sharing your connection. Early adopters of Karma can probably accumulate a substantial pool of megabytes to use. After your freeloading guests consume their 100MB, they can purchase additional megabytes at reasonable prices. There’s no need to for these folks to own their own karma device: they can just keep using whatever Karma hotspots may be nearby.

Users of Karma get a dashboard display from which they can review their data consumption, see who has connected to their hotspots lately, and buy additional data as needed. It’s all very easy to use.

The other strike against Karma is one of simple security consciousness. I think most people are aware of the dangers of connecting to unknown and untrusted wireless networks. Right now, Karma is brand new — it’s not a household name — so when someone sees “Scott’s Karma” in the list of nearby wireless networks, there’s nothing to really encourage them to connect to it. If Karma devices can proliferate, maybe this situation will change.

In the high-tech metropolis of Columbus, Ohio, the Karma device worked just fine, as long as I was outside. Standing at a bus stop on my morning commute, my transfer speeds were just fine. The device reported a 4G connection, and I certainly had 4G-ish speeds. 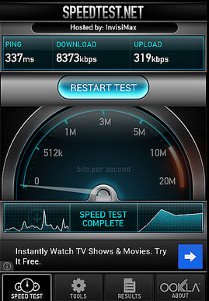 As soon as I walked into a building, though, the connection would immediately drop to 3G, if it remained connected at all. In most buildings, the connection light blinked on and off, forlornly looking for a signal. This may be due to the quality of the Clearwire network in Columbus. Or maybe all the lead paint blocked the signal. I don’t know.

Sitting in a coffee shop, I connected all of my devices to the Karma network at the same time: Samsung Galaxy S3, Nexus 7, and laptop. Running a speedtest on all three simultaneously produced very disappointing results: 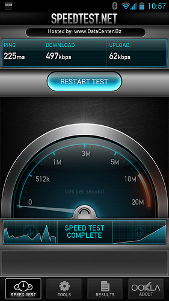 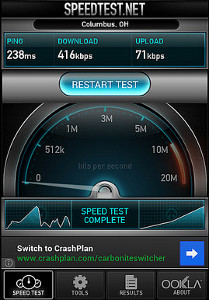 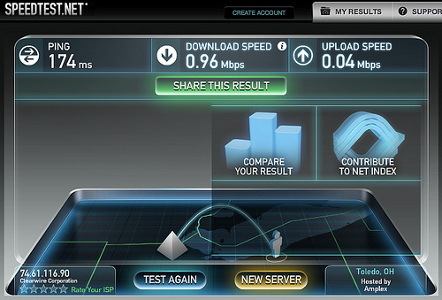 During my tests, only one other person ever connected to “Scott’s Karma”, and that’s only because I asked my wife very nicely if she’d do so. No strangers connected, so I honestly can’t say how the device will operate in its intended use case.

In all other respects, the Karma was an absolute delight to use. It’s small enough to carry in your shirt pocket. I never completely depleted the battery, even after several continuous hours of use. The signal was strong enough for all the tasks I needed to perform while out and about. A little more than a week’s worth of daily commutes consumed only a couple hundred megs of data. I checked email with wild abandon, trounced friends in Words With Friends, and destroyed an impressive number of Resistance portals while playing Ingress.

If nothing else, Karma provides an inexpensive option for getting WiFi-only devices online in the absence of freely available WiFi. Quit paying the robber barons excessive fees for the privilege of tethering devices to your pocket computer. Bypass the hotel’s rip-off WiFi. Be a nice person and help others avoid rip-off WiFi.

update: I confused the device name with the domain name. The former is just Karma, while the latter is yourkarma.com. My apologies for any confusion.