Facebook has just issued invitations to press, which promise a new look for News Feed, to be held March 7 at 10 AM PT. The announcement comes on the heels of news from January that Facebook was prepping a radical new look for its mobile news feed, according to a redesign witnessed by our own Josh Constine recently.

In January, Josh wrote about an employee-only redesign he’d seen on an iOS test build that evolved the look of the mobile news feed, including full-screen photo tiles and text overlaid on images. The new look is more in keeping with info streams in other mobile apps, Josh reported, like Google+ and Flipboard.

Facebook’s recent mobile focus has been on improving the backend aspects of its apps for iPhone and Android, and on adding features like free VoIP calling for users in the U.S. and Canada. Now that the underlying tech behind the apps have been greatly improved, bringing benefits for loading and launch times, as well as general performance, it makes sense that the company would turn its attentions to improving the Facebook app’s aesthetic elements.

The last time the Facebook mobile app got a significant visual upgrade was in May of 2012, when the company updated the news feed with a much more media-focused look. According to what Josh saw in January, the new design takes that even further. Below, you can see a mock-up of what we could be in for, albeit with much more spit and polish. 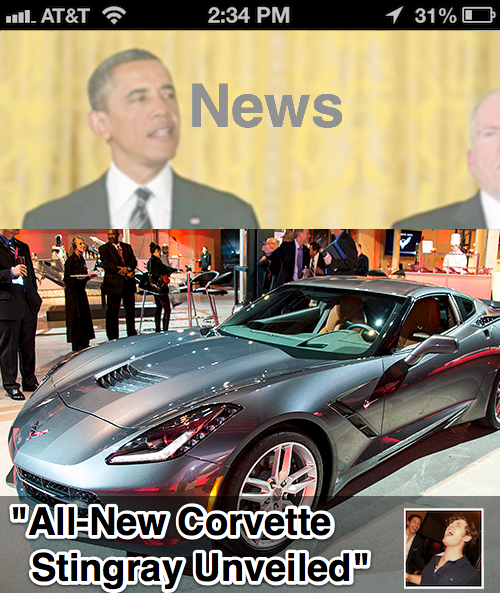 Another recent report suggests some changes to the way Facebook displays information are on the way. ReadWrite said yesterday that Facebook is testing a Timeline redesign, which is rolling out to New Zealand users first. The changes are described as “subtle,” but we could also see this shift detailed at an FB event, if there’s enough of a difference to merit a public explanation for FB users.