Mobile video startup Viddy* is launching a new iOS app, which it hopes will help users create and discover more interesting videos. To do so, it’s doubling the length that videos can be, and giving users more tools to spruce them up. It’s also providing users with more tools to find relevant videos based on their interests and location.

The new version of Viddy’s iPhone and iPad app has a number of enhancements designed to help users improve the videos that they produce. For one thing, it’s extended video length from 15 seconds to 30 seconds, giving more time for creators to actually, um, do stuff. 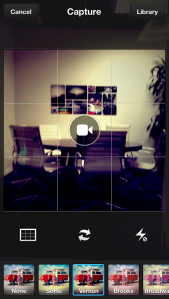 The startup has also added the Vine-like ability to stitch together multiple clips as part of a video project. “A big part of movie creation and storytelling is motion within a video,” Viddy president J.J. Aguhob told me. “Instead of a flat linear clip, there’s the ability to stitch together the passage of time… It allows people to be creative and tell a better story through video.”

In addition, the app has added 15 new video filters and eight new licensed audio tracks to choose from. And it has a mock stop-motion functionality, allowing users to adjust the frame rate to make freaky GIF-like videos.

While helping its users make better videos, it also wants to help them discover better videos. Or at least videos that are more relevant to them. That includes suggesting videos based on their interests and affinities, as well as those which were shot nearby. It’s also overhauled its Explore section, with curated and trending videos, and added better ability to search hashtags and @ mentions.

The update comes in the wake of a re-org, as Viddy is putting more emphasis on product and community. The company previously bet on celebrities to help bring in users, giving up some equity in exchange for getting them on the platform. But Justin Bieber’s naked chest might not have helped boost its user numbers as much as it hoped, and the company seems to be taking a step back from its celeb focus.

In fact, Aguhob told me that only 15 percent of video views come from verified brands and celebs like, say, Justin Bieber. The other 85 percent of views come from the broader community. So it’s probably no big surprise that earlier this week, the company laid off more than a third of its staff, with cuts coming mostly out of its marketing and operations department. While engineering continues to crank out updates, the whole celeb-biz dev thing seems to be kaput.

Viddy isn’t the only social mobile video app going through an upgrade — rival Socialcam is releasing version 5 of its app, improving video quality on its iPhone app to 720p and enabling users to take advantage of video HDR capabilities.