Sony today announced a new entry-priced DSLT (Digital Single Lens Translucent) camera, the a58, priced at $600 bundled with a newly designed 18-55mm zoom kit lens, and coming to retail in April this year. The a58 pushes the needle forward for Sony’s DSLR-style interchangeable lens line, with a nice hop-on point for the company’s Translucent Mirror tech for consumers looking to get into more pro-style gear.

The 20.1 megapixel camera succeeds the widely respected Sony a57, which also used SLT to help it deliver fast burst mode photography with continuous focus lock. The a58 has a few new tricks up its sleeve, including a new sensor and new BIONZ processor, which allows it to selectively dial down digital image noise and sharpness in different parts of the same photograph, meaning it can preserve detail in lighted areas and make blacks much blacker in others, which should be particularly useful for nighttime photography.

There’s also a brand new OLED electronic viewfinder on board, which improves on the version in the original with improved color rendering and 100 percent field of view. But the biggest trick up the a58’s sleeve is the introduction of autofocus lock-on tech not only for human subjects, but also for objects. The Auto Object Framing tech is the next generation of Sony’s Auto Portrait Framing feature, and allows the camera to pick out people, moving objects or macro subjects and track those, keeping them in focus and also framing and cropping them for  alternate, re-composed shots alongside the originals. 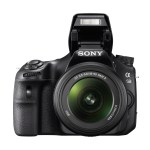 The a58 uses Sony’s A-mount system lenses, and the company is also introducing new versions of those today. Three new A-mount lenses make their debut alongside the new body, including the DT 18-55mm F3.5-5.6 SAM II lens which is the new kit lens for the entry-level DSLT. It has the same AF motor as the previous generation, but should have quieter focusing performance, good for shooting video. The new design should also reduce flare and ghosting, Sony says. It will arrive in May for $220 as a standalone lens.

Also new to the line are the Carl Zeis Planar T* 50mm F1.4 ZA SSM lens, giving pros a nice, fast portrait and all-around lens designed for use with full-frame sensors, with dust and moisture resistance. This one arrives in May and will cost around $1500 when it does. Finally, Sony is also adding a new big pricey zoom, the 70-400mm F4-5.6 G SSM II telephoto, which has improved AF responsiveness and is designed to be used to track and capture fast-moving subjects for HD video. It’ll be $2200 or thereabouts when it arrives in July.

Sony’s camera division is doing very interesting things lately, and the a58 looks to be a nice improvement on the a57 and a near-perfect entry-point for consumers looking to step up to a DSLR-category device, but who are also looking for a host of features that should make handling the more powerful gear easier. With all the new bells and whistles, buyers should be able to get great pics out of the a58 without much of a learning curve.