Editor’s note: Bismarck Lepe is co-founder and president of products at Ooyala. Follow him on Twitter @bismarcklepe.

Mobile World Congress kicks off next week, and business and technology leaders from around the world will converge in Barcelona to see what’s next in mobile tech. But one thing you won’t find amid the keynotes, networking gardens, and after parties is a frank discussion about why mobile video continues to be a huge pain for viewers and broadcasters alike.

For many, the mobile video landscape is too fragmented and frustrating. The result is that people are missing tremendous opportunities to make money.

Let’s look at the data: new research from Cisco reveals that, for the first time, video accounted for more than half of all mobile traffic in 2012. They also report that “two-thirds of the world’s mobile data traffic will be video by 2017.”

So why, then, is mobile video still an unsolved problem? The short answer is Android. The longer answer is that a number of power players refuse to work together and adopt universal standards for mobile video and instead battle for digital turf, confusing the rest of us in the process. 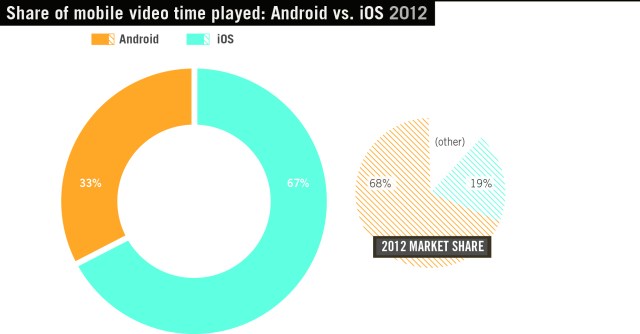 iOS and Android made up 91 percent of the smartphones shipped in Q4, 2012, according to IDC. While Apple got an early lead in the phone wars, Android shipped more than three times as many handsets last quarter.

But the problem goes deeper than mobile operating systems.

While most modern mobile devices support basic capabilities like H.264 decoding and progressive download and playback of MP4 files, more advanced functionalities like adaptive bitrate and live streaming, which are both fundamental to an enjoyable experience, vary greatly from one handset to another.

iOS devices have supported advanced use cases, including ABR and HTTP Live Streaming (HLS) since 2009. Apple has continued to push the mobile video envelope and now enables state-of-the-art features such as mid-roll ad insertion. Android, on the other hand, remains a very fragmented platform. When it comes to video, the Android ecosystem can best be described as a work in progress.

Why is that the case? Fragmentation is by and large the biggest issue. Multiple hardware companies manufacture Android phones and tablets, and no two are the same under the hood. Android has also cycled through various video delivery protocols with each new dessert-themed iteration (what are they on now? Jelly Donut?).

Initially, Android supported RTSP as a streaming protocol, but the quality varied greatly. HLS support was first introduced in Android 3.0 (Honeycomb) but had a very limited implementation.

Now, almost two years later, Android 4.2 still has very limited support for HLS. For example, Chrome, Android’s default browser, does not currently support HLS. In the past, it was possible to work around this shortcoming through the use of Flash. But since that support has gone away (thanks, Android 4.1!), it has left a big hole in Android’s video playback capabilities, and made the entire mobile video delivery picture more complicated.
So how can media companies, broadcasters and brands maximize the opportunity to connect with audiences through video on mobile screens? Simple: consolidation and unification of mobile video standards. There are currently a few initiatives in the industry that may simplify mobile video in the future.MPEG-DASH is promising, as a single standard that could resolve the fragmentation in streaming protocols. However, it may take some time before MPEG-DASH is supported consistently across the entire ecosystem. Also, it’s worth noting here that even when Google adds a feature to Android, it takes a long time for the new version to achieve significant market share because updates are not uniform across all vendors.Today, the de facto standard for live/ABR is HLS, and adoption of HLS across the board will eliminate much of the current mobile video fragmentation. But companies like Google and Microsoft are leery of adopting a standard that, for all intents and purposes, is controlled by Apple. While HLS has been submitted as a draft to a standards body, it hasn’t been ratified as a proper standard. And Google is a prime culprit for the lack of unification.The longer Google and Android handset makers refuse to adopt the HLS standard, the longer mobile video will be a pain in the ass.