Sokikom, a new startup that wants to help K-12 teachers motivate students to learn using games, is announcing today that it has raised $2 million in seed funding, half of which comes in the form of a grant from the Institute of Education Sciences (a research branch within the U.S. Department of Education) and the other half comes in the form of angel funding from former Intel Chairman and CEO Dr. Craig Barrett and Zynga co-founder Steve Schoettler, among others.

Up until now, the startup has flown under the radar, spending part of that time in beta, and its products have been in the hands of teachers for almost a year now, testing and iterating. But Sokikom is now ready to “officially” pull back the curtain on its online learning tool, which uses game mechanics to help teachers motivate their youngest students to improve their math skills and performance within the Common Core.

To do that, Sokikom has created a math program that is built around a “game world,” like those one finds in massively multiplayer online and MMORPG games — contextually, it might help to think of Sokikom like Moshi Monsters and the original version of MinoMonsters, but for math.

Sokikom’s game world is divided into different regions on a map, where each region focuses on a specific math domain. Teachers can give students autonomy or direct students to the particular area they want them to practice. Each domain comes with its own diagnostic assessment, which are a series of questions that start at the most basic level for kindergarten or first graders and progressively become more difficult as the student becomes more proficient. If the system senses that students aren’t understanding a particular topic, it stops the questions and sends students to the appropriate game level to continue practicing.

The idea is to personalize the learning process for students, while making it enjoyable, and, of course, more engaging by putting it into a more familiar interface. “You can have content that is personalized at the perfect level for students,” Sokikom co-founder Snehal Patel says, “but if they aren’t motivated, they aren’t going to care and they’re not going to learn.” So, the team designed the game to be adaptive and self-paced, so that questions gradually get more difficult, while using visual math manipualtives to solve problems and, if they get stuck, allowing them to receive hints or view animated instructional videos specific to the area with which they’re struggling.

For teachers, Sokikom provides realtime mastery reports that show them data on how students are performing compared to their class and grade level, how much time they’re spending answering questions, if they’re able to get the correct answer after making a mistake and where they’re struggling. 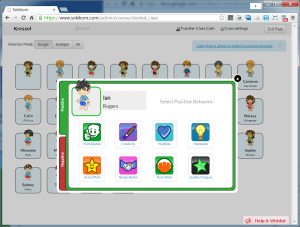 The other cool part about Sokikom, which sets it apart from other cool animated, learning games like MindSnacks is that it’s a MMO, allowing an entire class of students to play the same math game in realtime, where half of the class on the Red Team, and the other is on the Blue Team, for example. The teams can play a game for three minutes, in which the one with the highest cumulative score wins. Patel says that, beyond being fun for students, it actually has utility in terms of improving the learning experience.

MMOs are, by nature, social, so rather than the typical classroom scenario where the more advanced students can actually help other students get up to speed, the idea is to create an experience where students help each other learn math naturally to help lead their teams to victory. In addition, the fact of the matter is that math can be a little dry (sometimes an all out Snooze Fest), and it’s tough to get young students excited about it and motivated to study its core concepts. But Sokikom has found in classroom tests that students care more about how they perform in game settings because they feel that they can be active contributors to the success of the team. That means higher motivation, thanks to serving the bitter Math pill with a more sugary coating.

The other piece of Sokikom’s equation, which teachers (and users) can set up separately from its math program (read: Game world) or use in combination, is its classroom management tool. Tackling the same problem as startups like ClassDojo, Sokikom helps teachers try to get rowdy classrooms under control by, simply put, reinforcing positive, in-class behavior. When students aren’t acting a-fool, the service allows them to earn “class cash” that they can spend on virtual rewards in its game world. 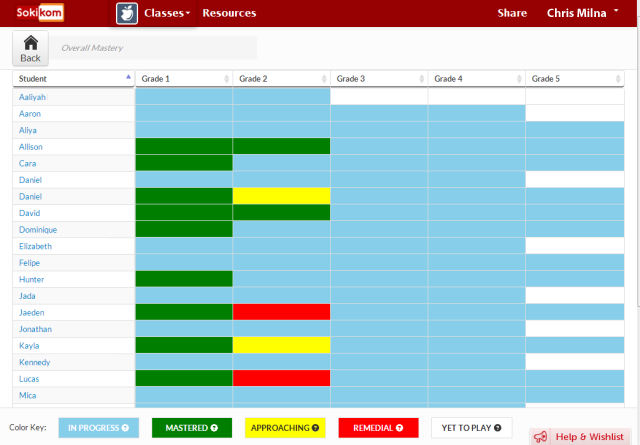 It’s an interesting approach, and one that Patel says teachers are appreciating because it means they don’t have to buy actual prizes for students — and, rather than just accumulating points with no rewards — it works symbiotically with the game world, enabling them to turn good behavior into level-ups and virtual rewards, like personalizing the avatar for their characters. And if Moshi Monsters has taught us anything, it’s that kids love being able to personalize virtual characters and pets — the simple equation that led Moshi Monsters to add 15 million users in four months.

Lastly, teachers get access to automatic behavior tracking in reports, which Sokikom serves in context with its learning report data, which Patel believes adds more value (and less pain) for teachers by serving both in one.

As to why Sokikom decided to focus on math? Well, it’s worth pointing out that Math is recognized as perhaps the worst-performing subject in the U.S. To quote the Final Report of the National Mathematics Advisory Panel:

International and domestic comparisons show that American students have not been succeeding in the mathematical part of their education at anything like a level expected of an international leader … and … the delivery system in mathematics education — the system that translates mathematical knowledge into value and ability for the next generation — is broken and must be fixed.

Houston, we have a Math problem. What’s more Math is a universal language, the rules apply everywhere. And it also helps that Sokikom’s team consists of former math teachers and tutors, so there’s that. But, naturally, the team believes that its models have broad potential applications, so Math is likely just the first step. With any luck, computer science will be next.