Only a month after its expansion into juniors, online and mobile clothing consignment service thredUP is now expanding into women’s apparel. This is the company’s first step out of the kids’ clothes market, representing a shift for the brand which has previously targeted parents — primarily moms.

This morning, the company will announce a Seller’s Private Beta, meaning that it’s opening up to those who want to unload their worn, but not worn-out, clothing by stuffing items into a provided, postage-paid bag which is then shipped back to the company. This is a slightly different type of beta launch than what thredUP did when it opened up to juniors’ clothing in January. At that time, the company allowed anyone to send in teens’ clothes. (That store has not yet launched.)

The company says that it’s going the private beta route for women’s clothing because of the complexity of women’s clothing sizes and the related inventory management hurdles. A limited number of users from those who sign up on the waitlist here will be let in initially. 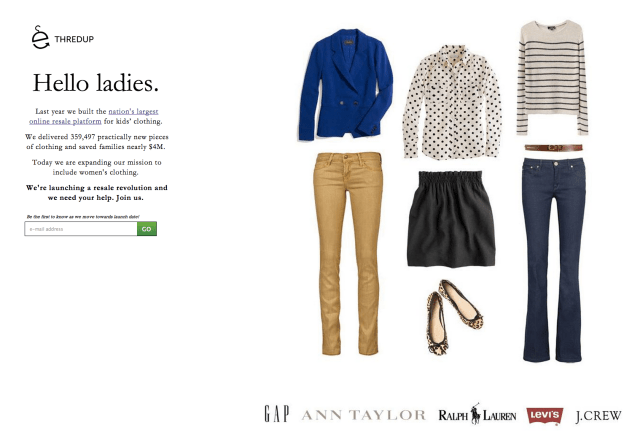 That thredUP was looking to expand to new verticals is not a surprise, however. When the company announced its $14.5 million Series C this past fall, these expansions were top on the startup’s to-do list. Future verticals also include maternity, and then finally, men’s clothes if those earlier plans still hold true.

But critical to thredUP’s success is not just the ability to scale its operations and user base, but also whether it can effectively compete with other companies who have made a name for themselves as a way to buy used clothing online.

It goes without saying that well-established marketplaces like eBay still hold onto a lot of mind share here, but newcomers in the clothing swap/consignment/reselling space are also after those who might have previously dropped clothes off at a local brick-and-mortar establishment, for example, or put clothes in a yard sale, instead of simply donating them.

As thredUP moves beyond its kids’ clothes niche, it will end up competing with startups like the well-heeled Threadflip backed by Andreessen Horowitz, Greylock, First Round, Greylock and others, 99Dresses, newer arrival Twice, plus Poshmark, and several others, including the more locally-focused, or narrowly aimed (e.g. wedding dresses).

And as as you can see below, some of these services already have a bit more traction than the others. 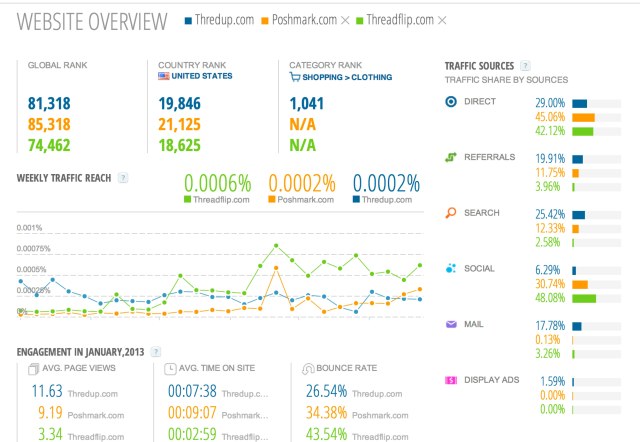 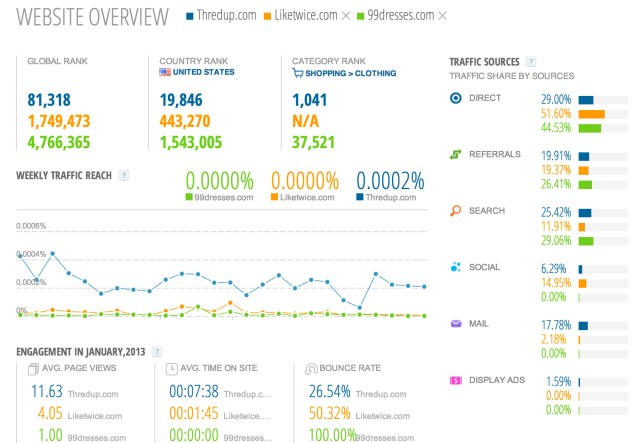 ThredUP says that it’s now adding around 5,000 items per day, and sold over 350,000 items last year. It has grown to over 400,000 registered members. This past month, the site saw 385,000 visits. The company also notes its mobile traction is growing – 25.3 precent of its emails are now being viewed on mobile devices, and a good number of users are interacting with the site via the mobile web and app. Though thredUP won’t provide hard metrics like sales figures or revenue, it did say that month-over-month order growth is at 51 percent on average, since last February.

The benefits of using a service like thredUP is its convenience factor – you don’t have to photograph, post, market, package or ship your items for sale. But you also give up control over the selling process entirely. You might not get what you think the items are worth. You might even feel ripped off when your perfectly good stuff is rejected (or so you think). ThredUP’s quality standards are high, and it’s something of a crapshoot to send clothes there today, because if the company declines to list the item for whatever reason, you can’t get it back. (thredUP says it will test a fee-based return service this year, however.) But if you’re considering just getting rid of clothes using the path of least resistance – and hey, if you make a little money, that’s great – then it’s a viable alternative to the more social and hands-on marketplaces like those listed above.

That being said, ThredUP’s earlier approach may have less appeal in the adult used-clothing market. With kids’ clothes, moms and dads often just need to quickly make room in the closet as their little ones outgrow old clothes, and it’s frankly a joy to find anyone, anywhere who is willing to take giant garbage bags of these things off your hands. But with adult clothing, the market is going to be more tricky. And picky. And cautious.

Now the company will be more closely examined by its users, who will want to know if they get their money’s worth by sending their items in, or if it really would have been a better option to take the time to sell on eBay or elsewhere.