Apple’s iPhone 5 became the best selling smartphone globally in Q4, pushing past Samsung’s flagship Galaxy SIII, according to research by Strategy Analytics. The data comes from its Handset Country Share Tracker service. It’s the first time the iPhone 5 sales have topped Galaxy SIII shipments. According to the analyst, a “rich touchscreen, extensive distribution and generous operator subsidies have propelled the iPhone 5 to the top spot”.

Strategy Analytics estimates that 27.4 million iPhone 5 smartphones shipped worldwide during Q4, versus 15.4 million Galaxy SIII units. The iPhone 5’s share of the total global smartphone shipments was 13 per cent in Q4, according to the analyst, while Samsung’s handset captured an estimated seven per cent share.

Neither Apple nor Samsung break out quarterly per handset model device sales — although Samsung does report channel shipments for some smartphone models, and Apple has reported launch weekend sales of new iPhones — so it’s worth stressing that Strategy Analytics figures are estimates.

In addition, comparing the performance of Apple and Samsung’s respective flagships has another drawback. The different launch dates of the respective handsets make a direct sales cycle comparison a little unfair, since Apples iPhone 5 launched last September, positioned to fully capitalise on holiday sales, while Samsung’s Galaxy SIII is considerable older, launching back in May. The hype around its successor, the Galaxy SIV, is already cranking up, potentially dampening sales as consumers may be opting to wait for the next generation device — with a launch rumoured as soon as next month.

That said, Apple’s iPhone 4S launched in October 2011 — yet still managed to out-ship Samsung’s 2012 flagship in Q4. Apple shipped an estimated 17.4 million iPhone 4S handsets — two million more than Samsung’s Galaxy SIII shipments for the quarter — making the 4S the second most popular global smartphone model in Q4, with an eight per cent share (the Galaxy SIII was third). 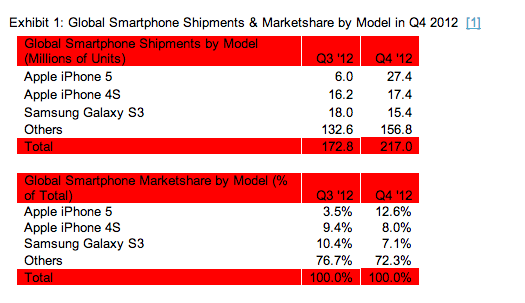 Apple’s iPhone 5 and iPhone 4S together accounted for one in five of all smartphones shipped worldwide in the quarter, according to Strategy Analytics’ data. It described this as “an impressive performance, given the iPhone portfolio’s premium pricing”, adding that the Galaxy SIII’s global popularity “appears to have peaked”.

Apple’s premium pricing strategy is matched by the use of premium materials in the construction of its handsets — with metal and glass the materials of choice for the iPhone 5 and 4S, rather than the plastic used in the Galaxy SIII. Apple is also able to deliver OS updates over the air, bypassing carrier testing requirements, which frequently impede Android updates — meaning some Android fans may choose to opt for a newer model of smartphone in order to get the latest version of the OS.