Higher education in the U.S. is a hot mess. For decades, funding for public universities and colleges has been in steady decline, which, as spending continued, led to rising institutional debt and eventually reductions in faculty, courses, programs — you name it. To make up the difference, institutions have been jacking up tuition rates to the point that the cost of a college degree is now virtually unaffordable. Not surprisingly, national student debt circles $1 trillion like a buzzard, as college graduation and enrollment rates continue to drop. Some have called it a “crisis,” and that would probably be understating it.

Quad Learning launched this week on a mission to help ameliorate some of this pressure by helping to create more affordable pathways for students to a college degree. To do that, the Washington D.C.-based startup is partnering with the nation’s community colleges to help it build and scale “American Honors”, a program designed to help students at two-year institutions prepare for, transfer to (and, most importantly, graduate from) top four-year universities.

By creating working relationships between community colleges and top public and private universities and providing two-year institutions with a variety of student and technology services, the program aims to help students earn a degree at 35 to 45 percent-lower cost than traditional four-year programs. The Community College of Spokane and Ivy Tech Community College of Indiana are the first two campuses to pilot and launch American Honors programs, and, within the next five years, the startup will look to add an additional 30 to 40 institutions.

To fuel its expansion, Quad Learning announced this week that it has raised more than $11 million in seed and series A financing from New Atlantic Ventures, Swan and Legend Fund, NEA, Comcast Ventures and others. With the escalating cost of a college degree, many students are turning to community college as a more affordable way to earn a degree. In 2010/2011, the average tuition for a public two-year college in the U.S. was $2,713, compared to an average in-state tuition of $7,605 at a public four-year university and $27,293 for a four-year private institution. As a result, nearly 45 percent of students who earned a four-year degree in 2010/2011 did so after completing some portion of their degree at a community college.

So, rather than start fresh and create a whole new brand of online higher education, as startups like The Minerva Project have set out to do, Quad Learning wants to work within the more affordable higher education system established by two-year institutions, while optimizing it so that students have a better shot at transferring to a university of their choice.

Community colleges today have students that want to take higher-level, accelerated classes and a faculty that wants to teach them. But, today, there’s no real standardized plan — the quality of courses and curriculum varies widely, so it’s difficult for four-year universities to know just hor rigorous the classes were and how these students compare to other applicants. Generally speaking, community college students don’t always get the benefit of the doubt — two-year institutions still, by and large, suffer from a less-than-positive stigma.

Quad Learning founders Phil Bronner, a former Novak Biddle partner and Chris Romer, a former Colorado state senator, want to help two-year institutions create a same-everywhere standard of selective admissions and a rigorous curriculum that enables those students who qualify to take advantage of an accelerated path and actually have a shot of getting into their four-year college of choice. 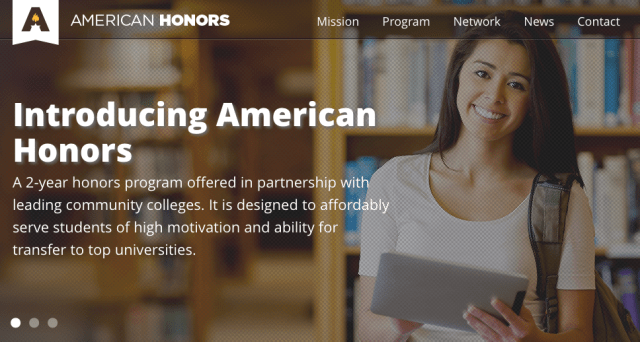 Through its “American Honors” program, Quad Learning gives two-year institutions the ability to ensure personalized advising and support systems for students by offering access to its own roster of advisors, who can help students plan which courses to take, how best go through the transfer process and apply for financial aid, for example. The startup also offers institutions its own learning management systems and tech platform that allows them to more easily develop and deliver virtual classroom environments (and content).

All “American Honors” courses are conducted online, seminar-style and given a user experience and tools they’re already familiar with, Bronner tells us, as students participate in class discussions through an interface that’s much like a Google Hangout. Students can still go on campus for office hours with their professors, to use the library and the gym, but everything else happens online. The honors program will look to target and recruit students who demonstrate high ability and motivation but have been priced out of or overlooked by four-year institutions — and some right out of high school.

Bronner tells us that, while community colleges already have great faculty (contrary to popular belief), budgets and endowments across the country are shrinking as student populations grow. Faculties are dealing with more diverse classrooms, with some students looking for 101-level classes, others who need ESL support, while others want to breeze right into Calculus 2.

By giving community colleges a program by which they can identify and separate more gifted students, Bronner hopes that the “American Honors” program can help faculties teach at levels that are commensurate with their students’ abilities. And while startups like StraighterLine have focused on allowing students to take courses at two-year institutions online, where credit can transfer to a wide set of universities, no one has yet focused on honors students and helping community college students attain degrees from top-tier, four-year institutions.

The American Honors program will charge a premium on top of community college tuition, Bronner says, which will vary by state. Quad Learning will look to establish revenue sharing models with its schools and help students identify and apply for Pell Grants (and other opportunities like it) that will help them cover the extra cost.

“We want to stay well under the average in-state tuition for four-year public universities,” the founder says. “We’re focused on not creating more hassles for students, but easing the load and improving the community college education experience for students from a broad set of socioeconomic backgrounds.”

By enabling students to save money on tuition during the first half of their degree, prepare for the rigor of a four-year program and potentially still graduate from a top university, he continued, we think we can help make higher education more feasible and affordable for all students.”

For more on Quad Learning, find it at home here. More on American Honors here.