LG’s  forthcoming flagship, the 5.5 inch Optimus G Pro, has been confirmed for the U.S. market. Writing in a release on its website (translated from Korean by Google Translate), LG said the device will be  released in international markets including North America and Japan in the second quarter of this year. Pricing has not been confirmed.

Phones that are large enough to act as small tablets — hence the phone+tablet ‘phablet’ portmanteau — were popularised by Samsung’s original Galaxy Note — and now its successor, the Note II. Back in November Samsung announced it had pushed past five million channel sales of the Note II in around two months since the device went on sale. Analyst iSuppli is predicting phones with screens of more than five inches will more than double their share of the smartphone market this year, with 60.4 million units forecast to ship in 2013 as big phones carve out a larger niche for themselves.

On paper, the LG Optimus G Pro is a specs-busting affair — packing in a full 1920 x 1080 HD display, with screen resolution equating to 400ppi. Under the hood the 4G phablet is powered by a quad-core 1.7GHz Qualcomm Snapdragon 600 processor, which LG claims offers improved performance — including lower power consumption — than Qualcomm’s S4 chip. It runs Android 4.1 Jelly Bean, skinned with an updated version of LG’s UI.

On the back there’s a 13 megapixel camera, while the front facing lens is 2.1 megapixels. The removable battery is a whopping 3,140mAh. There’s also NFC on board. Device thickness is 9.4mm.

The forthcoming phablet will make its debut in LG’s domestic market later this month, and will doubtless also be on show at the Mobile World Congress tradeshow next week — so stay tuned for hands-on. 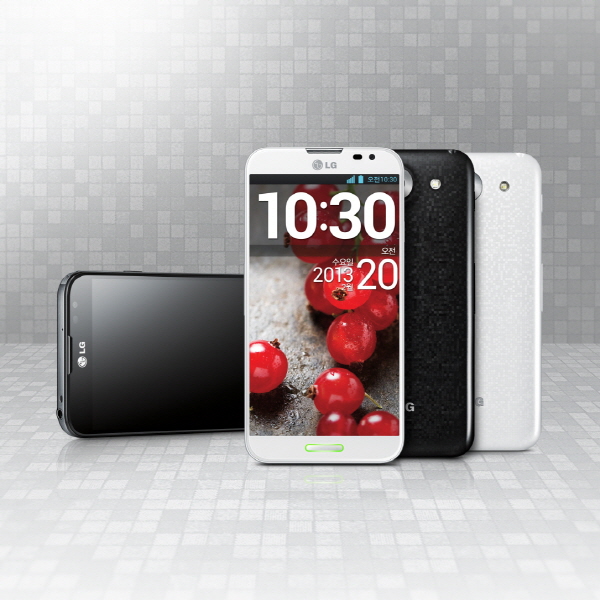