Did you happen to get an email from LinkedIn recently, which congratulated you on having one of the most popular profiles on the site? Then, good news – you’re special. Just like millions of others. The campaign, which ran this month in celebration of LinkedIn’s 200-million-users milestone, involved these ego-boosting emails sent to the network’s “top” users, which urged them to share the good news on Facebook and Twitter. You might be surprised how many took the bait.

For those of you who were sadly not LinkedIn-famous enough (like me, ha) to get on the special list, here’s an example (below) of what the email looked like. 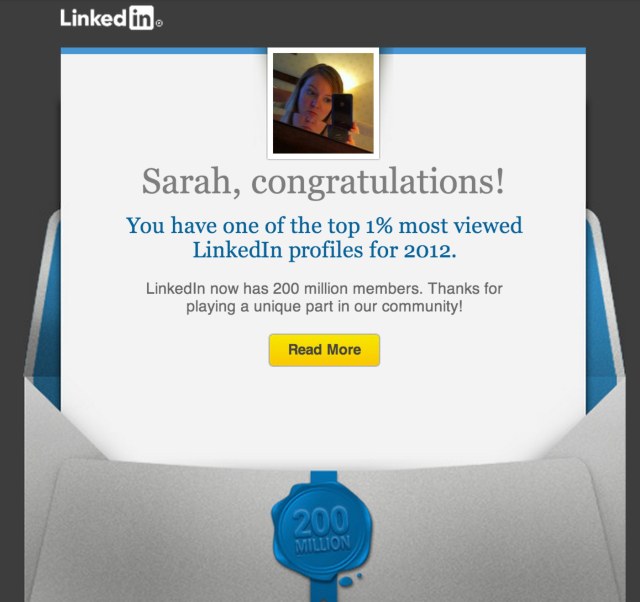 When you clicked through to “Read More,” the resulting web page included a brief message about the network’s milestone and then provided a social sharing box which suggested that “a stat this delightful deserves to be shared.” Users could then post the message to Twitter, Facebook, or, of course LinkedIn. 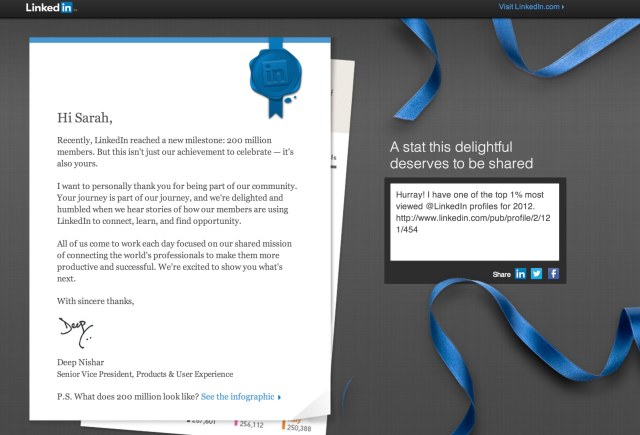 Typically, when companies urge users to post to social networks, it’s to participate in some sort of contest. Pin-to-win. Twitter sweepstakes. Facebook giveaway. Etc, etc. But LinkedIn tried a different tactic to get its message out there – instead of offering some sort of tangible reward, it offered something that perhaps makes even more sense in today’s navel-gazing, selfie-posting, retweet-begging, Klout accumulating, social media era.

I mean really, who can resist posting that they’re in the top 1 percent of LinkedIn users? Even had they paused for a breath – or, I don’t know, actually read the email – they would have realized that they share that accolade with some 2 million others.

After seeing these tweets in my Twitter feeds, lists searches, and even discussed internally among TechCrunch staff, I was curious – did this silly, self-involved email campaign actually work?

And the way it works is not all that different from how spam works, either:

LinkedIn tells us that the contest began on February 7, 2013, and it wrapped up February 14. From the network’s 200 million members, the company looked at those who have active accounts, and were within the first million to register, who have more than 100 profile views (excluding self-profile views), have more than 100 connections, and have the most endorsements for popular skills in their country.

The congratulatory emails were apparently not sent all at the same time, which is good because otherwise, the campaign could have turned ugly. Given the ensuing tweet volume, people might have actually noticed how effectively LinkedIn was “spamming” Twitter.

We asked the company if it would share the results of the campaign, but it declined. Instead, we reached out to the social analytics company Topsy, one of the few that has access to Twitter’s “firehose” API. Using tweets as a gauge of success is a good indicator, because unlike on the more personal network of Facebook, it’s a place where people might be included to do a little bragging.

As it turned out, LinkedIn actually sent out several variations of its email message. It targeted those who are among the top 1 percent, top 5 percent and top 10 percent, Topsy found.

During the month of February up until the end-of-day Friday, there were 82,607 tweets about the campaign. Peak chatter, likely coinciding with the emails, occurred on:

With 200 million users, even emailing the top percentage constitutes a significant outreach effort on LinkedIn’s part. While the number of those who clicked “share” was small in comparison to those who were emailed, it still resulted in a fairly successful Twitter campaign. And LinkedIn never had to promise users anything in return.