There has been a lot of talk in the digital media trade press about native advertising and the opportunities for advertisers. Yet, much less has been written about the opportunities and implications for digital publishers. But, first things first…

What Is “Native Advertising”?

Native advertising is a concept that gained traction in the digital ad industry in 2012. It refers to digital ad formats that integrate more seamlessly (yet transparently) into website aesthetics, user experiences and/or editorial in ways that offer more value to both advertisers and readers. Put simply, native ads follow the format, style and voice of whatever platform they appear on.

Over recent months, the conversation about native advertising has focused largely on the pros and cons of just one facet of the larger movement: publisher-produced sponsored posts on editorial sites. However, native advertising is an umbrella concept that encompasses much more, starting with Google Search Ads and now extending to Promoted Videos on YouTube, Sponsored Stories on Facebook, Promoted Tweets on Twitter, promoted videos on sites like Devour and Viddy, promoted content on apps like Pulse and Flipboard, branded playlists on Spotify, promoted posts on Tumblr, sponsored check-ins on Foursquare, and brand-video content integrations produced by sites like Men’s Journal and Vice.

What ties these seemingly disparate ad products together is one common theme: The ad’s visual design and user experience are native to the site itself, and these native ad placements are filled with quality brand content of the same atomic unit (videos, posts, images) as is natural to that site.

Native ad executions are not new. For decades brands have been integrated in unique ways into media, such as product placements in TV sponsorships or in “Special Advertising Sections” in print magazines. But it’s only recently that digital advertisers and publishers have started to conceive analogous executions on the web.

Benefits Of “Native” To Advertisers

Brand advertisers are expecting to benefit from native advertising in at least two ways:

The result of the above will be higher brand engagement (whether measurable by clicks, engagements, sharing or brand-awareness studies) and brand perception, and, therefore, higher ad effectiveness.

The benefits to publishers are, naturally, the inverse of the above:

Unfortunately, the biggest benefit of native digital ads is also their biggest drawback. That is, to the extent that the best native ads are customized for a given web publication and its audience, they become more difficult to produce and sell at scale. And if a publisher lacks a direct sales team and/or sufficient scale to be interesting to advertisers and agencies, it may have trouble monetizing the ad opportunities most native to its site.

Twitter’s Promoted Tweets and Facebook’s Sponsored Stories are probably the most oft-cited examples of native digital advertising. And, until relatively recently, these large platforms have been the primary beneficiaries of the native movement because they’ve offered the only opportunity for digital media buyers to distribute brand content through native ads at scale.

But what if the Facebook or Twitter ad products aren’t the best strategy for a given marketing execution?  Likewise, how might the more conventional, editorially driven digital publishers capitalize on the desire by advertisers to leverage “native” across the rest of the web?

To answer the questions posed above, it might be helpful to consider the wider native advertising landscape. As previously mentioned, the major web platforms of record have set the tone for native by providing brands the opportunity to run advertisements at scale within users’ news feeds. However, these ad opportunities, as large as they are, are currently both specific and limited to each social network. And while rumors have emerged about a potential Facebook ad network that would distribute Facebook’s ads to the rest of the web, nothing has emerged quite yet. This limitation to a given site or platform represents a “closed” platform model.

So what about marketers who want other opportunities, different audiences or new environments for their videos, posts or other forms of branded content? What options might they have?

Top-tier publishers and platforms, such as Forbes, Flixster, The Atlantic, Devour and Pulse, as well as ad platforms such as Outbrain, Inpowered and Sharethrough, have developed strategies and tools that allow marketers to distribute brand content on publishers across the web. These “open” environments provide both advertisers and publishers with flexibility to “go native” with their media strategies without having to be limited to a single ad execution or platform for promotion. 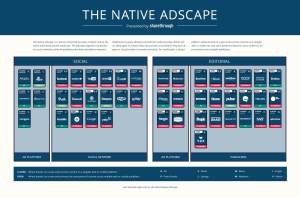 In the “Native Adscape” (left) we attempt to define the leading players in this nascent market in order to shine a floodlight on the exciting and extended world of native advertising — beyond Facebook, Twitter and sponsored posts.

We categorize their distribution models as “social”, “editorial” and “open” or “closed” so as to inform the advertisers and publishers of their opportunities to participate in the native movement. It represents many of the companies that are currently moving the digital advertising industry forward with more effective native ad solutions.