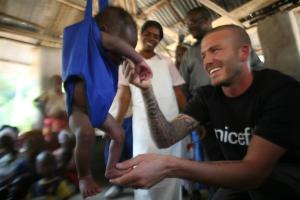 [ALL D.BECKHAM IMAGES ARE RESTRICTED: PLS. REFER ALL MEDIA REQUESTS TO globalcontourclient@gettyimages.com ALL UNICEF USE MUST BE CLEARED BY wendyz@unicef.org.uk or chloee@unicef.org.uk] UNICEF Goodwill Ambassador David Beckham plays with a baby that is being weighed at a UNICEF-supported community health outreach post near the town of Makeni in Northern Province. Nurses at the post monitor children’s growth, administer vaccines and provide education on hygiene and nutrition. Mr. Beckham’s T-shirt bears the UNICEF logo.

From 18 to 20 January 2008, UNICEF Goodwill Ambassador and British football legend David Beckham visited Sierra Leone to call international attention to the issue of child survival. “We can’t turn a blind eye to the tens of thousands of young children who die every day in the developing world, mostly from causes that are preventable,” he said. Mr. Beckham’s visit preceded the 22 January launch of UNICEF’s State of the World’s Children 2008 report. The report details the continuum of maternal, newborn and child care needed to reduce the number of children under-five worldwide who die every year; currently more than 9 million. In Sierra Leone, under-five mortality rates are the highest in the world; some 27 per cent of the country’s children die before reaching their fifth birthday. Sierra Leone also has the world’s highest maternal mortality rate, estimated at 1,300 per 100,000 live births. While in the country, Mr. Beckham travelled to the town of Makeni in Northern Province, where he visited a UNICEF-supported health centre and learned about maternal and child health interventions including malaria prevention, immunization, and growth monitoring. He also visited community projects promoting hygiene and other disease-prevention efforts, as well as a therapeutic feeding centre for severely malnourished children. In Freetown, the capital, he met with children affected by HIV/AIDS. Mr. Beckham also played football with children in Makeni and, in Freetown, spontaneously joined a roadside match with young men.