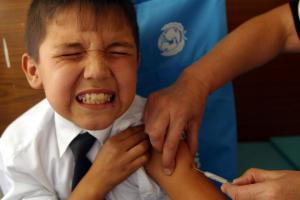 Mehrdod, a 10-year-old boy, winces as he is vaccinated against measles at # 31 Jeleznodojiniy Vokzal primary school in Dushanbe, the capital, part of the national immunization campaign. Cloth bearing the UNICEF logo is behind him.

On 27 September 2004 in Tajikistan, UNICEF joined a coalition of Government, religious leaders, local media, other UN agencies and NGOs to launch the country’s first-ever immunization campaign against measles. The national campaign aims to reach almost 3 million children, some 50 per cent of the total population of the country. Some 6,000 health workers are travelling throughout Tajikistan, including to its most remote mountain passes and valleys to reach children, some of whom have never been vaccinated. Measles is resurgent in the country since the collapse of the former Soviet Union, of which Tajikistan was a part. The campaign is crucial to stemming soaring under-five mortality rates that now stand at 118 per 1,000 live births.