Palantir just scooped up some fresh minds to aid its mission of analyzing the world’s information. Today Y Combinator Summer 2012 startup Voicegem announced its team is joining Palantir, and it will shut down its voice email service in mid-March. Voicegem had delivered over 1 million seconds of voice recordings, but now its makers are moving to a team that’s “truly changing the world.”

Arda Kara and Alexander Blessing came up with the idea for Voicegem while working on computer science master’s degrees at Stanford. They wanted to intimately communicate with their families back in Turkey and Germany, but the time difference made phone calls tough. So they built a simple website and app where you could enter an email address, record a voice message, and have Voicegem send the recipient a link to the web-hosted audio message.

The product got some traction with senior citizens who aren’t as familiar with typing as they are old-fashioned talking. Then Voicegem writes “It became the alternative to a phone call for thousands of people of all ages. Folks ranging from families to language students, aspiring singers to podcasters and universities to businesses.” 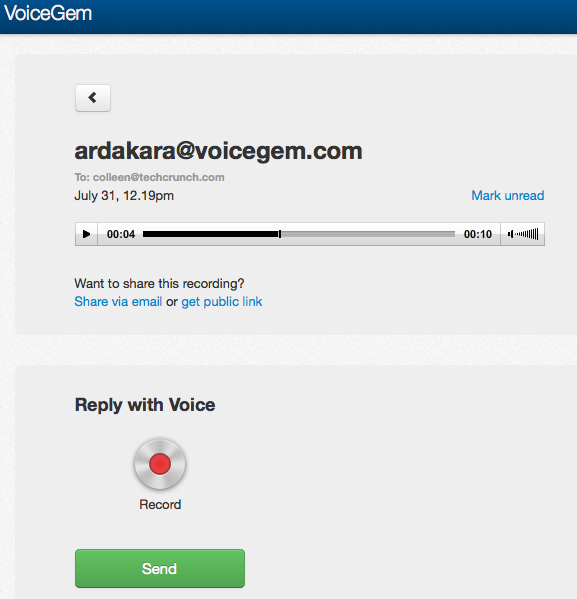 But as Hacker News commenter Aaron Brethorst points out, a million seconds of audio recordings cut up into 30-second voice messages meant Voicegem was averaging only 138 recordings per day over its six-month lifespan. That might not have been promising enough to push forward as a full-fledged business, and Voicegem never announced it had raised any additional funding beyond Y Combinator.

The voice-messaging space has also seen some big new competitors emerge. Facebook recently added voice messaging, and last April Voxer raised a massive $30 million round to back its walkie-talkie app. Also, the macro trend points towards seniors growing more computer literate, so they might have had less need for Voicegem over time.

But that didn’t mean Kara and Blessing’s skills in the voice space should go to waste. Private companies and governments transmit enormous amounts of audio but don’t do much to make sense of it. Palantir’s purpose is to “radically change how groups analyze information,” so it has to know how to crunch voice data. We’re awaiting comment from the Voicegem and Palantir teams, but we bet the startup’s team will be helping Palantir turn audio into insight.

We do know that the Voicegem team will be leaving its Palo Alto headquarters and moving to Palantir’s New York office to join its engineering team. Palantir isn’t picking up Voicegem’s product or data, though, so it’s stopped accepting new users and will shut down entirely on March 15th.

The acqhire is another example of how top-tier accelerators are becoming talent feeders for big tech companies. The exhaustive process of building a startup gives young entrepreneurs valuable skills that are attractive even if their first companies don’t pan out. Eventually, you have to decide if you want to ride out your own focused business idea, or play a small part in something bigger. It seems Voicegem chose impact over control.