I was really hoping this article would have ended differently. But after spending countless hours scanning tiny pixelated squares of people who were supposed to represent my mathematically determined soul mate, I found that online dating websites are modern-day versions of snake oil.

I ended up back at bachelorhood after a long and expensive trek through computer-aided love services; I decided to look for love on the Internet mainly to test the hypothesis behind a blistering 50-page critique of hyped up promise of dating websites. “The heavy emphasis on profile browsing at most dating sites has considerable downsides, and there is little reason to believe that current compatibility algorithms are especially effective,” explained the team behind an article published in Psychological Science in the Public Interest. “You do know that the American public has gotten hoodwinked since there was a product to be sold,” cautioned Professor Thomas Bradbury, in a more strident retelling of his research to LA Weekly.

In essence, the researchers had ripped apart the unscientific claims of dating websites with three compelling arguments 1) no one knows the recipe for love, so a man-made algorithm can’t fare any better 2) scanning profiles leads us to select on superficial traits, and 3) online communicating is a really bad way to start off a love affair.

I hoped they were wrong.

If you think about it, dating sites basically claim to predict the future, arguing that they have a crystal ball with a higher probability of users ending up in romantic utopia. It’s a funny assumption, because even the bleeding edge of social science, which arguably has access to a lot more accurate data than eHarmony, is really quite bad at predicting human behavior.

The normally poor state of social forecasting is compounded by the fact that individuals, in general, are terrible at knowing what they want in a significant other. Per the researchers,”people’s idiosyncratic self-reported preferences for certain characteristics in hypothetical romantic partners appear to be irrelevant to their romantic outcomes with specific potential partners they have actually met in person.”

Another study found that College students who attended a speed dating event 10 days after evaluating potential study buddies online ended up being physically attracted, but not romantically, to the people they met in person who had their ideal traits.

Indeed, middle-aged couples who have strong preferences for particular traits were just as head-over-heels with their long-term partner whether they possessed those characteristics. “As reliable as personality traits have been as predictors of romantic outcomes,” even the best predictor “generally accounts for less than 5% of the variance in relationship satisfaction over time.”

So what does predict success? Love and support through the hard times. Those who can weather a relationship storm–and emerge closer–are the ones that last. Tropical photos and cat preferences can’t tell users who will still love them after they lose their job.

Perhaps the greatest treatise why matching people on similarity doesn’t necessarily work out was put forth by the great 1980’s social philosopher, Paula Abdul, in her critically acclaimed “Opposites Attract”

A Weird Psychological State Of Choosing

After eHarmony and jDate offered me a digital cornucopia of young girls for only around $30 a month, I suddenly became more picky than an Arabian sultan, casually dismissing women for minor imperfections. I became obsessed with how far women were from my idea of perfection, rather than enjoying new personalities. From our friends the researchers, “The browsing process can cause users to objectify potential partners, commoditizing them as options available in a marketplace of profiles.”

Social scientists see this as a perfect case of the ‘paradox of choice,’ when increasing options decreases satisfaction. This is parallel to the classic study of this presented two groups of grocery store shoppers with samples of either 6 or 24 varieties of jam. While both groups tasted the same number, 30% of the 6-variety group purchased jam and only 3% did from the larger variety group. When overwhelmed with choices, sometimes we shut out a decision altogether.

Rather than hop into a date as my usual jovial self, online meetups felt like a job interview. Verbal foreplay quickly gave way to pointed questions about my long-term aspirations and relationship must-haves. Summoning my best graduate school admissions interview skills, I’d rattle off an inflated version of myself, all the while thinking, “She did not look like this in her photo.”

Normally I enjoy dates. There is laughter. There are smiles. While dates certainly are pleasant, I felt like we were stealthy data hunters, diplomatically burrowing for the kinds of information we couldn’t glean from short answer responses.

I started this project back in July and quickly became overwhelmed. Browsing became a chore, and I was forced to find more efficient ways of contacting girls. To minimize waiting for pages to load, I’d open two dozen tabs, quick scan key questions and blast off emails. Canned responses became a necessity; I’d collect various clever responses, which I could copy and paste, depending on how girls responded. Online dating became about answering more and more profiles, thinking that somehow I’d find my special someone by increasing the probability that she was contacted, no matter how shallow the communication.

This is not how we were meant to find love. 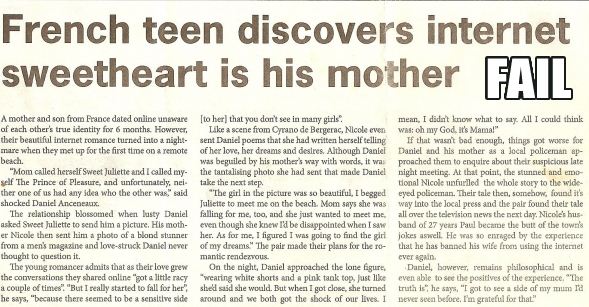 Our ability to unconsciously recognize subtle cues in facial expression and body language evolved over millions of years. To our supremely fine-tuned intuition, crossed arms and a high pitched voice can reveal far more than words. Online communication shuts out arguably the most informative pathway of communication by completely obscuring body and intonation behind a veil of uniform text.

The first and most egregious problem with obscured body language is that it’s very easy to lie. And, not just about the big things, like height and weight, but about more important things like not being a complete creep.

When I would tell women that I was writing an article about online dating, I was shocked at how many had experienced disturbing dates–men so brazenly sexual that I can’t even describe the anecdotes on this PG-13 blog.

At least from this straight male’s perspective, women’s fibs were more mild, but also more prevalent. Almost every women on jDate and eHarmony is a professional adventurer who is preparing for a hike up Kilimanjaro. It seems like everyone was all about “travel” and “adventure.”

Thrill-seeking was so prevalent, that a friend sent me an A/B tested response, which I dutifully began cut and pasting into every communication. It began, “It’s so cool you’re into travel and adventure…” Immediately, the number of girls who responded sky-rocketed.

The successful experiment illustrated an important flaw in online dating: lying works. I’ve had my fair share of outdoor excursions and world travel, but it’s a rare occurrence. Describing my actual life of 15 hours/day at a computer, my career passions, and San Francisco social life was met with a digital cold shoulder. It’s only when I disguised myself as Crocodile Dundee did women want to talk…even if it was obviously untrue — Or, for that matter, an important part of a long-term relationship.

In the words of the researchers, “Because people can edit and revise text-based messages, they have more opportunities to present themselves in a strategic manner to convey a highly socially desirable image”.

Online Dating Does Not Lead To Better Outcomes

My experiment through the online dating minefield began as a fight with eHarmony’s data scientist, over a blog post claiming that eHarmony marriages had a lower divorce rate than other common ways of finding a lifemate. According to eHarmony, matches had the lowest divorce rate compared to couples who met in school, through family, at church, through Match.com or at bar.

After questioning whether eHarmony was drawing from a biased sample of people unlikely to divorce, especially since the service famously rejects people who aren’t compatible with their existing members, the eHarmony researcher argued that they do, indeed, have a representative sample of the U.S.. Additionally, the study controlled for important demographic characteristics.

Professor Reis, one of the member’s of the research team, seemed unconvinced.

“They clearly do not have a representative sample of Americans. It’s a highly motivated group of people who can afford their inflated prices, have computer access, etc. And then they screen out people with a history of drug or alcohol abuse, personality disorders, etc. It is more than likely that these factors account for their success, not anything inherent in their model. But to reiterate we don’t know since all this is secret. And that’s not science.”

In other words, eHarmony works because their members are yuppies, not because they’ve found the secret formula to matchmaking

It’s All A Numbers Game

The lesson from my experience is that dating is entirely a numbers game, and the search method is largely irrelevant. To test out whether any kind of matching service could compare to my usual method of asking girls for a drink at a party, I hooked up with the professional matchmakers at San Francisco’s It’s Just Lunch. For somewhere north of $1,500, they hand-select from among their well-paying members for a hot date at one of the city’s chic restaurants (IJL gave me a media pass to try out the service).

It’s Just Lunch paired me with the absolute worst and one of the best dates I had experienced (I have never had a date physically run out on me before).

So, despite my less-than-stellar experience with online dating, I’ll probably continue with an all-of-the-above approach. As the researchers pointed out, humans really aren’t great at knowing how to predict who they’ll fall (and stay) in love with.

Online dating, professional matchmaking, hitting on girls at parties — statistically speaking, they’re all hit or miss in the blind search for that special someone. And usually more miss than hit.