While it gives me little pleasure to call out New York Times writer John Broder for his clearly weird Tesla S test-drive, I do appreciate the way Elon and the team at Tesla called him to task for seemingly falsifying his experience in the car. I’d like to give Broder the benefit of the doubt – range anxiety is a real and frightening thing – Tesla’s Nate Silver-esque retort is quite illuminating and could change the reviewer dynamic.

Full disclosure: I write for the Times every few months and they’re nice guys, mostly.

I won’t bore you with more detail on the case (Darrell did that here) but I will note the value of the data provided by Tesla essentially destroys Broder’s punditry.

Broder is a car guy, and an opinionated one. He once wrote “yet the state of the electric car is dismal, the victim of hyped expectations, technological flops, high costs and a hostile political climate,” a line that Musk quotes in his blog post as proof-positive that Broder is biased. While his argument in that piece is far more nuanced, that’s what sticks out. A look at his other stories hows a skeptical eye towards electric cars. He also claims that his side of the story is far simpler than Musk describes: . He writes:

Virtually everyone says that I should have plugged in the car overnight in Connecticut, particularly given the cold temperature. But the test that Tesla offered was of the Supercharger, not of the Model S, which we already know is a much-praised car. This evaluation was intended to demonstrate its practicality as a “normal use,” no-compromise car, as Tesla markets it. Now that Tesla is striving to be a mass-market automaker, it cannot realistically expect all 20,000 buyers a year (the Model S sales goal) to be electric-car acolytes who will plug in at every Walmart stop.

Perhaps his experience was just as he described it – a muddle of confusion, fear, and poor planning. But Musk fights back with actual numbers and the outcome isn’t pretty. In fact, Musk claims that Broder drove the car around in tight circles for a little while just to get it down to zero range. Broder came at his test from the standpoint of a dude who likes to hop in a nice sedan and expects to drive a few hundred miles on a tank of gas. That’s not how you drive the Tesla… yet.

To be clear, Musk seems a little testy. Tesla has been burned once by Top Gear and getting a negative “review” by the NYT is a bad feeling (even if this wasn’t quite a review). But the most important aspect, and an aspect that may soon change the way we review almost everything electronic, was the ability for Tesla to pull logs right from the vehicle. 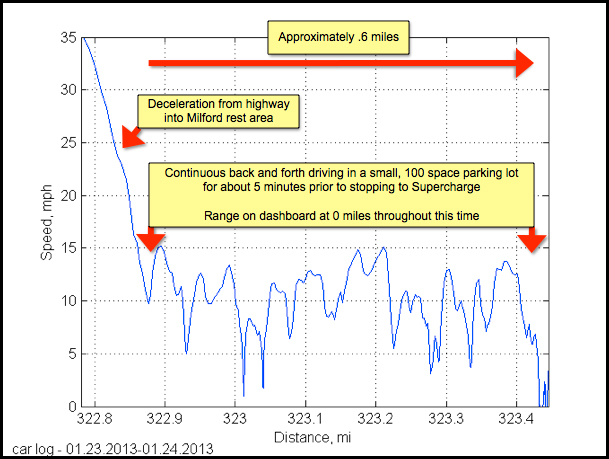 The Tesla S is a big computer. It’s also an experiment and, like any good experiment, produces data that is later assessed by experts. In the past, Broder could have driven a “dumb car” 100 miles an hour through the desert, run over a cactus, filled the car up with kerosene, and then slashed the tires. He could have then written a story about how the vehicle was sub par and the manufacturer would have little to say on the matter. Now, in an era where punditry rules the data will out.

No matter what Broder says in his defense, he can be proven wrong by the data. This should give tech reviewers pause. In a world when an objective review from one of the big boys can make or break a product, it is in the manufacturer’s best interests to spy on the reviewer. While I’m not saying this is right or particularly tasteful, I’m almost positive it will happen again.

We live in an era where almost everything we own is overpowered. There are plenty of extra cycles left on any common laptop, tablet, or other device to store a running log of performance and activity, a log that manufacturers should and will use to ding us. That this hasn’t happened more often in the electronics world suggests that marketing managers just didn’t think of it first. You can say that a product sucks, but you can’t argue with a robot when your review process is faulty.

I don’t feel bad for Broder. If what Musk showed is true, he elided quite a bit in this assessment and he got called out. I also don’t feel bad for Musk. He and his cars need to take their lumps. You can claim “big gas conspiracy” or “bias journalisms” all you want, but anything new is frightening and it’s the journalist’s job to warn us of potential danger. Proving that a journalist drives donuts in a parking lot for fun could be relevant to the value of his coverage, but what would have happened if Musk had handed him a thumb drive with all of the data on it after the test was over? Had Tesla explained all of the data to the journalist as a matter of course, Broder would probably singing a different tune. He would also be far more careful about his drive, just like a real Tesla owner would.

I understand the impetus to “get back” at a journalist. Using the robot to play gotcha is satisfying but it’s no better than a reviewer who fakes a review and gets away with it. A middle ground can, and must, be found.