German luxury brand Loewe experienced a roller coaster day. A trader commented that “Apple supposedly wants to bid 4 euros a share for Loewe,” which sent Loewe shares up as much as 44.5 percent to 3.93 compared to yesterday’s closing price of 2.72. The German stock exchange closed today with Loewe shares trading at 3.35, representing a one-day increase of 23.16 percent.

In May 2012, rumors surfaced on AppleInsider that the company was interested in the German TV manufacturer. Even though Loewe denied the rumor and Apple declined to comment, a buyout wouldn’t be a big risk for Apple. Loewe’s market capitalization is around $58.6 million (€43.58 million).

Yet, Apple would have to convince major shareholders. Sharp now owns 28.8 percent of shares, Loewe’s executives 14 percent and hard-drive manufacturer LaCie 11.2 percent. The German company reported $39 million (€29 million) in losses in 2012. Selling the company to Apple or anyone else would be a way to exit the tedious luxury TV market.

For Apple, Loewe could represent another small strategic acquisition. Yesterday, Tim Cook said that the company closes a deal every other month.

But analysts and traders may be reading too far into the rumors, which were alone responsible for Loewe’s share increase today. It remains to be seen whether those analysts are too excited by Apple’s rumored TV plans or whether they are actually hearing talks between the two companies. 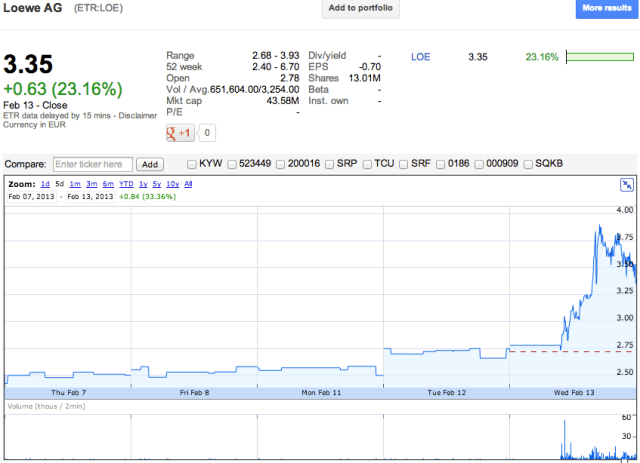