Today, it seems that everyone you know has their own startup. While this might be good for the economy long-term, it also has the makings of a talent drain. As more and more startups hit the scene, companies find themselves in a war for talent — especially of the technical variety — making it seemingly impossible to secure those top engineers, designers and data scientists.

GroupTalent launched in December 2011 to help provide a solution. To help simplify the job search for the technically proficient (and the companies that want to hire them), GroupTalent has developed a matching engine that automatically pairs talent with relevant projects and vice versa.

Today, with over 4,000 developers in its recruiting network, the TechStars grad is announcing that it has raised $1 million in seed funding to scale its platform and add some talent of its own. The round was co-led by Version One Ventures and Founders Co-op, with contribution from Menlo Ventures.

As Sarah wrote, there are already plenty of job boards and recruiting marketplaces out there, and GroupTalent isn’t interested in adding more me-too noise to the market. Rather than creating another oDesk or Elance, the startup wants to focus on the talent itself (and connecting them with projects that lead to full-time employment), rather than catering to employers looking for short-term freelancers.

Initially, GroupTalent’s network consisted largely of requests for technical help from early-stage entrepreneurs and founders looking for part-time help to extend the runway for their businesses, but since then, the startup has expanded its scope. Additionally, in a crowded space, the startup is trying to stand out by offering a curated marketplace in which only some 20 percent of applicants are admitted into its network. If engineers don’t have the chops, GroupTalent sends them packing.

Today, the software-powered, talent-matching engine aims to help companies fill critical engineering roles with skilled contract or full-time talent within 48 hours of the project’s submission. This, says GroupTalent CEO Manuel Medina, is another quality that helps it stand out in the “drum-tight market for software talent.” To stay focused on the needs of developers and designers, GroupTalent allows talent to decide how they’re going to engage with employers, the terms of their employment and what types of projects they actually want to work on.

“By really focusing on what the talent wants, we’re creating a new category of on-demand staffing for highly technical and strategically critical roles,” Medina tells us. And, by doing so, the CEO believes that GroupTalent ends up more effectively serving the needs of employers in turn, while giving them access to top talent on-demand.

GroupTalent’s quality-focused model has attracted customers like Crowdstrike, Timbuk2 and Midokura. Crowdstrike VP of Engineering, Dr. Sven Krasser, tells us that, when the company “hit a wall” in product development, it began looking for part-time talent to add a fresh perspective to help get things moving again. They found a developer on GroupTalent who was able to jump into the stack and work alongside the team, and, because it was a good fit, CrowdStrike has since hired the developer full time.

To help it make money, GroupTalent charges a 20 percent premium in addition to the rate set by developers and designers. Currently, the startup does not charge a recruiting bonus if and when the talent decides to join the company full time, but this is something that could change in the future. Typically, projects submitted range from $10K to $100K, depending on the type of work being requested.

Because most of the top engineering talent is drawn to work at startups, bigger companies that are looking to become more technologically savvy have a tough time attracting the best talent. By focusing intently on recruiting engineers and designers from the startup talent pool, GroupTalent helps these companies gain access to talent they might not be able to tap into otherwise.

Over the last year, the startup’s network has grown from fewer than 100 developers (in January of 2012) to just over 4K by the end of the year. In turn, Medina says, employer opportunities have increased 80 percent since July of last year and, with its new funding in tow, GroupTalent wants to accelerate that rate and double it in 2013. GroupTalent is joined by startups like Entelo, Gild and Talent Bin, each of which are offering their own spin on the next-gen recruitment process, resumes and talent assessment. 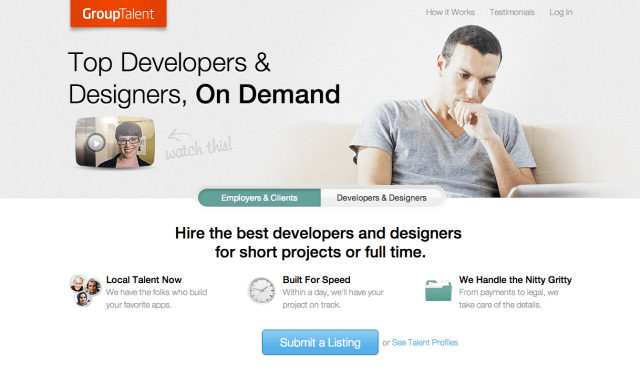