After leaving the Nokia fold, back in October, it was rumoured that Vertu planned to do what many a Nokia fan still wishes that company would do: ditch Symbian and adopt Android. Today Vertu unveiled its first Android-powered phone, along with a new slogan: “Handmade in England. Powered by Android”. 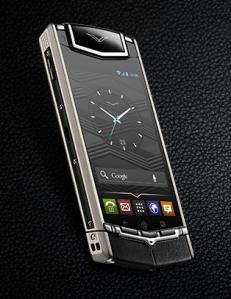 The Vertu Ti runs Android 4.0, skinned with a dedicated Vertu UI. The handset costs from a whopping €7,900 — approaching $11,000 — for which you also get a 3.7 inch “virtually scratchproof sapphire crystal screen”; a grade 5 titanium strong-but-lightweight casing; a dual-core 1.7 GHz processor and 1GB of RAM; an 8 megapixel rear camera with 1080p video capture plus a 1.3 megapixel front-facing lens; 64GB of internal memory; and ‘Bang & Olufsen tuned’ sound. What you don’t get: 4G.

Speaking to the BBC, Vertu CEO Perry Oosting explained why the company decided to adopt Android, rather than follow Nokia’s lead and opt for Microsoft’s Windows Phone platform. “You need to be part of an ecosystem,” he said. “Your device will have to integrate with other devices. I think the Windows phone will have success but it is still a relatively small market share. At the moment it doesn’t have the global reach of Android — which is about 60 per cent of the market.”

Oosting didn’t mention Android’s openness to being customised but Microsoft’s refusal to allow mobile makers to skin Windows Phone with their own UIs may well rule out any luxury brand tie-ins, since Windows Phone currently offers limited scope for branding — beyond being able to display a branded homescreen Live Tile.

Despite (finally) reaching the conclusion that ecosystems are king, Vertu still obviously sells to a very exclusive club of buyers — with huge amounts of cash to spend on a phone. There are just 326,000 Vertu smartphone owners globally after 10 years in the industry, according to the BBC. China is said to be Vertu’s biggest market.