Apple and Google are enemies and partners at the same time due to asymmetric competition. According to a report from Morgan Stanley, Google could pay more than $1 billion in 2014 to remain the default search engine on iOS. In 2009, Google paid only $82 million for the privilege. Analyst Scott Devitt believes that it is a per-device deal growing every year.

To put it into perspective, the Mozilla Foundation should get $400 million in 2014. Google remains the main contributor to the organization as one can read in Mozilla’s reports. Opera is another longstanding partner, but Morgan Stanley doesn’t give figures for this deal.

Over the years, Apple has gotten more revenue from Google as Microsoft has been pushing very hard and bidding to make Bing the default search engine. For example, Bing is now the default provider on Nokia and BlackBerry devices. Money is a major incentive for Apple. But selling a Google-free iPhone could dictate the company’s next move.

Yet, Apple shouldn’t shy away from $1 billion. As a company, profit is the most important metric. Google provides an easy way for the company to cash in a significant sum of money every year. At the same time, Google pays more money to Apple than it directly generates from iOS users. But user data is worth a lot. With only $2.9 billion in profit last quarter, it’s a non-negligible way to affect Google’s bottom line.

But the smartphone space evolves very rapidly. As Samsung is now the dominant manufacturer, the Apple-Google deal could peak soon. Google will watch closely how market shares change and could end the deal or lower its terms at the first opportunity. 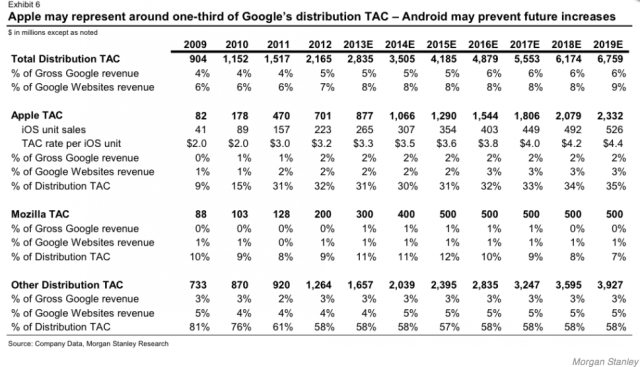