AOL’s Q4 earnings today saw that company (which owns TechCrunch) finally make a turnaround, after 8 years of decline, into revenue growth, with overall sales of $599.5 million. But there are still a lot of areas that are seeing flat or declining revenues, and some that are loss-making: among those is AOL’s hyperlocal effort Patch. On the investor call today, CEO Tim Armstrong admitted that the division had not reached its revenue target of $40 million-$50 million, and that it was still unprofitable (specific losses not released), but that the aim was for it to reach profitability by Q4 of this year.

Making money in hyperlocal is not always proving to be easy. NBC just yesterday shut down its own hyperlocal service EveryBlock after “struggling with the business model.”

Armstrong appears to remain committed to Patch, however. “I’ve been spending a fair amount of time at Patch,” he noted. It’s seen 41% growth among users in December, and it’s still beating down expenses, with costs down by “double digits.”

On the other hand, part of the challenge for Patch, he noted, was Sandy. “We didn’t expect the Sandy storm and it followed the path of Patch rollouts,” he noted, and that had a direct impact on ad revenues, particularly in the local ads segment. But, he noted, Patch became more essential at the same time as people looked to the site for information.

Another area where Patch may see some developments is in the area of partnerships. “We’ve had a lot of companies approach us on partnerships,” Armstrong said. He described AOL as taking the “Walmart approach,” with Patch, by giving small-town people a big-town experience. The hope is for Patch, Armstrong noted later in a phone interview, is to become a kind of channel for smaller communities to have the same kind of coverage that larger cities get in their news and information sites: in effect, even suburbs should have their own Time Outs, filling in the gap created by the downsizing or closure of other local media properties such as newspapers and broadcasters. And then, advertising should follow: Armstrong noted that Patch now covers 10% of suburban communities — “but they represent 30% of GDP,” he said, because of their affluence.

For now, though, Patch remains a drag on revenues. “Our Patch investment has influenced the margins over the years,” said Karen Dykstra, the CFO. The company chose to leave Patch out of its larger OIBDA expenses calculations. 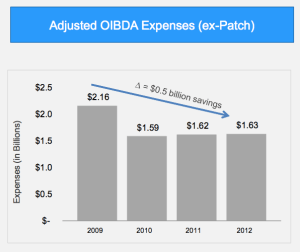 Other businesses that were mentioned on the call include AOL Music. Powered by Slacker, it is “about the size” of Spotify in the U.S. in terms of traffic. However, with 10 million monthly uniques, it only just about cracks the top-10 music properties in the U.S. at number 8, COO Artie Minson noted, and “we’re not satisfied at all at being number 8.”

He said that AOL has relaunched a number of properties such as Moviefone “and we think that to unlock value in music we have to update the product.” There was no timeline given on when that would happen. It also sounds also like AOL will be looking to put its Music property closer to other sites, such as the teen-focused Cambio.com, to bump up users and usage.

Later on the phone, Armstrong wouldn’t rule out that this might lead to partnerships with other music companies beyond Slacker (perhaps with Spotify, which works with Yahoo, or others): “I don’t have any announcements at all on this, but we’re thinking deeply about the music space, thinking organically and partnership-wise,” he said. “It’s a space that is interesting and exciting.”

One more property that looks like it will get some more attention is Mapquest. Armstrong noted that a new subscription service is in limited beta right now and the expectation is for that to roll out further in Q2. “The opportunity here is in data,” Minson said, “where people are going in their cars. That’s an interesting B2B opportunity.” This is a route that companies like Nokia have followed by partnering with carmakers to embed its Here mapping service, such as a recent deal with Toyota.

That speaks also to AOL’s wider mobile ambitions and whether it will look to refocus efforts there. AOL, if you recall, restructured its mobile operations last year, leading to a number of people leaving the company and some functions getting more localized among different properties and brands. Today, it’s a mixed picture for AOL and mobile. There’s clearly lots of opportunity for advertising there but traffic, and perhaps strategy, is very uneven. AOL.com only sees 10% of its traffic from mobile devices, while on sites like Engadget and TechCrunch, mobile can be up to 50% of all traffic.

Update: Further comments added in above from a phone interview with Armstrong after the earnings call.