Google loves everything that makes the web faster. Given that images typically account for more than half of a web page’s size, it has now been working on its own WebP image format for a few years. Using WebP, Google says, results in images that are significantly smaller than those encoded in the far more popular PNG format. After introducing the new format in Chrome, Picasa and Gmail in 2011, Google today announced that it has also started using it in its Chrome Web Store.

The Chrome Web Store is obviously a good target for WebP, given that its users are likely using Chrome. The only other browser that currently supports the format is Opera. 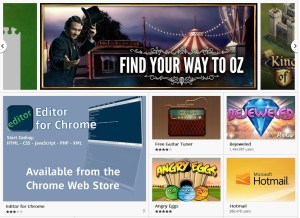 Google, which is also clearly trying to get some support from developers and other vendors with today’s blog post, says that WebP “offers significantly better compression than these legacy formats (around 35 percent better in most cases).” As for the Chrome Web Store itself, Google says that converting the PNGs that it used to use for the large promotional images in the store to WebP allowed it to reduce image sized by about 30 percent. Given the reach of the store, Google says, this “adds up to several terabytes of savings every day.”

More importantly, this also brought the average page load time down by nearly one-third, which is obviously what Google is really interested in.

Besides talking about the Chrome Web Store, Google is obviously hoping that developers will take a second look at WebP, which hasn’t made a lot of waves so far. While quite a few image editors now support the format, the reality is that WebP barely registers on the web today. Instead, PNG is now the most popular image format on the web, followed by the venerable old Graphics Interchange Format (GIF).