Back in August, we wrote about the launch of a startup non-profit organization called Watsi, which offers anyone and everyone the opportunity to fund “low-cost, high impact treatment” for those who lack access to necessary care. Again, considering the fact that there are more than one billion people who are unable to afford adequate medical services (or don’t have access to them), Watsi’s mission has enormous (global) implications. And, honestly, it’s a pleasure to see a startup tackling such a big problem, in spite of the fact that it’s inherently complex, thorny and nearly impossible to solve.

Today, we’ve learned that Watsi also caught the attention of Paul Graham and the Y Combinator crew. In a post published this morning, the YC co-founder says that he (like us) discovered Chase Adams’ venture as part of a discussion on Hacker News. “After about 30 seconds of looking at the site,” he says, the “revolutionary” potential became clear. As a result, Watsi is officially the first non-profit that Y Combinator has funded and accelerated to date as part of YC’s 2012/13 program.

For those unfamiliar, Watsi is crowdfunding for a good cause, a Kickstarter for funding quality medical care in third-world countries — applying that familiar model to global healthcare. The platform allows donors to be able to make direct, personal connections with their beneficiaries (donating as little as $5 or as much as they want) in an attempt to put a face on what can be very inhuman and impersonal statistics around global healthcare (or the lack thereof). 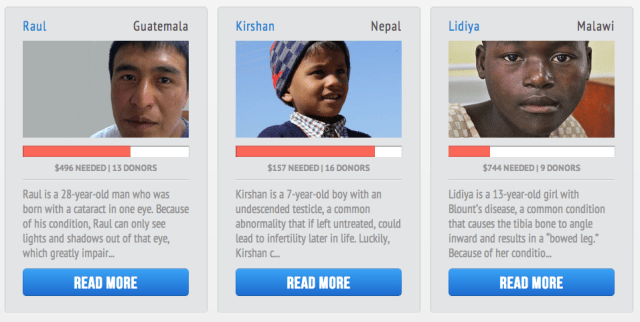 Like Kickstarter’s businesses, each person has his or her own profile which includes pictures and a synopsis of the person, describes their condition, what they need, where they’re from and so on. Again, while there have been scams that have operated on similar premises before, Watsi is the real deal and isn’t just out to make a buck.

Founder Chase Adam tells us that Watsi is hoping to fight the traditionally high costs of healthcare by working with doctors, providers and payors (when they exist) to donate their time, research, materials and equipment to reduce overhead. In turn, because the procedures sought by Watsi campaigns take place abroad, they tend not to have the same cost one would find in the U.S., and thus, they don’t have to raise the same amount.

What’s more, as Graham describes in his post, peer-to-peer fundraising channels have the tendency to be disruptive when introduced to unfamiliar spaces and markets. Although it takes work and the willingness to set the bar high (in spite of regulatory friction, legacy infrastructure, distribution, pay channels, etc), it also can come with a “much higher level of transparency.”

Watsi offers 100 percent of the donations it collects from the crowd to the person in need (specifically to fund their medical treatments), thanks in part to Watsi.org being funded separately. Graham also says that the startup is paying “all their operational costs from their own funding, and none from your donations,” and in turn, even stomach credit card processing fees. A noble gesture in its own right.

That, in practice means, that more of your money goes to people in need, not to funding the administrative costs of the company itself, or towards grabby hands in between. It’s the same theory behind Crowdtilt’s (another YC company) move to support non-profit organizations (and tax-deductible donations) on its crowdfunding platform.

It’s great to see the Y Combinator partners so excited about giving back. “I’ve never been so excited about anything we’ve funded,” Graham concludes. And Harj Taggar just had this to say, via tweet:

What’s more, since we last covered Watsi in August, we’ve learned that the company has been building some solid early traction. The platform has funded 75 treatments thus far, raised about $60,000 for patients, received 1,300 donations and is now operating in eight countries. In all, Adams tells us that 20 percent have donors have already returned to donate for a second time and 30 percent of giving is coming from outside the U.S. and that Watsi is currently seeing about 28 percent average week-over-week growth.

Oh, and Ron Conway has also made a generous philanthropic contribution to the site as well, Adams tells us.

Go check out Watsi here, in PG’s post here and find a more extensive background in our prior coverage here. 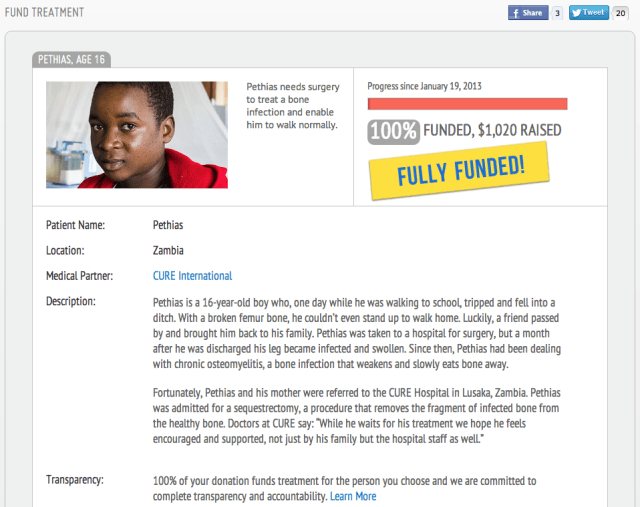