With a lot of people in the United States off for the national holiday, Twitter appears to be buckling under the pressure. Right now, the service is experiencing issues, including the inability to connect to any of its official apps. As is usually the case, the problems are intermittent and don’t affect all users.

Sadly, when the service goes down like this, there isn’t an explanation like there used to be. Remember the fail whale? We haven’t seen that guy in quite some time. Now when the site is down, we end up getting a white screen in our browsers.

The company added this message to its status site:

Our engineers are currently working to resolve the issue.

Currently, the site is up and down, and you also get error messages when clicking a tweet button on a website: 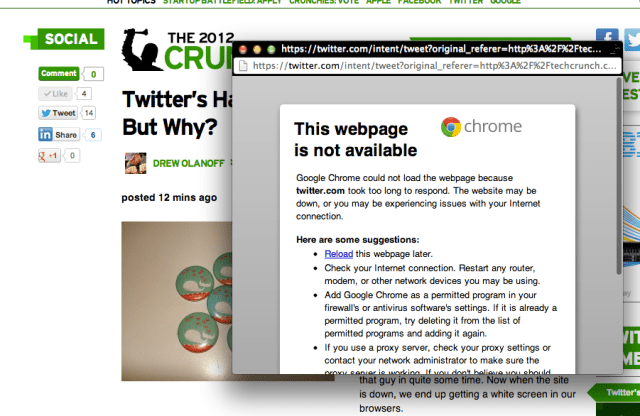 This is the second “site issue” that Twitter has had in the past four days, and the company doesn’t go into any detail on what the problem was or is. As a communication platform, it’s key for Twitter to be up as much as possible. While it’s understandable that every service has downtime issues, it seems to be a dirty little issue that has followed Twitter since it launched in 2006.

Why can’t the service stay up and what are the problems that they’re experiencing? These are questions that are hard to answer, even when we ask. What I do know is that when a site goes down and there is little or no communication to its users about it, hours are spent asking one another “Is Twitter down or is it just me?” In a word, it’s annoying for everyone involved.

Complex issues face every company at this type of scale, including Facebook and Google. The issue with Twitter is that it’s the leader in real-time communication, therefore its users experience all of these problems in real-time as well. This is similar to something happening with AT&T and you not being able to fire off a text message and not knowing why. While Twitter is free, it does have an obligation to communicate with its users, since its intent is to be the “pulse of the planet.” It’s kind of hard to be that when you tend to flatline at random moments.

If we’re supposed to trust Twitter when we’re trying to follow things like the President’s inauguration, there needs to be more of an explanation when things go wrong. The company has raised $1.16B to date, has major marketing, partnership and advertising initiatives happening, while also trying to make a real run at going public we hear, so these questions do need to be answered.

So why are you going down, Twitter? Stop posting promotional stuff like this if you can’t handle the load.

UPDATE: Twitter is still down but have no more details to share. Well, because their status site hasn’t been available at times, either.

UPDATE 2: We’re still hearing from readers that Twitter’s apps aren’t working and their site is hit or miss. This “site issue” have been going on for 4 hours now.

UPDATE 3: Twitter has issued the following statement on its status blog:

Update: This incident has been resolved.