Tagged isn’t doing too shabby, introducing you to people to flirt and make friends with online. It’s got 300 million registrations and 3 million daily users. Now it’s stepping into offline meetups by launching standalone app Sidewalk that feeds you fun happenings in your city, as well as who you might run into where you’re hanging out. Snap a geo-tagged photo of what you’re up to and a fellow Sidewalker might come say “Hi!”

Sidewalk is now available for iOS and Android, but is only operating in San Francisco for now.

Time For Tagged To Tap Mobile

When Tagged debuted its site in 2004, it thought it was going to be Facebook. In a stunningly candid interview, CEO and founder Greg Tseng tells me “For three years we competed to become the world’s social network. We realized by the end of 2007 that there was going to be one winner and it wasn’t going to be us. So we made the difficult decision to pivot into social discovery, which is a fancy way of saying ‘meeting new people.'”

That worked. Fifteen million users a month flock to Tagged to browse profiles of potential dates or friends and play games. It just finished its fifth consecutive profitable year thanks to ads, virtual currency sales, and subscriptions to premium features. But there’s no rest for Tseng. He admits: “Tagged is a web company. We’re reorienting to become a mobile company because we’re convinced the future of social discovery is in mobile.” It’s got its main Tagged app, and has tried and failed with some other roughshod apps that it’s since killed off, but it’s putting its weight behind Sidewalk.

‘Intrepreneurship’ Laid The Foundation Of Sidewalk

Tagged used a startup-within-a-startup strategy Tseng calls “intrepreneurship” to develop Sidewalk. Working independently inside of Tagged, the 15-person Sidewalk team is led by Jared Kim, founder of WeGame, which Tagged acquired in 2011. Tseng says the game plan lets Sidewalk “operate like a startup with all the advantages of being small and nimble, but not the problems of having to raise money and hit arbitrary venture-capitalist targets.” They can use as much or as little of Tagged’s infrastructure as they like.

Building Sidewalk as a standalone app rather than as a feature of Tagged also protects the company. Kim tells me “With Sidewalk we have nothing to lose, but Tagged has a lot to lose. We can be like, ‘Hey, turn that button orange.’ On Tagged that could mean ‘oh we just dropped 5 percent in revenue.'” It also prevents Tagged from getting bloated.

Tseng explains the need that Sidewalk addresses and why it’s a critical complement to Tagged: “We’re all social animals. We’re all constantly refreshing our 150 connections – Dunbar’s number. How? We don’t normally wake up and say ‘let’s meet people!’ You go through your life and new people slow in. It happens very naturally, organically — it’s serendipitous.”

The idea is that you’ll open Sidewalk, discover something fun going on nearby, get off your butt and go there, and meet people, including this post’s author, as you share an experience together. There are no gimmicks, forced ice breakers, or private messaging. Sidewalk also has less anonymity, and more barriers to bad acting than online social discovery where Tagged made its name. The app is simply a portal to connection around real-life moments.

Tseng believes this sets Sidewalk apart from Highlight, At The Pool, and other apps that he believes don’t work. He thinks those competitors assume you can meet people “based on interests or being friends, but it’s just not happening.” I haven’t found those apps too compelling, either, but I see potential in Sidewalk.

Sidewalk greets users with the message “Let’s discover San Francisco together.” The design language employs a swirled watercolor motif, symbolizing the app’s desire to help people express the unique way they bounce around their city. Sidewalk is immediately refreshing because there are no privacy controls to think about or social graph to recreate. Everything you share can be seen by everyone in your city, and you don’t follow people. Instead you browse a two-column feed of relevancy-sorted photos with descriptions and optional (but encouraged) location tags. 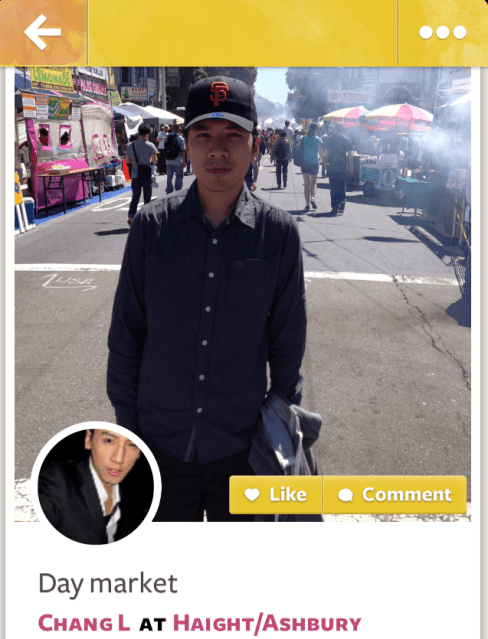 Click through to see photos full-screen, check out a map of the specific spot or neighborhood where they were taken, and leave a comment. The absence of private messaging keeps things casual and keeps users from being hit on too aggressively. Instead, you could comment on someone’s post that you’re going to join them there, arrange a meetup, or just thank them for showing you something exciting.

If you’re somewhere interesting, tap the ‘+’ button to share. A camera launches or you can choose an existing photo of yours, then add a description and location. There are no filters or photo editing. Sidewalk isn’t trying to be Instagram. It’s not about taking art for art’s sake. It’s about showing what you’re doing to guide others. Tagged hopes Sidewalk will become a “for locals, by locals” app where people share stuff that will excite their neighbors rather than posting about tourist traps.

As for being SF-only, Tseng tells me “It makes sense to start in San Francisco because that’s what we know. If and when we can dominate SF and we see the product really works, then there must be some secret sauce, and we’ll try to replicate that formula in other cities.” For now Tagged is aggressively buying Facebook mobile app install ads to jumpstart growth. Tseng says he’ll know Sidewalk has succeeded based on seven-day retention metrics, and “if people are getting enough value out of this they’re continuously going back.”

Breaking people’s habits of sharing photos for the sake of sharing will be Sidewalk’s big challenge. I see plenty of selfies taken at home and artful pics of candles and coffee. Instead Sidewalk needs to get people creating posts that serve as mini travel guides. I’ve already discovered some cool happenings and places like street markets, vista points, and beer gardens.

“Sidewalk is your real-time eyes and ears to the whole city,” Tseng beams. We’ll have to wait and see if enough people open up.