ChoreMonster launched an update to their app a few days ago that includes a parents section, a redesign of the kids section, a new Monster Carnival and yes…even a new character named TeeCee exclusively for all the TechCrunch readers out there. We never asked for this, but I have to say… “Damn it feels good to be a Monster.”

The website/mobile app ecosystem designed to get kids to do their chores officially launched at the turn of the year, is decently documented,  and recently raised $775,000 in funding. Indeed, “after eight months in private beta and with over 300,000 chores completed” ChoreMonster is available to the masses for $4.99 a month and believe me, this spells HAPPY NEW YEAR to a bunch of parents out there.

In short, the website/app is a calculator that lets kids collect points for completing their chores. These points can be  exchanged for real-world rewards designed and granted by their parents (basically for doing the kind of tasks my parents just sorta made me do). But this is a much more civil age, and any kind of motivational force to get kids to clean up after themselves should be lauded.

I found an interview with one of the founders I shot recently. Chris Bergman, does a much better job explaining the concept than I could. In the video, he even shows me a concept for the above-mentioned character called TeeCee that they were actually serious about adding to ChoreMonster. Rad!

But I also reached back out to Chris to get a few more details about how things are going at the ChoreMonster HQ, since we last spoke.

JD: “First, what exactly are the details about TeeCee. What’s his M.O.?”

CB: “He’s a cleaning monster. He cleans all the crumbs and food particles out of your gadgets and devices.”

JD: “Have you conducted any primary research into how kids are reacting to ChoreMonster? Is it working?”

CB: “Yeah, it is working. Kids, in general, are more interested in collecting the monster characters than getting rewards. Actually, 63% care more about collecting monsters than they do about getting rewards from their parents for their chores.”

CB: “Well, Paul Armstrong (co-founder) had been drawing monsters with his son quite a bit. His son really liked them. I had this idea for a chore app, and the two ideas just sort of came together.”

JD: “You guys have raised a decent amount of money. Are you going to stay in Cincinnati? What’s your opinion of the Midwest as an economy for tech startups?”

CB: “Yes, we are definitely staying in Cincinnati. We love it here. I’m glad you asked about the Midwest startup scene, because we are big fans of it. Unique things are happening in the Midwest; people are more available, office space is cheap…there’s just a general honesty and authenticity here which is nice. We have to raise less money and give away less of our company to operate here, and that feels good.”

JD: “What’s next for ChoreMonster?”

CB: “We have some really big plans ahead, that we can’t discuss just yet, but will keep you posted.” 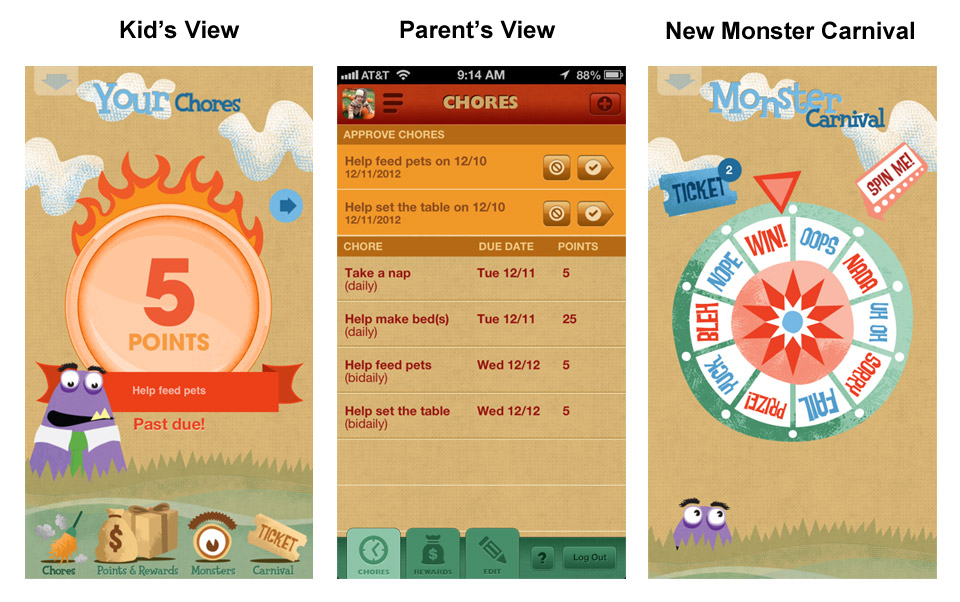