According to new figures released today from mobile commerce startup Branding Brand, mobile commerce over the 2012 holiday season saw major gains, with visits to m-commerce websites up 109 percent year-over-year, page views up by 116 percent, conversions up 30 percent, and sales up by a whopping 171 percent.

The company pulled the data from 84 mobile websites across a number of verticals, including apparel, health and beauty, and home goods. As usual, its report offers an interesting slice of the overall e-commerce industry and associated trends, as Branding Brand works exclusively with retailers to build smartphone-optimized mobile sites and mobile apps. That means the data it collects reflects the behavior taking place on mobile-friendly websites, as opposed to non-optimized desktop sites that users happen to visit on their mobile phones.

For the purposes of this latest report, the company examined sales starting the day before Thanksgiving through (and including) Christmas Day. This index of websites, in aggregate, saw 77 million visitors, 413 million page views (63 percent iOS and 33 percent Android), 620,000 orders (69 percent iOS and 28 percent Android), and average order values of $84.66 ($85.21 iOS and $81.54 Android). When charting the sales growth, it should be noted that Branding Brand’s index included smartphone websites that were live in both Holiday 2011 and 2012.

Despite the increase in sales and conversions, the average order values decreased 5 percent, year-over-year, the report found. Company co-founder Christina Koshzow tells TechCrunch that this decrease might be attributable to more retailers offering free shipping this holiday season. That’s a good bet, as comScore had also previously reported free shipping offers had been a popular promotion this year, with the so-called “Free Shipping Day” of Dec. 17 bringing in $1.01 billion in total online spending.

Chris Mason, Branding Brand co-founder and CEO, also mentioned that during the holiday period on average, there were 137 page views per second, and 12 orders per minute on Branding Brand’s mobile websites. The biggest day in visits was Black Friday and the biggest day in revenue was Cyber Monday. The biggest hour, in terms of smartphone visits, was 9 PM on Thanksgiving; in terms of revenue, it was 11 PM on Cyber Monday. Overall, the biggest growth day for revenue was Sunday, November 25th, which saw a 367 percent increase. 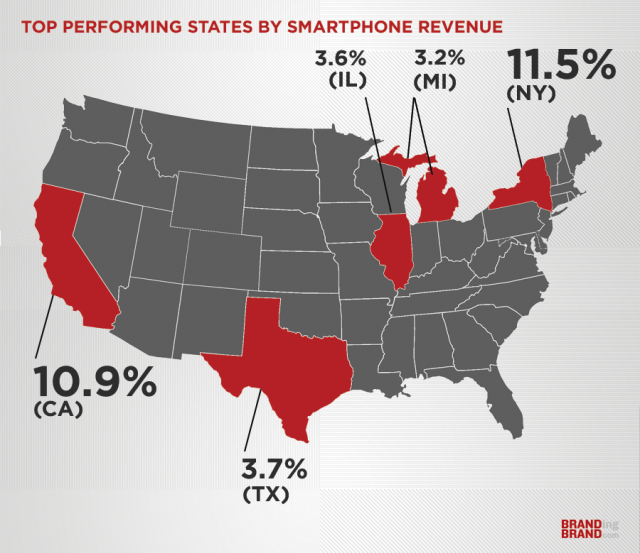 These numbers are interesting to look at in comparison to larger e-commerce trends, such as those above-mentioned online holiday shopping figures comScore puts out every year. Earlier this month, comScore released its final holiday spending figures, finding that online shopping again increased year-over-year, up 14 percent from the $37.2 billion comScore reported last year to reach $42.3 billion. The firm noted that shoppers slowed down around mid-December and again towards the end, as concerns about the then-looming “fiscal cliff” grew.

Still, by the end of the season, comScore’s report of a 14 percent jump was basically par for the course, if just a bit lower than before. (Sales grew 15 percent in 2011, and 16 percent in 2010). But comScore’s numbers look at e-commerce in general – they don’t drill down into m-commerce like Branding Brand’s data does. 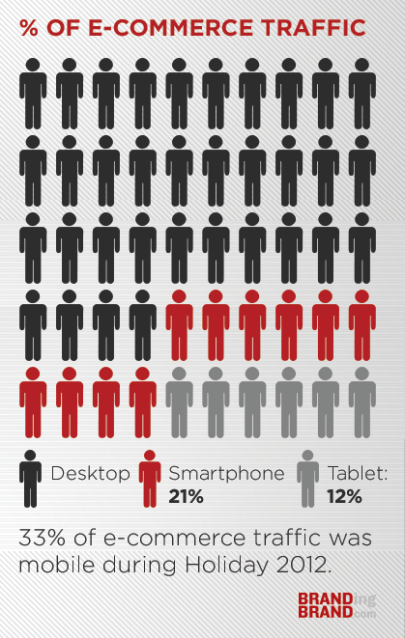