Smartphones with very large displays are set to take a much bigger chunk of the market this year, according to analyst IHS iSuppli which is predicting so-called phablets will more than double their share this year. iSuppli is forecasting that 60.4 million units will ship in 2013, up “a notable” 136 per cent from 2012’s 25.6 million. The prediction comes from the latest IHS iSuppli Mobile Handset Displays market tracker report.

iSuppli defines a phablet as a smartphone with a display of 5 inches or more. Recent additions to the phablet family include a 6.1 inch whopper made by Huawei and a 5-incher unboxed by Sony — both of which broke cover at CES. iSuppli notes that Chinese mobile makers are taking a lead in launching phablets, with Lenovo and ZTE also showing off huge phones at the tradeshow.

The analyst believes the phablet market will continue to swell after 2013 — with “vigorous double-digit-rate expansion” predicted for the next few years, as availability of large LCD displays ramps up and helps to bring screen prices down. By 2016 the analyst’s forecast indicates annual phablet shipments could exceed 140 million. 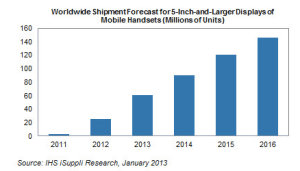 As I argued in a recent opinion piece, the phablet form factor may be a bit awkward in the hand but it’s easier on the eye when it comes to reading text, watching video and interacting with rich multimedia content — and iSuppli also flags up the increase in rich smartphone content as a factor fuelling phablets’ growth. Device makers seeking to differentiate their handsets by standing out from the average-sized smartphone crowd is another.

“The move to offer larger-display smartphones reflects the efforts of both device and panel makers to differentiate their products,” said Vinita Jakhanwal, director of small and medium displays at IHS iSuppli, in a statement. “With consumers demanding more lifelike viewing experiences, the trend to offer such devices makes perfect sense, especially considering the increase in rich content that is being made available on smartphones.”