A big step forward for China’s search giant Baidu as it looks to raise its international profile and credibility in mobile: the company has inked an exclusive deal with mobile carrier France Telecom/Orange to co-brand and pre-load its new Baidu mobile browser on Android smartphones sold in Africa and the Middle East, covering 19 countries where Orange operates in the region.

The deal is important for both companies. For France Telecom, a customized mobile product could be a way to attract new users in a still fast-growing smartphone market. It can also use it to drive higher-margin data services and revenue through advertising on smartphones. For Baidu, it’s a way to demonstrate to investors and the rest of the market that it is serious about growing its mobile business internationally, to shore up its basic domestic web search business. Baidu’s mobile effort has also included a mobile content JV with Docomo and its own forked Android phones.

The deal is exclusive for one year and will mean that France Telecom will be promoting the co-branded, customized Orange-Baidu Browser to its existing 75 million customers and new users in the region. Orange has operations in 20 countries in AMEA (Africa, Middle East and Asia), including Egypt, Iraq, Morocco, Kenya, and the Ivory Coast. The aim is to take the total number of users in the region to 300 million, with sales of €7 billion ($9.4 billion) by 2015, according to Marc Rennard, SVP of Orange in AMEA. The browser will be localized for each market, the company says.

Baidu first unveiled the browser in September last year as part of its big attack on mobile — at the time noting that it would be selling it via the carrier’s Mobinil network. This appears to be an extension of that deal, covering the entirety of Orange’s footprint. Orange is the No. 3 carrier in the region behind MTN (164 million users) and Vodafone (92 million users).

France Telecom says that it will be shipping the first smartphones pre-loaded with the browser sometime later this year. But from today, those who already own Android devices in the region will be able to point their phones to a link for a free download, says Orange’s VP of innovation for Africa, Middle East and Asia, Arnauld Blondet. This will work on all versions of Android 2.0, aka “Eclair.”

Chinese companies have long eyed developing markets like Africa as places for expansion beyond their home territory. It’s a strategy that has worked to great effect for companies like Huawei and ZTE with network equipment, with deals for cost-competitive kits underpinned with well-termed vendor finance agreements with the carriers to seal the deal.

In the case of Baidu and Orange, the companies are not disclosing the financial details, except to note that both will benefit from the partnership.

The deal will give Orange a way of further customizing its Android devices to differentiate them from those sold by other carriers, in markets where smartphone growth is still at an early, quickly expanding stage, growing at 6.3 percent compared to just 1.5 percent in Europe and 2.3 percent in the U.S.

It will also give the carrier a more direct way of pushing certain services directly to users, with the browser localized for each market. Considering that a lot of carriers have fumbled the ball with apps and extra services in more developed mobile countries — with Apple and Google running things with their developer ecosystems — this gives Orange a crack at getting off on the right foot earlier in the game. 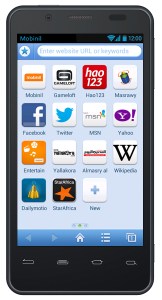 some time — however stopping short of rolling out “forked” versions of the platform, a route that has been popular in other markets like China.

It had spoken to “all the big browser companies” one person close to the situation told me, which included Opera and Mozilla. Baidu won because it offered the fastest browsing with the lowest data consumption, with data compression up to 90 percent in some cases — important in a market where users are especially cost-sensitive and most of the data traffic will happen over metered 3G rather than Wi-Fi networks.

Orange will also be using Baidu’s user interface — which opens with a page of icons linking to web apps — to promote a selection of services it endorses, such as Wikipedia and Facebook, along with its own homegrown media and communications apps. There will also be links through to download further web apps.

The idea is to put as much of the content as possible into the cloud, although at some point the two may also begin to offer downloads of native apps via the browser. And while Orange and Baidu are not working on this now, the plan is also to incorporate more advertising into the browser.

Although for now this deal is focused on what Orange is doing in developing markets, it does not rule out the possibility of extending the service into what it does in Europe. “We haven’t looked yet at this but it’s a good question for the future,” Blondet said. “What we do first in Africa and the Middle East is used sometimes in countries like Romania.”