You may have thought you’d seen every permutation of the video-sharing app, given the glut of new startups scrambling to become the “Instagram of Video,” or some derivation thereof. There’s Viddy, Socialcam, Round, Threadlife, Klip, Tout, ooVoo, Frameblast and if you wait a day, there will probably be a few more.

As Peter Csathy wrote recently, mobile video does indeed present a huge market opportunity, but it’s one that few (if any) startups have gotten right, and it’s a much harder nut to crack than many seem to realize. Streamweaver, a Nashville-based startup that launched back in September, hopes to stand out from the crowd by making the whole mobile video experience more social and collaborative. For Streamweaver, that means allowing friends to not only record mobile video simultaneously along or with friends, but view recorded content in a single, split-screen video as well.

The iOS app enables users to connect with friends, invite them to record along with you and view their status while recording. Thanks to its making sharing videos pretty damn easy and the ability to stitch different video streams to produce multi-dimensional story-telling, Streamweaver has caught the eyes of investors. Today, the startup is announcing that it has raised $1.3 million in series A financing, led by former Facebook Privacy Officer, Chris Kelly.

New investors INCITE Co-Investment Fund and the startup’s previous investors, Tennessee Community Ventures and Mountain Group Capital also contributed to the financing. As a result of the round, Kelly will be joining Streamweaver’s board of directors, where he sits alongside Eric Satz of Tennessee Community Ventures, Byron Smith of Mountain Group Capital and Panopto CTO Eric Burns.

Kelly, who joined Facebook in September 2005 when the social network had just about 25 employees, isn’t a complete stranger to digital video. After leaving Facebook in 2010, Kelly began investing in startups, adding Streamweaver to his recent investment in digital distribution service, GoDigital, and has produced several documentaries.

When asked about his investment in Streamweaver, Kelly said that he was attracted to the social dimension that the startup is bringing to mobile video. “As mobile users, we all love to share content and connect with others on the go … and I’ve seen a lot of social startups,” he said, “but Streamweaver is making a difference in how we collaborate with each other and collectively create interactive content.” 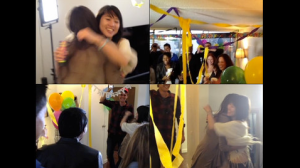 Thanks to the smartphone tech that’s now ubiquitous, capturing videos is as easy as tapping a button, but Streamweaver CEO Erik Carlson thinks that the social element has been limited to sharing. In light of this, social recording is beginning to take off, as there’s a lot of room left to make the act of capturing video on the go more enjoyable — and interactive. Simultaneous recording and split-screen viewing is a great start.

While Streamweaver’s approach is reminiscent of social video platform, Vyclone, but instead of creating a single video product that’s a mashup of different recordings, Streamweaver allows up to four people to record simultaneously, syncing that into one, split-screen clip. Users don’t have to be in the same place when recording and they don’t have to start recording at the same time — although their one-minute recordings do have to overlap at some point for the app to show the streams together in split-screen.

Once a user starts recording a video (presumably of a cat), they can send invitations to their friends to join them. Those other cat lovers will get a push notification, can then open Streamweaver and view which users have joined and see who’s recording at the same time. The app then uploads the finished product to Streamweaver’s servers before allowing users to view their videos in split-screen and share to their social network of choice, or send via email or SMS.