Activism platform Causes has just acquired political advocacy startup Votizen. With Causes’ massive 186 million-strong user base and Votizen’s tools, together they’ll break down barriers to civic engagement to allow anyone to influence elections. Negotiated by mutual investor Sean Parker, the deal gives people a way to turn out votes for candidates who support the Causes they’re passionate about.

I recently caught wind of Causes buying Votizen through my sources, and leaders of the two companies agreed to be interviewed about the acquisition which will be formally announced later today. The purchase price was undisclosed. [Update 10:50am PST 1/10/13: Votizen has since published a Facebook note confirming the acquisition. It details that Votizen’s site has now been shut down and all records of personal data will be destroyed, though former users may still get email alerts.]

Two Approaches To The Same Vision 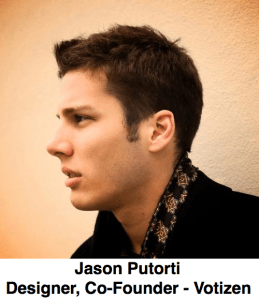 Founded by Sean Parker and Joe Green, Causes launched as a Facebook app in 2007 to apply word of mouth at the scale of social networking to make a social impact. Since then it’s registered 186 million users who’ve donated more than $50 million to 60,000 non-profits. They’ve also changed laws, started new non-profits, organized service trips and more.

Along the way, Causes became interested in Jason Putorti. He was a lauded designer at Mint prior to its acquisition by Intuit in 2009. Afterwards, Causes tried to hire him, but he started Votizen instead. “I wanted to go after the policy space immediately, and Causes wasn’t there yet,” Putorti tells me.

Votizen lets people sign in with Facebook or Twitter and see which of their friends are registered vote. You choose a candidate you support, and Votizen tells you which friends are eligible to vote and you should remind to turn out. It also creates a profile for you with your verified voter file pulled from public records. This shows candidates you’re a serious participant in democracy.

A year later Votizen raised $1.25 million in initial funding in 2010 from an all-star set of investors, including 500 Startups, Felicis Ventures, SV Angel, Shervin Pishevar, and Keith Rabois. Founders Fund added a big chunk and partner Sean Parker joined the Votizen board. Eventually Votizen would bring in another $750,000 convertible note from Parker, Ashton Kutcher, and some other celebrities.

Under the leadership of Putorti and co-founder David Binetti, Votizen succeeded in building a database of over 200 million voters and rallied over 5,000 campaigns. Still, outside of the election cycle it was tough to acquire new users. Votizen had enormous potential to convert excitement for a cause into political impact, but it needed more distribution. 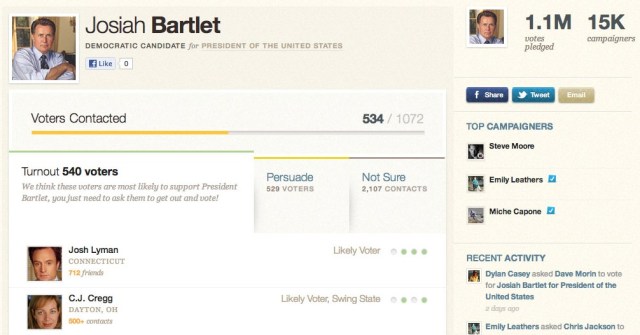 Causes, meanwhile, had excelled at inspiring lightweight “clicktivism” but needed a way to harness momentum for a campaign to create a sizable dent in problems like education, conservation, and human rights. According to AppData, this month 10 million people were active on Causes, meaning there’s plenty of others to reactivate.

In the years since it first approached Putorti, Causes promoted Matt Mahan, who tells me the company “learned issue activism is a stepping stone to political engagement. There are certain people involved in political campaigns, but there’s a lot of people who get involved in individual issues [like the ones Causes hosts]. We wanted to show them the natural end result is taking some kind of political action.”

Through Parker, Causes began acquisition talks with Votizen. Mahan explains, “we had 65 million actions on Causes last year. If it had been connected to Votizen, their impact would have been 10X.” Plus, Mahan believes that with so many fascinating startups to work at, it would have been hard to recruit a team as strong as Votizen’s.

Binetti tells me joining forces made perfect sense. “This deal gives us the potential to reach every voter in America and move every voter in America. That’s a huge opportunity, and one we weren’t going to pass up.” And while both companies strive to make a social impact, they’re definitely for-profit ventures hoping to earn revenue by restructuring activism.

The acquisition aligns disparate strengths to achieve a common goal. Votizen could reengage Causes’ latent user base by getting them to pledge their votes to candidates who support the Causes they donate to and volunteer for.

Now more than ever, people need to feel like they have a voice in their government. Mahan says “in offline world I think democracy is struggling. There’s cynicism, declining participation rates, and a lack of belief that my individual actions matter. Really, we’re just at the doorstep of a new era of civic engagement online. We want to be the technology platform that services that.”

The whole Votizen team will immediately begin work at the Causes office in San Francisco. It will be integrating their products to create a bridge between backing a Cause and accomplishing that goal by voting for politicians who’ll enact legislation on its behalf.

For example, Causes users took three million actions in support of The Sandy Hook “Global Sympathy Card” and “Sandy Hook Moment of Silence. Mahan says that “With the addition of Votizen’s voter file integration those three million actions will carry a lot more weight in Washington, D.C. and statehouses around the country.” That’s because the voter file shows politicians “this isn’t just some signature. This is a real voter in their district that’s going to vote them up or down” explains Binetti.

The question now is whether, together, Causes and Votizen can make activism appealing enough to leapfrog exhaustion with the political process. 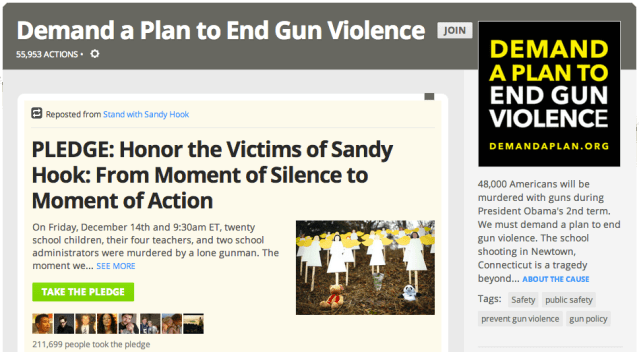 The Power Is Yours

In several of his public talks, Sean Parker has laid out his position that an empowered network of people can have a huge influence, and in the case of politics wrestle back that influence from the people with the deepest pockets. At the Techonomy conference in November 2011, Parker said:

What I’ve been exploring with two portfolio companies, Votizen and Causes, and in fact our very tagline at Causes is ‘individual empowerment’, is…trying to leverage social capital to effect some kind of social change, whether it’s in electoral politics, or activism, or advocacy, or raising money. What’s really interesting is aggregating power. Ultimately the purpose of money in politics is as a proxy for votes. If you can find a more efficient way to aggregate power in the form of voting, you can remove money from the system.

The acquisition unites two of Parker’s companies and strengthens his portfolio of businesses aiming to democratize democracy, which also includes campaign organizing tool NationBuilder. Parker tells me “By adding Votizen’s voter file integration to the Causes platform, Causes expands upon its existing capabilities for tying online activism to real-world change. Our two teams are very compatible and the combination will create a significantly stronger bench of technical and design talent, e.g. the addition of Jason Putorti to our design team.”

Together, Causes and Votizen could help us find problems we’re passionate about, get us involved, and make sure our votes deliver solutions…if they can disrupt our apathy. And there’s plenty of work to be done, both in the United States and abroad. Binetti concludes “Democracy is a growth business. There’s only one direction this is heading — that’s more of it.” 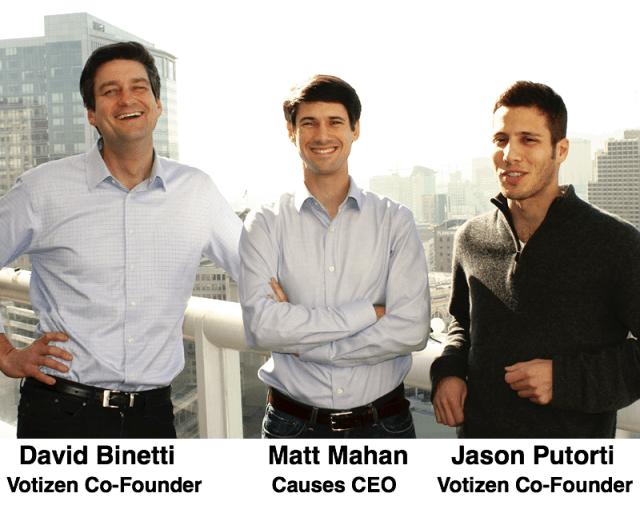