General Electric built what is today a $219 billion multinational industrial behemoth by continuously investing in innovation, technology, and computing. As the maker of airplane engines, trains, power plant turbines and medical equipment, GE’s business generally falls outside the virtual walls of the consumer web. However, as the New York Times reports, GE has recently renewed its commitment to investing in innovation, particularly as it places its bet on the “industrial Internet” in an effort to bring some digital magic to industry.

According to the NYT, GE has established a new, giant software center in the Bay Area and is already employing 250 engineers, developers, and computer scientists, with plans to hire 150 more and invest $1 billion in the center by 2015. Beyond embracing the “Internet of Everything” and smarter industry, GE also has its eyes on healthcare and the revolution that’s waiting in the wings.

With digital health data proliferating, wearable health-tracking devices (and the sensors underneath) maturing and becoming cheaper to produce — along with improvements in remote diagnosis, healthcare transparency and a booming app economy, the intersection of health and technology is heating up. As Rock Health’s year-end report shows, in spite of a sluggish IPO market and wary investors, the digital health space grew exponentially in 2012, as health startups “saw 45 percent more investment and were part of 56 percent more deals compared to the year prior, with total capital invested growing from $968 million to $1.4 billion.”

Meanwhile, on the back of its enormous healthcare business, GE launched Healthymagination in 2009 as a vehicle to invest in healthtech innovations that aim to deliver higher-quality (and more affordable healthcare), improve access to health info and more. The company committed a whopping $6 billion to the initiative to make this happen.

As part of this, GE is now looking to expand its support of health innovation to early-stage companies. This morning GE partnered with StartUp Health — the academy, accelerator and resource for healthtech entrepreneurs — to create a three-year program designed to help accelerate the growth of consumer health startups. Part of its Healthymagination initiative, the program intends to “not just support a great idea,” StartUp Health co-founder Unity Stokes tells us, “but to scale these businesses and develop significant transformative consumer health innovations.”

Focusing primarily on increasing equity value and scaling operations, the program will incubate up to 10 companies, which participate in the program for free, in exchange for 2 to 10 percent equity ownership by GE and StartUp Health’s Innovation fund. While it does not offer a guarantee of any capital investment in the companies, the program will have a “significant focus” on customer development and ensuring that its startups have access to investors, VCs, strategic partners and other investment channels.

Although the companies are still solidifying the model, the plan is for each startup to be partnered with a GE executive that matches their business model and service offering. The mentor/partner, along with StartUp Health, will help them connect and partner with other experts and resources within GE, be they tech experts, healthcare experts, product gurus, and so on.

The goal is to leverage the entire GE infrastructure to build and scale transformative consumer health innovations and to take a tailored and customized approach to accelerating startup growth. The program will be open to any consumer health businesses — StartUp Health companies can apply, as well — with a focus on companies concentrating on improving quality of care and more affordable healthcare for consumers.

To add that Silicon Valley, startuppy stamp to the program, GE also announced today that long-time Kleiner Perkins Partner Risa Stack, PhD, has been appointed General Manager of the company’s Emerging Health Innovations. She will report to Healthymagination CEO Sue Siegel. The move makes a lot of sense considering that Stack has served on the advisory board for healthymagination for the last two years and spent her nine years at Kleiner in the firm’s life sciences group, where she focused on precision medicine, platform technologies and therapeutics. And, as Xconomy points out, this makes Stack the third Silicon Valley VC to join healthymagination in recent months.

GE and StartUp Health’s new program follows on the heels of a similar partnership between Nike and TechStars. The apparel giant and the national startup accelerator teamed up to create the Nike+ Accelerator program in December, designed to cultivate entrepreneurial talent to help scale (and improve) Nike’s growing mobile health ecosystem, leveraging its increasingly popular mobile health and fitness products like FuelBand and Nike+ Running.

When multinational giants like Nike and GE begin throwing their weight behind early-stage health companies, jumping on the Accelerator Bandwagon, it’s a clear indication of the enormous potential for the digital health space. And GE seems committed to creating an accelerator that produces real, innovative businesses and products — not just an Instagram for Patients.

As to the program, applications are being accepted beginning today (January 8th), which can be found here, and companies have 30 days to apply (deadline is February 8th), with selections taking place in March before the program kicks off in April. 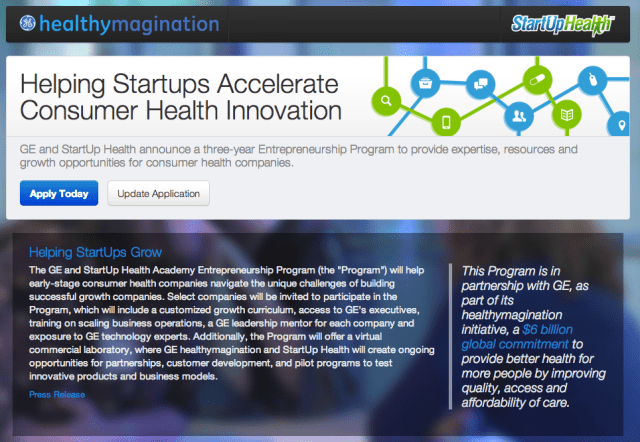