Our cars have become increasingly connected, but building apps for them has generally involved small private betas and a lot of hand-holding from car manufacturers. The first manufacturer to open up their cars to developers is Ford, which is announcing its open mobile app developer program for iOS and Android apps at CES today.

Developers will be able to use Ford’s new SDK to tap into a car’s entertainment systems to enable two-way communication between the apps and the car. As Julius Marchwicki, Ford’s program manager for SYNC AppLink, told me earlier today, this includes the ability to use Ford’s SYNC system to send voice commands to the app, give feedback through the car’s text-to-speech engine, use the car’s button controls and menuing system, and provide API access to the display.

Until now, access to the AppLink API, which is available in more than 1 million vehicles and which will launch globally this year, was only available for a small number of companies. While Ford held a number of developer events (including one at our own TechCrunch Disrupt Hackathon), access to the API remained limited. In a way, this obviously wasn’t a surprise, given the liability considerations that govern a lot of what the car industry can and can’t do (just imagine an app that dials your volume up to 11 and causes you to crash).

Because of this, a developer will have to submit an app to Ford for review by its engineers to “ensure it works properly and is suitable for use in the vehicle.” Once it’s been approved, developers get a distribution license so the app can be submitted to the relevant app stores and talk to the car.

As Marchwicki told me, most of the safety concerns are mitigated by the fact that AppLink runs in a sandbox on SYNC, which itself is a sandbox, too. He did note, however, that Ford will refuse apps that, for example, focus on video or are otherwise visually intensive (long text, photos, etc.). Games, too, he said, will not be allowed to connect to AppLink.

Before submitting their apps, developers can also get support from Ford and through online discussion forums on developers.ford.com. Throughout the private beta phase, Marchwicki said his team updated its documentation, especially the Getting Started Guide, to decrease the time it took new developers to bootstrap their apps. Ford is also working with Michigan-based development shop jacAPPS to provide development and technical support for developers who need some help building their AppLink apps.

“Since launching AppLink, we’ve worked with developers ranging from a two-man startup at Roximity to large organizations like National Public Radio and Major League Baseball,” said Marchwicki in a statement today. “The experience we gained from these projects as well as supporting hackathons at TechCrunch Disrupt and Facebook has helped us refine the development and testing process.” 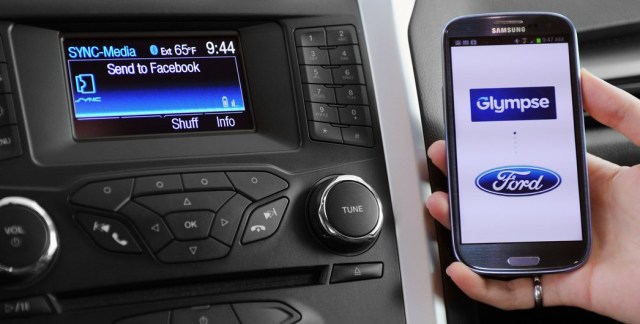 Over the last few months, Ford also worked with a number of developers to bring their apps to AppLink ahead of the full launch of the developer program. Among the apps launching with AppLink support today are news apps like the Wall Street Journal, USA Today and Kaliki, as well as music apps from Amazon for access to its Cloud Player, Aha Radio, Greater Media and Rhapsody. Navigation apps Glympse and BeCouply, the winner of the last Ford AppLink Developer Challenge at our Disrupt Hackathon, also enabled their AppLink support today.