The good news keeps rolling in for BlueStacks, the startup best known for making technology that enables one and all to download and use Android applications on their desktop PCs — and more recently, their Macs. In anticipation of CES, the company announced today that it has secured a global distribution deal with Chinese PC maker, Lenovo.

Lenovo, which some say recently surpassed HP as the largest maker of PCs, now hawks ultrabooks, convertibles and desktops and has been aggressively integrating Windows 8 into its product lines and pushing touch technology upgrades into its laptops. With its new distribution agreement with BlueStacks, Lenovo will begin preloading BlueStacks’ software and service in its Idea-branded PCs — Lenovo’s consumer line, which represents about 40 million units.

The deal, which has been slowly formulated over the last six months, is the latest in a series of similar distribution agreements for BlueStacks, which now includes Asus, MSI and AMD. The most recent of which was its partnership with AMD, secured in September, which enabled the chipmaker to optimize Android apps for AMD-powered Windows 7 and Windows 8 PCs with the launch of its “AppZone.”

All told, BlueStacks’ agreements with Asus, MSI, AMD and Lenovo means that more than 100 million PCs will be preloaded with its App Player software in 2013. This helps give context to the startup’s recent announcement that it had exceeded five million organic installs from its website, something it was able to do in under eight months.

If it wasn’t clear in AMD, Qualcomm and Citrix’s collective investment in BlueStacks (the company has raised a total of $15 million in outside funding from these companies as well as Andreessen Horowitz and Ignition Ventures), some of the largest OEMs out there are clearly eager to tap into the enormous potential inherent to transforming Windows devices into a platform to run mobile apps.

When it comes to PCs, Windows represents a colossal market, but one that has (as of yet) has failed to offer the same access to native apps compared to Google and Apple. BlueStacks’ technology allows OEMs to offer Android apps to its PC users, while enabling developers to touch a whole new audience (of Windows users) without spending months creating a whole new Windows-facing product.

While the company isn’t disclosing the terms of the deal, it’s likely that OEMs are paying for the ability to put BlueStacks’ tech on their machines, seeing as that will give them access to another revenue stream via pay-per-install.

For Lenovo users, this means that they will be able to enjoy the same apps on the PC that they’re already using on their smartphone, with BlueStacks linking their smartphones to the PC via the cloud, enabling them to sync their apps, data and SMSes between their phones and their PCs. When they boot up an Idea PC for the first time, they’ll see Lenovo App Player first thing, along with other content like music and photos. At CES 2013, BlueStacks will be showcasing the latest version of the App Player designed and optimized for Windows 8 Ultrabooks, laptops and tablets.

BlueStacks will also be running all mobile apps on PCs for Lenovo, and the company is set to to launch a mobile app that Lenovo plans to preload onto its phones. This will connect Lenovo PCs to peoples’ Android devices, presumably incentivizing those who have a Lenovo PC to buy a Lenovo phone and sync their apps — and vice versa.

For BlueStacks, these partnerships are all about expanding its footprint and helping to bring Android apps to an enormous audience of Windows users. Of course, it’s not only about Windows users. The company is also in talks with several large TV and phone manufacturers, as it’s looking to integrate its App Player into these next-gen, connected systems.

“In two years, there will be no ‘mobile’ apps as opposed to ‘PC’ applications,” says BlueStacks CEO, Rosen Sharma. “We expect Apple will gel iOS and OSX this year, and we are working on the same for Google.”

Of course, that being said, BlueStacks isn’t leaving Mac users out of the equation. In late December, the startup launched its App Player for Mac in beta, offering those 750,000 Android apps on the market to Mac users. For BlueStacks, it seems clear that the domino effect is underway. Expect to see the connected TV makers signing on next. 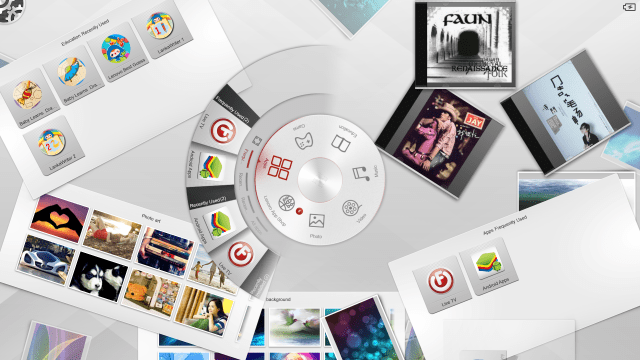