Attention dumbphones, point-and-shoot cameras and music players: sorry to tell you this, but it looks like your days may be numbered. According to a new survey out from Accenture (embedded below and released to coincide with the CES show), consumers are moving away from buying “single-use” devices and opting instead for those that offer the ability to do many things, with smartphones (at 41% of respondents), PCs (36%), HDTVs (33%) and tablets (23%) topping the list of items consumers are most likely to buy in 2013, as gadget spending is projected to reach $1.1 trillion.

It’s a familiar story to those of us who write about the tech industry and trends in smartphones and tablets, but Accenture’s research, covering 11,000 consumers worldwide, shows that this is more than just the musings of analysts, and a global trend fuelled by the rise of superphones and tablets.

The survey, from September 2012, was based around consumer responses to some 16 different types of consumer electronics categories — from tablets and smartphones and connected TVs through to cameras, basic TVs and e-readers.

In a telling table of increasing versus decreasing ownership, it’s clear that over the last four years, consumers have been gravitating much more towards devices that let them email and watch TV, or take pictures and post them instantly to social networks.

There are a few exceptions. For example, e-readers, GPS devices and Blu-Ray players are still appearing in the ‘increasing usage’ category, albeit as smaller players compared to tablets, smartphones and PCs. And PCs are actually a little bumpy in consumer sentiment, but they are by far the biggest category — with basic mobile phones still a close second — and so even small declines will continue to keep them the most important consumer electronics device for a while to come.

This is how the list of “increasing purchases” looks right now: 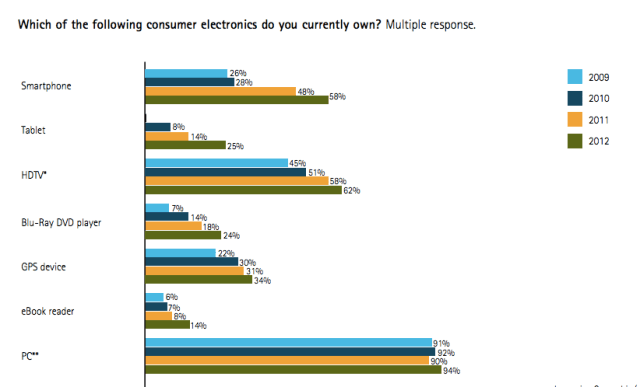 Meanwhile the decreasing category is perhaps a lesson in what features we will increasingly start to see in the multi-use devices. Indeed, the increasing power of smartphones and the ever-growing prevalence of apps makes functions like cameras, music players, and health/fitness tools into add-on, rather than central purpose, features. And with broadband speed improvements and more content moving digital, tablets and PCs are becoming the screens of choice for video. 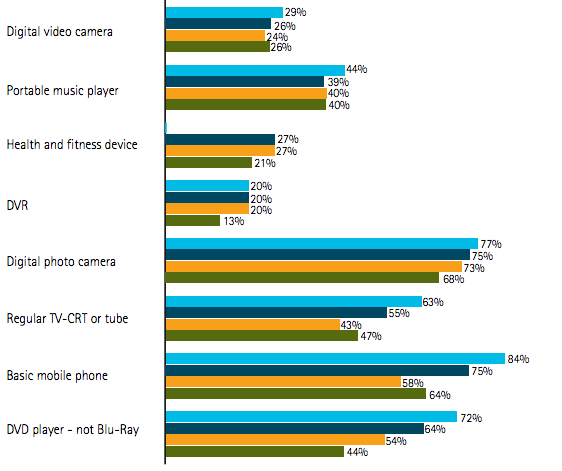 Among some of the other interesting conclusions in this report are some lateral looks at how ownership of multi-purpose devices is helping to render other devices as obsolete. I think you can read these two ways, though. In the case of tablets, for example, it looks like it has a bigger impact on usage of e-readers and DVD players than it does on PCs and smartphones. That points to some of those features being replicated on the tablet, but also that those using multipurpose devices are going to be the people who will gravitate to other multipurpose devices. In other words, there is still an audience for well-made products that do just what they say they will, and nothing more. 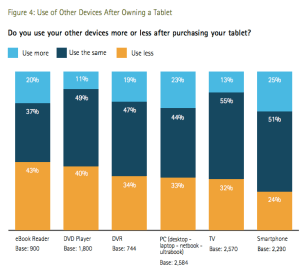 Another response that caught my eye: awareness of operating systems. This is one of those old chestnuts that some have claimed consumers don’t care about, but these numbers seem to tell a very different story: 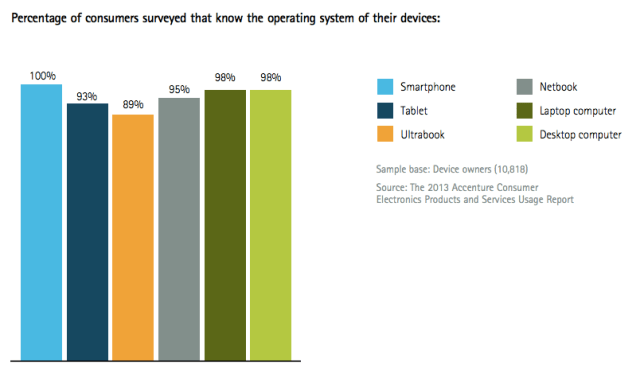 That’s a powerful table combined with the fact around half of respondents also seem to say that they’d rather have all their devices using the same operating system.

The Accenture survey doesn’t single out any single brands among Apple, Samsung, Google, Sony, LG, Microsoft, Nokia or others that might be leading the pack with consumer sentiment.

That kind of lock-in is potentially music to many hardware makers’ ears, but it’s a road they need to tread carefully. Just as many want the opposite, meaning they can alienate just as many users as they can win over with a strategy that makes it easier or harder to run several devices in tandem (Apple: take note).