When his grandmother was no longer able to live safely at home, Tal Ziv and his relatives set out to help her find the best senior care facility — better known as assisted living communities. It’s an experience many families face at some point, and it’s not always an easy one. What’s more, the stakes are high; we want loved ones to be at home in a great environment, but there’s also the fact that the average cost of senior living communities is $80K. Assisted living facilities are expensive, and, while they’re all very different, it can be tough to distinguish without visiting each and every one.

So, wanting to find the best community for his grandmother, he began researching the best options in his area, only to find that the majority of them lacked a substantial presence online. So Ziv and former Microsoftie and veteran engineer Mike Cirello founded Silver Living to digitize the process and become what the co-founders hope will be a “consumer reports for senior living communities.”

Launched in December, and currently covering New York, New Jersey and Connecticut (with plans to expand in 2013), the startup offers extensive research coupled with high quality, honest photography on assisted living communities. The research is 100 percent free to use.

For Ziv, an “honest” portrayal is the key to his business’ value proposition. “We share the good, the bad and the ugly,” he says, and we “dig deep into living experience.” The team sends mystery shoppers to the facilities for multiple tours, who report back on their findings, along with paying photographers to offer a realistic portrayal of what accommodations and facilities look like. Communities aren’t given editorial control over any of Silver Living’s content — either text or images — but they try to get after the essence of what that facility is best for.

So, the community don’t shy away from giving low scores to a particular facility, but the idea is to find their strong points. Maybe the facility doesn’t have the best accommodations, but it’s passable and it’s affordable. Silver Living offers its own scoring system — the traditional “our of five stars” approach — which are compiled based a variety of factors, including inspection reports and complaint reports. 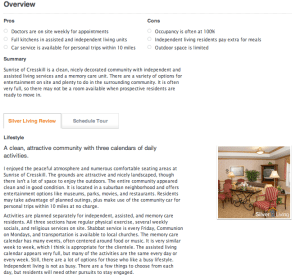 For each facility, the startup applies, the startup sends the state a Freedom of Information request, to get inspection and complaint reports. It often takes six months, but once they get the reams of files, Silver Living analyzes how inspection deficiencies they have relative to their peers, for example, along with relative cost for each amenity, the cost for different levels of medications, levels of care, on top of the conclusions of their mystery shoppers.

On top of that, Silver Living actually interviews residents in each community, asking them what do they think, what they like or don’t like, which is then factored into the score. That’s the difference between Silver Living being a Yelp for assisted living and the Consumer Reports — it’s not just someone off the street, the reviews come from people who have actually lived there.

Of course, while transparency, insight and visibility are becoming more valuable commodities in the digital age — and Silver Lining is trying to bring this collective to assisted and independent living communities, it can be a delicate balance. While working to reveal the good, bad and the ugly, the startup also relies on these facilities as its primary source of revenue.

What’s more, currently you won’t find any reviews on Silver Living with less than 2.5 stars. Why? Ziv says that Silver Lining has, thus far, selected which facilities it chooses to work with and that they must be run by reputable operators and have at least one hundred beds in its facility. It’s partly an editorial decision, the co-founder says, in that it’s the way they’re choosing to operate at present — it’s not just a Yelp for every mom and pop shop out there. Up to this point, the quality of facilities have been good enough that none of them have warranted “one star” yet. However, he expects that, as the company expands and reviews more communities, volume will inevitably bring lower ratings.

For now, regardless of whether or not some are in Each of them regardless of how shoddy they are, they’re still good for someone. For some, location or geographic proximity might matter more, or price, and while one facility may be rated lower because it doesn’t include care for memory issues, some families might have a loved one that doesn’t require that particular kind of care.

Silver Living is currently working with three of the four largest assisted living chains in the industry and has agreements with these chains — as well as with other facilities — such that it’s paid when someone actually moves into the community. The startup receives a fee once someone commits, and because these are annual fees in the thousands of dollars, the amount received is higher than other lead-gen businesses, like say, Kayak.

The startup has also raised a round of seed funding (under $500K) from Dave McClure and 500 Startups, Facebook’s Bubba Murarka, Oakview Group (Henry Parry-Okeden) and Slo Seed Ventures’ James Glinn. Going forward, Ziv says that the startup will begin looking to raise its series A in the coming months and will be looking to expand to the West Coast, beginning with LA.

It might not seem like it, but Silver Living is going after a big market. All told, long-term care is a $200B industry, Ziv tells us, and assisted living is a $48B segment of that total. Turnover is high at assisted living facilities because, unfortunately, residents pass away or move on to other facilities, to nursing homes and so on. To stay in business, these facilities need to fill their rooms, and Silver Living wants to help them do that, while giving families and those in need of care an easy (and transparent) way to find the community that makes sense for them.

And when it comes to photos, the startup isn’t messing around — it’s almost as if Silver Living is trying to be Airbnb in this regard. Some reviews include 300 to 400 photos. The team is going after breadth, hoping to allow people to easily sort the wheat from the chafe without having to go on a tour to do that. It’s a great idea, now it just has to find its legs. 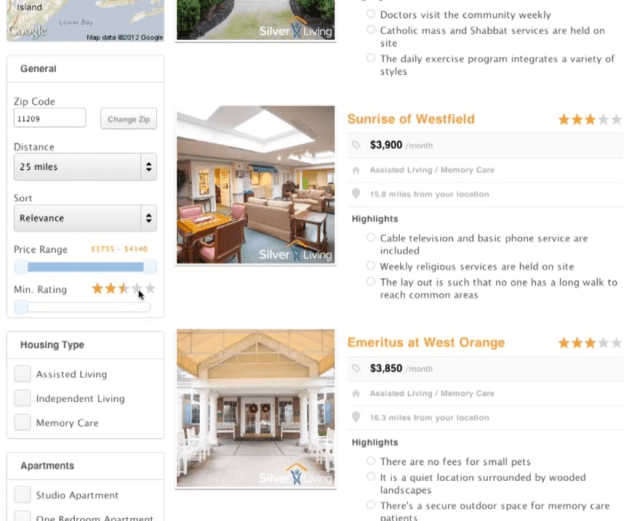