Regardless of what you think about digital dating sites, they encourage us to close our computers and get out there and meet new people. In short, they bring people together. The problem is, of course, that there are infinite variations on social and mobile dating, from compatibility engines and social, Facebook-based platforms to game-ified bracelets and live video dating. Then there are the quasi-dating, people-meeting sites like Grouper. Some work, most don’t.

A new LA-based startup backed by IAC — the Barry Diller-led digital media giant that also happens to own dating veteran Match.com — thinks it has a shot to catch your attention amidst the noise by throwing out the bells and whistles and keeping it simple. Launched in October, Tinder is an iOS app that focuses on the social and mobile aspects of dating, while attempting to get rid of the creepy factor.

Co-founders Sean Rad, Justin Mateen, Jonathan Badeen, and Christopher Gulczynski tell us that, based on their experience, most dating sites offer too much rejection. They focus heavily on profiles (and photos), many of which are fake, don’t tell you much about your prospective match and set the table for tons of message spam. Guys tend to be over-eager, sending messages broadly to 200 ladies, and generally speaking only a couple will respond. It’s a waiting game with plenty of rejection, which makes for a bad user experience. And for women, it can be pretty darn creepy, if not overwhelming. As a result, few dating sites/apps have really taken off, while the largest players in the dating world — incumbents like Match.com and OkCupid — continue to hold the most mindshare among daters.

These incumbents can provide better matches and more structure, but they often require you to fill out a bunch of forms and tend to cater to a slightly older crowd. Having learned from Match.com (also part of IAC), the Tinder founders decided to build a dating experience for a younger demographic — the mobile generation. 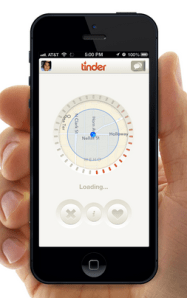 Initially, Tinder piloted its dating experience on a few college campuses, where it’s been taking off, serving over one million matches, with users having made 35 million profile ratings in less than two months. The co-founders say that they’re continuing to listen to users, tweaking the experience based on feedback and, with traction building, they’ll be looking to build off their seed funding from IAC and raise a series A in the coming months.

CEO Sean Rad says that he thinks Tinder is resonating with college students because the app has taken a more subtle approach to dating, as it doesn’t require users to “put themselves out there” to the same degree other apps require. In terms of how it works: Tinder is location-enabled, in that it shows you other people who nearby it thinks you might like to know, connecting you if you’re interested. The experience is anonymous until someone you like returns your interest, as you can anonymously “like” the person or skip to the next suggestion.

Unlike some other apps, Tinder doesn’t track location in the background, meaning that it doesn’t eat up battery life. When a user opens the app, Tinder captures their last known location, presenting it to other users with limited details — in the “worst-case” scenario, Rad says, it might say “Rip is <5 miles away." Fairly standard among mobile dating apps.

Tinder casts a 50 miles net around its users, taking users within that radius and giving them a rating based on their relevance to you. It displays people in order based on this score, so the person with the highest potential match is at the top. The score is based on shared friends (via Facebook), interests and networks. In turn, the more one uses Tinder, the more data it has on your tastes and preferences, tweaking its score based on those implicit signals it captures from user behavior.

There are a host of dating platforms built on top of Facebook data (and in some cases other others), like TheDatable, TheComplete.Me, Circl.es, and Yoke to name a few. While Tinder makes Facebook log-in mandatory and uses the social network's profiles to establish a baseline of trust and identity, the CEO says that the app doesn't share anything back to Facebook and doesn't post to Walls or Timelines. 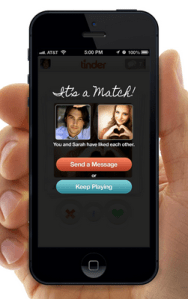 The initial experience is somewhat reminiscent of the old Hot or Not model in that users check out some basic profile data and photos based on the list of Tinder's nearby matches. If what you see is appealing, you "like" them, if not, you pass. And to that point, another upside for Tinder is that users can't message each other unless they've both explicitly stated interest in one another.

The idea is that, once users have stated interest in each other, they can message the other person via chat, add each other on Facebook, leading to a meeting in person. At least that’s the idea. Based on location and shared interests, Tinder attempts to prequalify the relationship, Rad says, and Facebook authentication reduces a bit of the creepiness. The founders are trying to put more emphasis on one’s social circle than on interests, likely why the app is finding adopters on college campuses and among the recently graduated.

Going forward, the CEO says, the team wants to make it easier for users to meet by allowing them to throw a party in an area where you (and your friends) have more matches, for example, to create a more comfortable, “safer” and larger environment where they can mingle.

One thing working against Tinder is that, even as its user base grows, it doesn’t yet have a business model — though it’s still early in the game. The co-founders did say that they are confident monetization won’t come in the form of ads, instead, they’ll likely turn to in-app purchases. If you want to stand out from the crowd, you might be able to shell out a couple bucks to be able to send your matches a virtual flower or a dozen roses, for example. While virtual gifts may not represent a goldmine, it’s an appealing idea and one that’s proven fairly successful on Facebook.

Next, the co-founders plan to continue improving the app’s algorithms and, judging by some early user reviews, Tinder might want to consider establishing some sort of age range so that 30-year-old users aren’t seeing a bunch of 16-year-old matches, as well as build up infrastructure to prevent crashing. 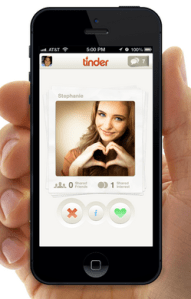 The latest version of the app takes care of some of the glitches and improves the visual experience, allowing users to see up to four Facebook photos during the initial Hot or Not and flirting stage. But it would be good to let users archive old messages and go back through people they’ve already rated.

Tinder may not blow you away with its innovation or shock with first-mover appeal, but by keeping things simple and social, improving algorithms, reducing creepiness and targeting young daters, the app very well could be hitting the right note and an attractive niche. Considering how fast SnapChat has taken off among younger generations, there’s a huge audience of excitable, mobile and social flirters out there. Two months from launch, Tinder has been able to maintain 65 percent daily active users (and 80 percent when a user is matched) and the 35 million profile ratings show it’s been able to capitalize (at least initially) on that viral hook.

There’s a lot of competition, but Tinder is creating an addicting experience that could stand to find big adoption on college campuses.