As a long-time runner and a recent recipient of a Nike+ SportWatch GPS I can safely say I’ve been bitten by the exercise data bug. The satisfaction of uploading your latest round of physical exertion and transforming it into digital bits and bytes that can be analysed and compared against past performance is pretty darn cool. But the Nike+ SportWatch is far from perfect. The biggest issue I have encountered so far is patchy and/or sluggish GPS linking (a problem flagged up by my TC colleague John Biggs in his 2011 review).

If the GPS sensor takes its time to connect it keeps you grounded in your running shoes waiting for the digital hook-up in the sky to get on with it. And if the connection fails entirely (which has happened to me on a run in a rural part of Wales), far from motivating you to get moving the SportWatch makes you feel there’s no point in working out since your effort will go unrecorded and therefore wasted (this is not, I should add, an attitude I used to have before owning the watch — so it’s a perfect example of the double-edged nature of technology).

Enter Leikr: a sports watch that wants to do things better — including by making the GPS link process faster, thanks to “a snapping fast custom made GPS system” which includes downloading GPS almanac data to the watch to help it “fix on the satellites faster” and a custom GPS antenna that is “fine tuned” for Leikr, rather than using a standard ceramic GPS antenna module.

I can’t testify to its speed, since I haven’t had a chance to test it, but speedy GPS linking is one of the advantages being touted as part of the Leikr Kickstarter pitch. Other sports watch annoyances the team behind Leikr want to overcome include overly bulky devices, irritatingly counterintuitive interfaces, and small, non-colour screens.  They are undoubtedly aiming for the pro, endurance end of the sports watch market, rather than the Fitbit/Jawbone UP casual activity tracker masses but don’t let that put you off. You are serious about your running right?

“During our training we have tried different GPS watches and we have never been completely satisfied with them: too bulky, too difficult to operate, slow in getting the GPS signal, small screens and little to show:  honestly quite boring stuff,” the team writes. “We were looking for the perfect device to support our training and we could not find it. Last year we decided to take the chance and realize our long wanted dream of a training GPS watch that every athlete would desire.” 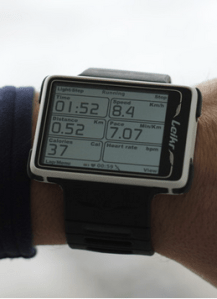 Leikr — which incidentally means “game, sport, play” in old Nordic (the company being founded in Denmark) — has a two inch colour display (with a resolution of 320×240 pixels) — meaning there’s enough space on screen to display multiple data points simultaneously, such as time, speed, distance, calories, heart rate etc, or to show a map view that allows you to track your position as you run and see where the route is taking you. While the face of the watch is much larger than the average sports watch display, the thickness has been squeezed to 10.65mm to keep the overall bulk down. Gorilla Glass toughens it up, weight is around 55 grams, and run data syncs automatically over Wi-Fi when you’re back at your desk. There’s 8GB of on board storage for your maps and runs, and a 500Mhz engine inside. Battery life is reportedly up to 6 hours of active (GPS) use — long enough for an average runner to complete a marathon and still have juice to spare.

Leikr’s maps are powered by OpenStreetMap, which the team claims is a first for this kind of gizmo (Nike+’s SportWatch GPS is powered by TomTom, for instance), while the watch integrates with social fitness tracker community Endomondo for analysing training, sharing and comparing with friends. The Leikr team isn’t just concerned with making the hardware though. On the software side, they will offer a portal where workouts and programs can be downloaded to the device — customised to your appropriate fitness level — and the team’s pitch talks about wanting to be there at every step of your training, from planning to executing to analysing.

So who’s building Leikr? No, it’s not Apple. But the core team does include some mobile expertise — specifically ex-Nokia talent, from Nokia’s now shuttered Copenhagen R&D lab, such as Lars Moeller, Director, R&D Management, who spent 12 years at Nokia R&D — bringing, in their words, “years of experience making the best in mobile devices” to the GPS watch space. The Leikr is Linux-based (the watch will be upgradeable via the Leikr portal as the software evolves) and also uses the (formerly Nokia owned) Qt application framework. “This solution allows us flexibility and reduced power consumption,” the team writes. “Our development team has years of experience developing on this framework.”

The Leikr Kickstarter goal is $250,000 — to bring the watch to the U.S. market initially. Currently the project has raised more than $23,500 with 29 days left to get funded. The first batch of 50 Leikrs offered at the lowest pledge rate to receive a watch ($149) has already sold out. 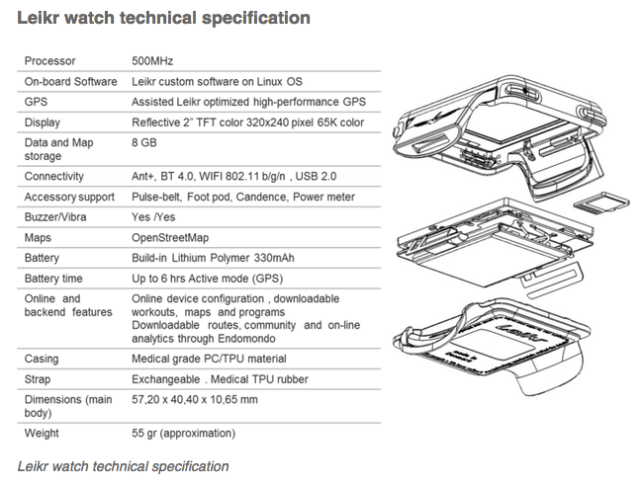