Same-day shipping became the big retailer craze this holiday season. Why? As the New York Times points out, retailers are living in fear of Amazon.com and trying to match what the online retailer offers.

The fear factor — Wal-Mart once had a trance on retail. Now it’s Amazon.com. But it’s not just retail that has begun to show deeper anxiety about Amazon. It’s the enterprise giants, too, that pay far more attention to the moves Amazon makes. Commerce came first, and now Amazon is prepping to have the same impact on big data and the software markets.

It’s why 2013 will be the big year for the retail and computing giant. It’s all coming together with its growing cloud infrastructure, voluminous data streams and content. It’s what Ray Wang of Constellation Research calls “matrix commerce.”

Wang argues that Amazon is not a commerce company at all. It’s a big data company that has developed a cloud infrastructure that is profitable and subsidizes its retail operations. It has the mobile devices and content that it can spread through a network of users who pay to get it.

Wang said this to me in an email:

It’s about dominating matrix commerce via big data. In matrix commerce, the channels from the network, the demand signals from big data, the supply chain from logistics, the payment technology from the interfaces, and the frictionless enablers from digital signatures, etc. These are the future.

Retailers face a market that once fed them high profit margins. Amazon competes on volume and low margins. That’s as true for its retail business as it is for its infrastructure offerings through Amazon Web Services (AWS).

Jeff Bezos reflected on the parallels when he took the stage at AWS re:Invent.

“Retail customers,” he said, “want cheap prices and fast delivery” and AWS customers want reliability and speed. “The effort that we put into those things will continue to pay dividends in the long term. It’s impossible to imagine that people would say: I love AWS, but I wish it were a little less reliable.” 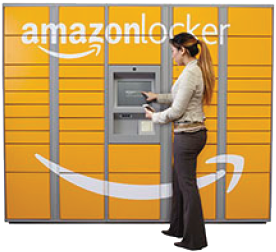 Just like they did in 2012, Amazon will keep doing new things in 2013. This past year the company continued its reinvestment in distribution centers. It continues to build warehouses near big cities like New York and San Francisco. It even started deploying electronic lockers in retail shops where shoppers can pick up items they purchased online.

AWS introduced two new big data services in 2012 in addition to Elastic Map Reduce, an online Hadoop engine for analytics that it has offered for the past three years. DyamoDB is the company’s NoSQL offering, which the company has had in deployment internally since 2007. It powers Amazon’s consumer site. RedShift is an online data warehouse that AWS launched at the re:Invent conference. AWS ties into corporate data centers; it can run mission-critical applications. It will continue to work with companies like SAP to run business software.

Amazon also sells the Kindle hardware at practically a loss. It does this so it can sell ebooks, a market that the company dominates. It has also used these devices to push into the publishing market.

One common element ties Amazon’s online retail, cloud services and foray into the tablet market: data. For Amazon, the hardware does not matter. The goal is not to make margins on selling fancy consumer hardware and expensive equipment. Through efficiency, Amazon can experiment in retail, publishing and its enterprise service offerings.

I still have my doubts, though. AWS is not infallible. Its repeated outages have given its competition plenty of room to differentiate against AWS. And low margins do not necessarily mean success. It impacts revenues and its overall stock price — factors that can’t be ignored.

Amazon is not a commerce company. It’s a big data company. And that’s what makes the difference in its success for the past year and the year ahead.

Same-day shipping is not going to help competitors. Studying Amazon is a better tactic. A lot can be learned in how it uses its own infrastructure to offer data services and the lowest prices in the business.