Modern Apple owes pretty much everything to the iMac. Yes, it was the iPod and later the iPhone and iPad that took the company to new, almost unimaginable heights. But as everyone knows, the company was at death’s door when Steve Jobs unveiled the “Bondi Blue” iMac in 1998. The iMac saved Apple, giving the company the time to do everything else that followed.

But as we enter 2013, the world is a much different place than 1998. Beyond the aforementioned iPods, iPhones, and iPads, in the “traditional” computing space, everyone seems to be using a laptop nowadays. In fact, something like three quarters of Apple’s Mac sales are now made up of their MacBook lines.

And yet, the iMac still exists.

In the past month, Apple has released the latest iterations of the iMac into the world. I’ve been testing out one version — a fully-loaded 21.5-inch — for much of the past month. Darrell has already posted on some hands-on time with the device, a first look comparing it to the previous versions, and a full-on spec-y review. I figured I’d post some thoughts on how I’ve been using it and where I see the iMac fitting in a computing world heading the other direction.

The second Mac I ever bought was an iMac. And from a form-factor perspective, it actually wasn’t all that different from the way the current version looks. In fact, the 2004 white plastic model, was the inception of the current computer-on-a-pedestal design (the inverse of the desk lamp variety). Apple clearly decided that it liked this concept, and since then it has been refinement after refinement after refinement.

The most striking feature of the current iteration is just how thin it is at the sides — just 5mm. When compared just to the last version of the iMac, this new one looks fake, a dummy window unit, perhaps. It’s something like 80 percent thinner at the sides.

But it’s very real. Once you look beyond the sides, you’ll notice the “hump” in the back where all the goods are actually stored. Even with the component hump, the new iMac consists of 40 percent less volume than the previous versions. (Thankfully, Apple didn’t attempt to shove an optical drive, long-since dead, in the hump.) 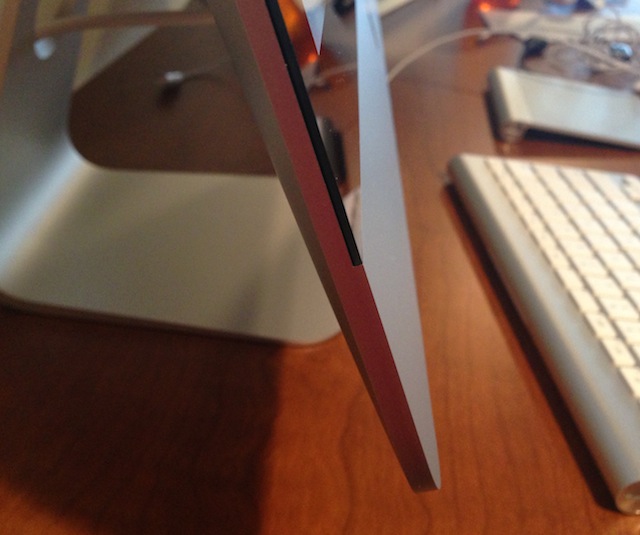 One reason Apple was able to make this new iMac so much thinner is that they borrowed and modified some processes from their other products to make the display itself 5mm thinner. Previously, the iMac’s front panel was laser-welded from the inside, which required more room to maneuver. Now, they’re using what’s called friction-stir welding to put the front right up against the back in a way that any user won’t even be able to perceive.

And since you can’t perceive it, it doesn’t really matter. What does matter is that the screen itself is now significantly closer to the glass. Just as with the newer iPhones, the screen is now laminated to the display, removing a 2mm gap that existed before. Again, this is perhaps hard to see without a direct comparison, but you should perceive the screen feeling closer and more vibrant as a result.

More importantly from a usage perspective, the screen is now 75 percent less reflective. On my old iMacs (I’ve had three in total), they were all a bit like looking into a mirror if I was using any application with a dark background or if it was sunny outside. Now, you’ll only get hints of your reflection in the black trim around the display.

Unfortunately, the screen is not a “retina” screen. While it is the best screen ever found on an iMac, those who use retina displays regularly now will likely be at least a little disappointed. I’m in that camp as I replaced my old iMac with a 15-inch MacBook Pro with a retina display earlier this year. Going back, the result, particularly with text, is definitely noticeable.

But it may matter less to you depending on again, if you don’t regularly use a retina display, and/or if you use the iMac relatively far away from your head (pixels are harder to see the farther away you are from the screen, hence why the iPhone has a higher pixel density than the MacBook Pro, but both are still “retina”). I’m using the iMac at my standing desk, relatively closer to my face, so I notice.

For many, the additional screen size alone will trump the lack of retina. 21.5-inches when you’re used to 15-inches is great. 27-inches is even better, obviously. The reality is that we’re unlikely to get a 27-inch retina display anytime soon simply because it’s likely too cost prohibitive. Perhaps we’ll get a retina Cinema Display for professionals first, but the iMac will probably have to wait.

Another element the iMac gives you that a MacBook does not (at least not yet) is the option for a “Fusion Drive”. Marketing terms aside, this is a great method of compromise that Apple has come up with. Essentially, you have both a solid-state flash drive and a traditional hard drive in the machine, and software found in a slightly altered version of OS X Mountain Lion determines what data should go where automatically (based on your usage). This allows you to have the speed of SSD with the storage volumes of a regular hard drive.

This is important because one definite use case for the iMac is to be the main content hub of the house. That means it will need a lot of storage. You can configure Fusion Drives up to 3 TB. On this test machine, I have a 1 TB Fusion Drive installed, and it works great. It feels as fast as my MacBooks with flash drives — something like a billion times faster than my older iMac with its traditional hard drive. 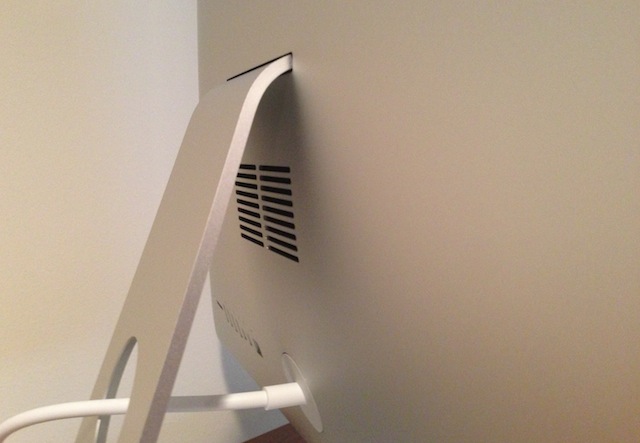 Speaking of that old iMac, one major complaint I used to have about the machine was how hot it would run. If you dared put your hand along the backside, it was very, very hot to the touch. One problem was that the fan used to be found along the top and when kicked into high gear, the machine would push all the heat up there. This new iMac feels much, much cooler to the touch. You can still feel a little warmth along the top if you’re pushing the machine, but it’s barely noticeable.

Now, most of the heat is dissipated through the fan in the middle of the back of the iMac. A few times (while testing games and yes, Flash video), I got the fan to kick on. It’s silent and eliminates the heat well — a huge improvement over the previous version of the iMac. Apple also says that the machine now uses 50 percent less energy overall when idle. Again, this is important for the iMac which I imagine many people leaving on at all times as their media hub.

I keep going back to the “media hub” thing. I guess it’s because I’m trying to figure out where the iMac fits in this world of MacBooks that is spilling over into a world of iPads. Again, the extra screen real estate is great in a home office or at a desk in an actual office. But increasingly, you’re seeing more and more people with laptops that either plug into an external monitor at a desk, or don’t even bother. Retina displays are pushing this issue as well, as more content becomes retina-ready.

Meanwhile, the Fusion Drive is great if you’re going to use the device to store all your media. But with services like iCloud, the need to store those massive media files locally is quickly going away as well. And I have to imagine the Fusion Drive will find its way to MacBooks as well eventually — it’s already in the Mac mini too.

This iMac, with a 3.1 GHz i7 processor and 16 GB of RAM, is definitely the fastest machine I’ve ever tested. But part of my rationale behind the “spec is dead” argument is that there are a ton of machines out there that are now “fast enough” for most purposes. And if you’re doing intensive things like video editing, wouldn’t you still opt for the Mac Pro?

There is no question in my mind that this is the best desktop computer that Apple has ever made. I simply wonder how many people need a desktop computer in their lives going forward. Certainly, everything is trending the other way towards portable and fully mobile computing. And with all computing rapidly advancing towards the “fast enough” threshold (MacBook Pros are there, iPads/iPhones probably aren’t that far behind), the only argument for the iMac becomes the screen real estate. That just reeks of a dedicated screen (or smart glass) that sits on a desk (or your wall) that you push content to from your portable/mobile devices. I fear the need for a stand-alone desktop computer is nearing an end no matter the environment.

But we’re not there yet. And if you’re at all interested in having a desktop machine for your office and/or home office, the new iMac is clearly the one to get. I’m tempted to buy a fully-loaded 27-inch model (which, by the way, allows you to upgrade the RAM to 32 GB). But it’s not a slam dunk that I’m going to — and that has never been the case before. My MacBook is simply fast enough, and because I can take it everywhere, I get much more usage out of it. My desire for the iMac is simply for the larger screen real-estate — but again, non-retina prevents it from being a slam dunk in my mind.

So really, I think I’m just drawn to this machine for reasons of nostalgia. It bears a resemblance to my first iMac, but it’s so much more stunning in every way. And it hearkens back to the product that once saved Apple. 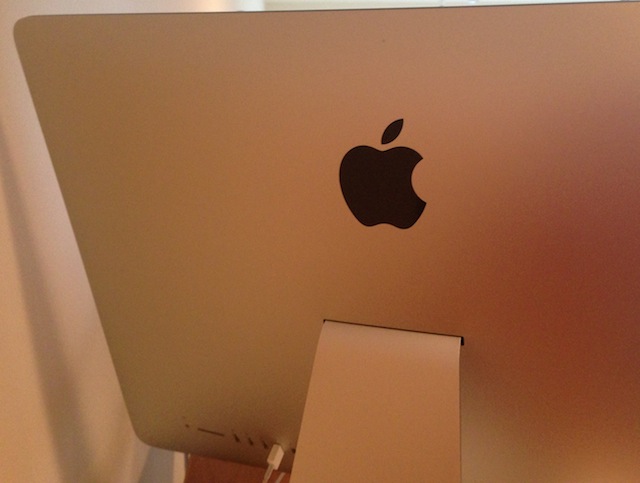