In an attempt to shed its web-based search roots in favor of a mobile-only media format, Qwiki today is unveiling an iPhone app that looks to channel the noise of mobile over-sharing through curated storytelling. The release leverages the combined success of the company’s iPad app and publishing tool, which allowed content creators, media organizations, and everyone in between to develop guided story-telling experiences around any subject.

CEO Doug Imbruce says that the new app aims to give users an alternative way to discover, capture and share moments while on-the-go by automatically pre-selecting a user’s best pictures and videos and creating a video-based slideshow, complete with a soundtrack from your music library.

In 2010, Qwiki captured the TechCrunch Disrupt Cup, thanks to an ambitious product that sought to transform the way people consume information online. Like an interactive, multimedia version of Wikipedia, Qwiki essentially combined images, audio, and video for pretty much anything you could search for on the web into multidimensional, narrated movies. Controversial and well-funded by big names from the start, Qwiki has has had plenty of ups and downs and seen a number of changes in directions since. Two years later, Qwiki’s evolution has finally led to what it hopes will be its decisive pivot. 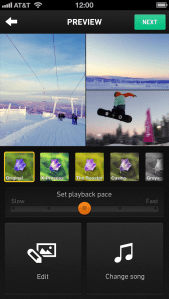 The idea with the new iPhone app, Imbruce says, is to give users the ability to share their experiences in real time, whether in full moments or experiences, packaging them in 30-second mobile videos. Users can watch, comment on, and “like” each piece of media individually, easily sharing those Qwikis via Facebook and Twitter, as well as within Qwiki’s community. This allows them to discover and interact with other Qwiki users, bloggers and media outlets, while customizing their video slideshows by adding or removing pictures and videos, inserting captions, selecting filters and editing the soundtrack auto-selected by Qwiki.

In essence, the new Qwiki is like Viddy meets Slide (with automation), in that the app automatically pulls pictures and videos together from events you’ve captured on your phone and produces a short movie. The app automates those moments and the pacing between frames, adding its own transitions and pulling in an appropriate soundtrack. 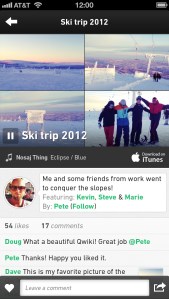 If you don’t like what Qwiki has automatically selected, you can edit away. The whole thing is customizable, so you can add photos it missed, take out ones that include your ex-significant other, and add text and filters as you would for a slideshow. And to that point, Qwikis can be viewed either as reels or as actual photo albums, allowing friends, family and stalkers to explore your birthday, graduation, company barbeque (etc.) stories at their own pace.

Qwiki’s iPhone app has been in development for over a year, and that extra time spent shows. The user experience improves on that of its iPad app, especially for the iPhone 5, as Qwiki developed it significantly for the latest generation.

The CEO says that he believes this first version of its new mobile product will take it out of the realm of gimmicky novelty and into the realm of real utility, removing the hassle of curating your photos, links, videos and moments into galleries, instead giving you access to one-tap storytelling. Less work, more enjoyment. And, since Qwikis are embeddable, you can post them on your Tumblr or your friend’s website. Portable web-compatible Qwikis from a mobile-only world. Mind. Blown.

The app is still in invite-only beta, and the startup will be granting access gradually over the next few weeks. For readers interested in testing it out, click over to the Qwiki’s homepage here and enter your email address. The first 100 or so readers will get immediate access. 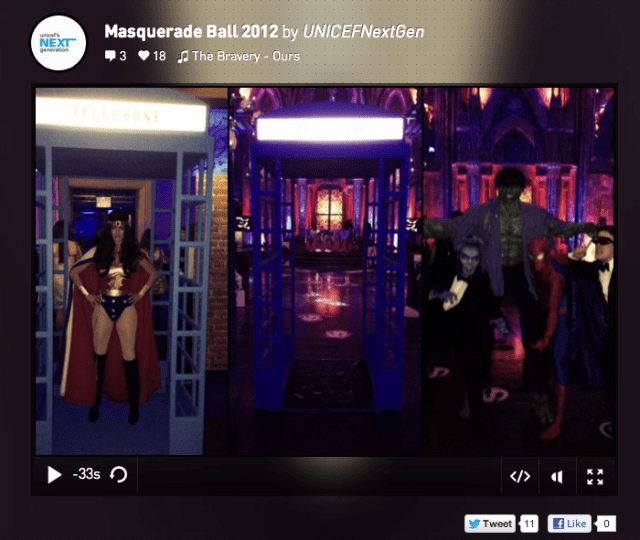