So you’ve got all these crappy videos on your phone. Want to make them watchable? Givit wants to make it easier for users to edit videos on their mobile devices with an iPhone app that lets them stitch mobile videos together and render them into actual, shareable clips.

The latest version of the iPhone app is focused on sharing and importing videos from new sources. Givit has integrated with Twitter to enable users to send videos directly to the social network — but it’s gone a step further than most video apps, by taking advantage of Twitter Cards. The integration will let viewers watch videos edited on the app to be viewed in-line directly through the Twitter website or apps. 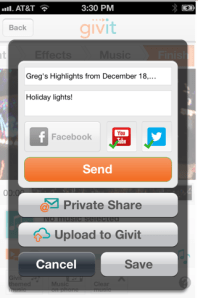 In addition, Givit has added features to improve the editing workflow. Users can now highlight clips within the app, even while they’re recording. That will allow them to quickly recognize the parts that they’ll want to keep in their edited videos. It’s also made clipping better, with frame-by-frame controls and advanced editing features, as well as the ability to add new clips at any time.

While Givit historically has been used for editing videos that are natively stored on mobile phones, the company wants to give users the ability to import them from other places. And so it’s added connections to SkyDrive and Dropbox to make accessing video content there easier. That will increase the amount of content that they can potentially edit and stitch together, which could increase the number of videos that are made shareable. Hooray.