Forrester Research just published its annual “State of Consumers and Technology” report. As usual, it’s chock-full of interesting statistics about how U.S. consumers use the Internet, but the most interesting statistic is probably that the overall online penetration rate in the U.S. has stabilized at 79 percent (the same number Forrester found in 2011). That’s the percentage of U.S. adults that go online at least monthly. What has changed, however, is how many adults go online at least daily: In 2011, that was 78 percent of U.S. adults, and in 2012, Forrester reports that 84 percent now go online at least once per day.

One of the reasons for this is, of course, the growing smartphone and tablet penetration. Forrester found that about half of U.S. online adults now own a smartphone and two-thirds even own multiple connected devices. Tablet adoption doubled since 2011 and is now at 19 percent. 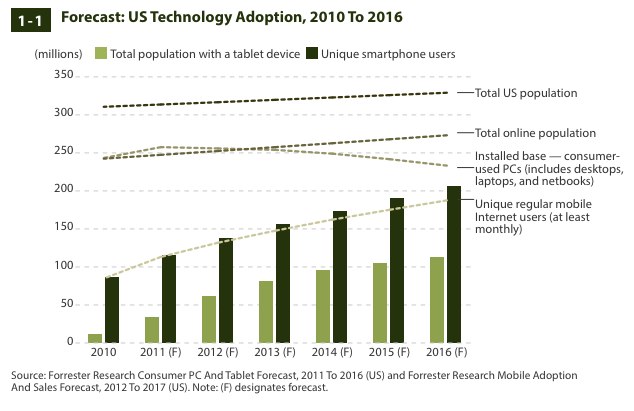 One trend that the Forrester report, which includes survey data from nearly 60,000 consumers in the U.S. and Canada, also notes is that 43 percent of consumers now connect to the web with their TVs. Forrester, just like similar surveys, found that most of these users rely on their game consoles to do so (42 percent), while connected TVs (19 percent) and Internet-connected set-top boxes like the Roku or Apple TV are only being used by 14 percent. 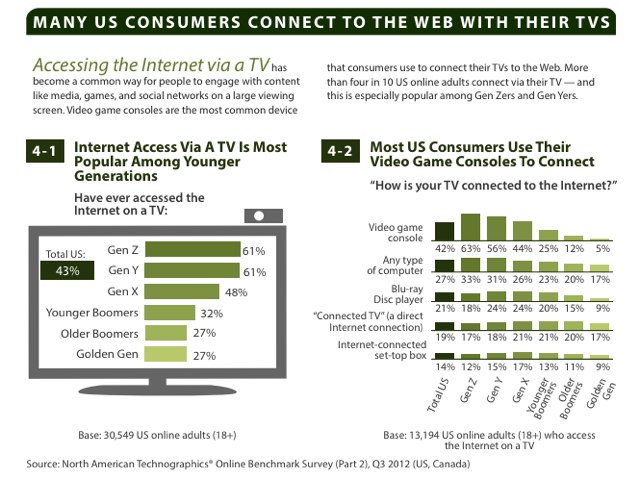 It doesn’t come as a surprise that Forrester’s research also found that there are still distinct usage patterns among different generations. The 18-to-23-year-old crowd, for example, is far more active on social networks than anybody else. About 70 percent of these Gen Zers, Forrester says, “visit social networking sites daily” and 85 percent visit Facebook at least once a month. Gen Y (24-32) is more likely to own a tablet (about 25 percent) and smartphone (72 percent) and Gen Xers (33-46) are most likely to spend their money by shopping online (an average of $561 in the past three months compared to an average of $449 for all U.S. shoppers).

Once you get to the Boomers (47-67) and the so-called “Golden Generation” (68+), technology adoption obviously lags quite a bit. Older online adults, for example, are more likely to use desktop computers at home and are less likely to own tablets and smartphones. Still, even among this group, tablet adoption has doubled to 14 percent since 2011.