When Instagram began to pull its inline previews of photos out of Twitter almost two weeks ago, many did not take that turn of events too well. Consumers like things easy, and clicking out of one app or site to go elsewhere is not always the best experience.

Instagram, it appears, did this to drive more traffic directly to its own site — a move complemented by a couple of others, such as the newly expanded instagram.com with user profiles, and today’s changes to Instagram’s terms of service and privacy policies, which included new developments in advertising on the service (specifically: it is coming, you may not know very obviously when it is there, and you might just end up part of it).

So did it work?

According to figures for the first two weeks of December, produced for us by Onavo — the Menlo Park-based analytics company that tracks trends in app usage — the short answer is yes … and no.

As you can see in the table below, Twitter has been a well-used platform for viewing Instagram content. Onavo notes that before December 9 (the day the changes in card usage began to take effect), on average about 16% of Twitter for iOS users would view Instagram pics from within the Twitter app daily. At the same time, Twitter was an awful direct traffic referral partner, with just 0.2% of visits to instagram.com coming from Twitter. (This doesn’t mean that Twitter’s Instagram integration didn’t have an indirect impact on the native app’s popularity.)

The changeover was fairly dramatic, though. After the 9th, views on Twitter dropped and then eventually went down to zero as the card feature disappeared completely.

At the same time, people have continued to cross-post their Instagram pictures to Twitter, so the social network has now become a referral site for instagram.com: users have to click on the links and go through to Instagram’s site to see photos.

But that shift has not yet made up the difference for Instagram. Onavo notes that daily visits to instagram.com have gone up 25-fold in the last two weeks: now 5% of all Twitter for iPhone users visit the instagram.com site, from a paltry 0.2% before. But that is still 11 percentage points less than the number of people that used to look at Instagram content inline. 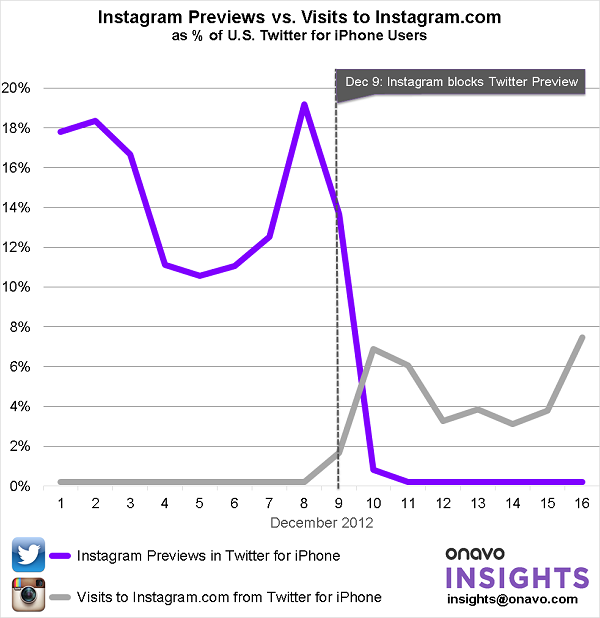 But traffic referral or not — and Twitter/Instagram frustration or not — for now, that switch does not appear to be having an impact on either site when it comes to overall traffic. “On the apps front there does not seem to have been much of a shift in daily active users for either Twitter or Instagram that can’t be attributed to the weekend or new app versions,” the company tells me. 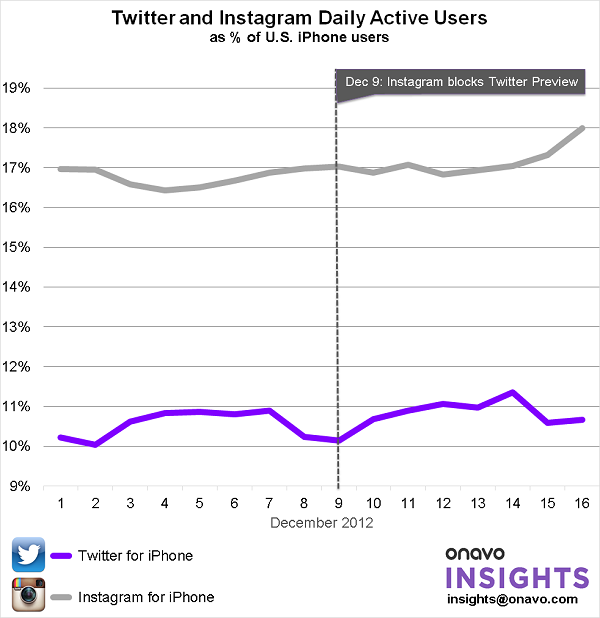 I’m going to check back with Onavo in a few weeks to see how the data is holding up. Anecdotally, I feel like I’ve been seeing an increasing number of Twitter-created pictures in my stream, fewer Instagram links, and not so much in the way of an influx of new/newly rejuvenated services like Flickr just yet.

I mentioned this earlier today (on Twitter, of course), and couple of people, it turned out, were wondering about the same thing. There are other reasons, though, that Instagram might end up with an upswing or decline in usage — negative user opinions of app updates being one, spam being another, and those aforementioned advertising moves being perhaps a third.

For the record, I’m a big fan of Instagram, loved the ability to look at content inline on Twitter and was annoyed by the change. I think I get what Instagram and its new owner Facebook are trying to do, but also wonder if they could have approached it in a different way that didn’t feel like a compromise of the user experience.