Crowdfunding campaigns employ all kinds of logical and emotional appeals to get you to dig into your wallet. But in just the past few months, there’s been a rush of different products seeking to replace yours. Why Kickstarter — which screens all projects — saw fit to greenlight 10 variations on a theme in so short a time is something only its curators can say.

Not only have most of them sought to minimize the traditional pocket stuffer with something far thinner and lighter, but most won the backing of the crowd, as well. However, as many of them have been smaller-scale projects, and as wallets tend to be popular gifts, a few have already begun shipping, so that they can spend a little while sitting in a stocking before moving on to a pocket.

Backed: SlideR. Like many of the wallets that have been funded through Kickstarter in the past few months, the slider is a simple fabric-and-elastic affair that leaves parts of your plastic exposed. Its distinguishing namesake feature is the ability to slide the elastic band along the width of the sleeve in order to hold your cards tight or facilitate removal — a simple enough concept to attract nearly double the $8,500 goal and start shipping. 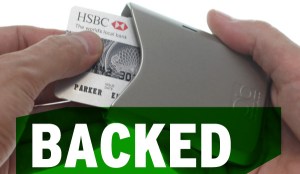 Backed: Obtainium Wallet. The Obtainium wallet may be made of aluminum and not unobtainium, but its space-age look conceals a bi-fold design that contains gripping compartments to protect its contents from mud, moving cars and other indignities. Slim compared to conventional wallets but bulky compared to its Kickstarter contemporaries, the tight-jeans-compatible sturdy cache has more than doubled its $25,000 goal with about 20 days left in the campaign. 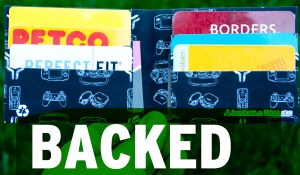 Backed: Inevitable Wallets. Tyvek has long been a material used in thin wallets and the material of choice for wallet designers Johnny and Jill Burt and Caden, their four-year-old son and star of both their Kickstarter video and wall. Reliving the spirit of so many slugfests in their hometown of Las Vegas, the Burts take on both leather wallets and ultra minimalist affairs that they say sacrifice functionality for size. It’s on, and moving forward for the Amaranth clutch wallets and Liberty Series men’s bifolds thanks to the campaign eking past its lightweight, yet durable, $3,000 funding goal. 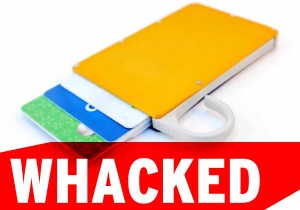 Whacked: The Flip n’ Grip Wallet. The Flip n’ Grip’s unusual trademarked name is a good fit for its unusual appearance and card presentation system. The six-card holder plus optional money clip can store up to six cards that pop up in a stepped presentation when the lever on the side of the device is pressed. There’s also a hook that you or pickpockets can use to easily remove your wallet from your pocket and which, we may infer from the video, makes for endless gunslinger-style twirling fun. Because if there’s one thing you don’t care about having fly off your hand to locations unknown, it’s your wallet. Fortunately, the aluminum and stainless steel construction should protect it if it’s run over. The Flip n’ Grip attracted more than $45,000 in funding, a multiple of many other backed wallets, but only about half of the $100,000 sought in the campaign. That’s life in the badlands, fundslingers. 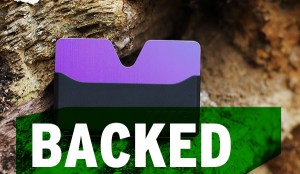 Backed: Vi Card Holder/Wallet. An early Product Design entrant from the UK, the Vi (pronounced like the remade mini-series about deceptively friendly aliens and not like the legendary UNIX text editor) and represents “five intelligent design solutions” — light, compact, elegant, functional and simple. The video is otherwise short on marketing points, letting the product, sort of a mobile version of a desktop business card holder, speak for itself. That it did, as backers provided double the £5,000 funding goal. 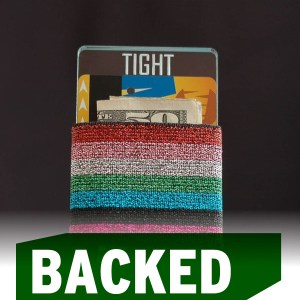 Backed: TGT Wallet. It’s tempting to knock the TGT (pronounced “tight”) wallet for its video’s gratuitous shots of, ahem, back pockets. However, its scraggly inventor balances out the denim closeups with an engaging telling of the story of how the TGT came to be from its humble roots as a thick red rubber band holding together another kind of green: a broccoli stalk. Certainly one of the most fashion-forward of the lot, it ventures beyond the requisite credit cards and oft-afterthought cash to feature a pocket that can accommodate a USB flash drive or wrap around an iPhone. It looks as though getting cards and cash expeditiously out of the TGT might be somewhat HRD, but backers didn’t seem to agree, contributing almost $300,000 more than the original $20,000 funding goal. 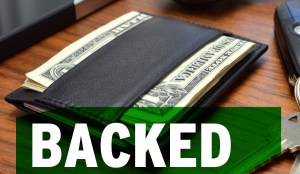 Backed: Capsule Minimalist Wallet. In his Kickstarter video, Robert Sha has a frank discussion with you about what he sees as the chief shortcoming of many thin wallets, their giving short shrift to the good old case. To remedy this, the Capsule Minimlalist wallet includes a more generous CashStrap™ that can accommodate a single folded bill or a stack of them, whereas many other minimalist wallets require you to double-fold, which of course adds thickness. The result is a minimalist wallet that looks more traditional but offers good functionality. Over 2,400 backers offered $100,000 more than its original $16,500 goal. 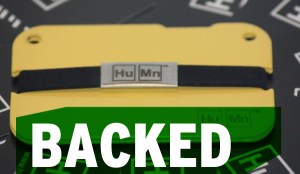 Backed: HuMn Mini Wallet. HuMn is a returning Kickstarter alum as the original HuMn wallet, funded to almost $300,000 back in February and recently featured on Fab.com. The original and its smaller successor are of the spreading elastic band genus of minimalist wallets. What sets it apart is the ability to use either one or both aluminum plates when you want to lighten your load even further, although doing so requires taking off the elastic band and tucking all your cards and cash back in again. The Portland-based designers didn’t raise as much cash as last time, but still brought in more than $80,000 from backers, coasting past the $50,000 goal. 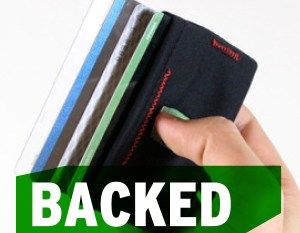 Backed: Dash Wallet. The one-piece Dash wallet, named after the designer’s dog who sent his previous wallet to that Great Pocket in the Sky, is another card-centric conveyance focused on easier retrieval of key credit cards. It’s card-sorting features might not be as sophisticated as the Flip n’ Grip’s, but is more advanced than that of the SideR. The killer feature is a small square hole in the side that enables you to partially pop out a credit card for a quick swipe. With about 40 days to go, the campaign has already surpassed its modest $10,000 goal. 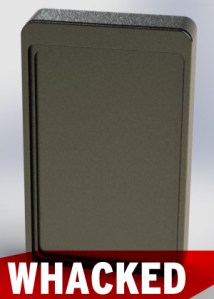 Whacked: Transcend Wallet. The stainless-steel Transcend by the Boise-based spousal team of MTS not only transforms “from minimalist to maximalist” by switching its slick sliding compartments, but it protects your valuables in two ways — via its stainless steel shell and via a special hidden compartment. Alas, neither was enough to protect the project from insufficient funding and the project fell on its sword. It was clear it would not make its $30,000 goal to enable local production in Idaho. The team holds out hope of returning to Kickstarter at some point with a lower funding goal for the Transcend, giving those for whom too many crowdfunded wallet options can never be enough.